By and large, I don't care for microbrands. When I see a review of one, usually a dive/sport watch that looks like a Submariner and is powered by a Seiko automatic movement, my usual reaction is, "Or, you can buy a SKX007." Most micros are stultifyingly boring--a catalogue case, a catalogue bracelet, a catalogue movement, usually all tied up with a lot of pretentious copy that reads well on Kickstarter. 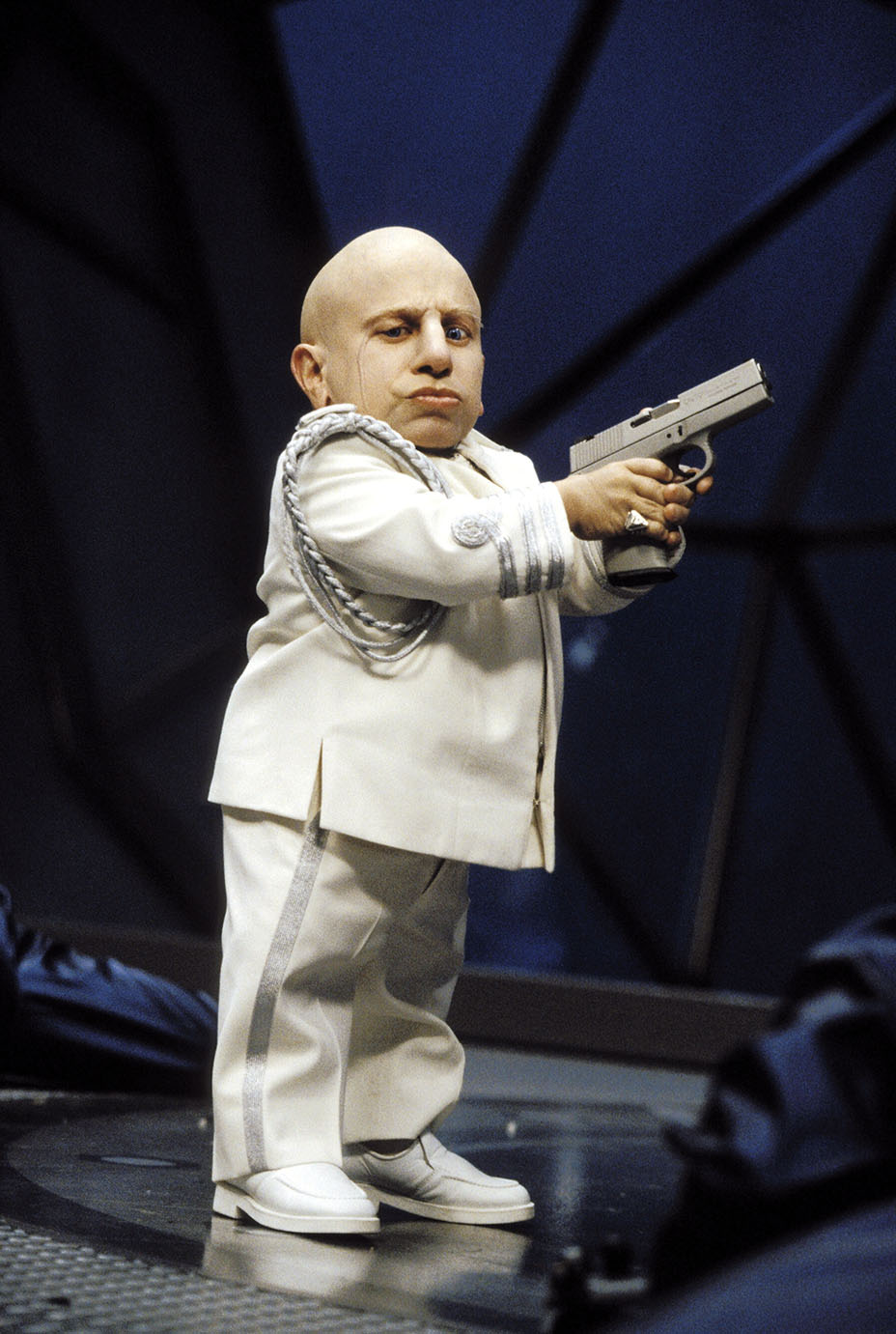 Another reason to dislike micros

Then, out of the blue, I saw a posting from my good pal Ron, aka Alberta Time, regarding a new brand called Atelier Wen; he posted some fine pics of one of their two models at Watchlords, and I suddenly saw a micro that might change my mind: 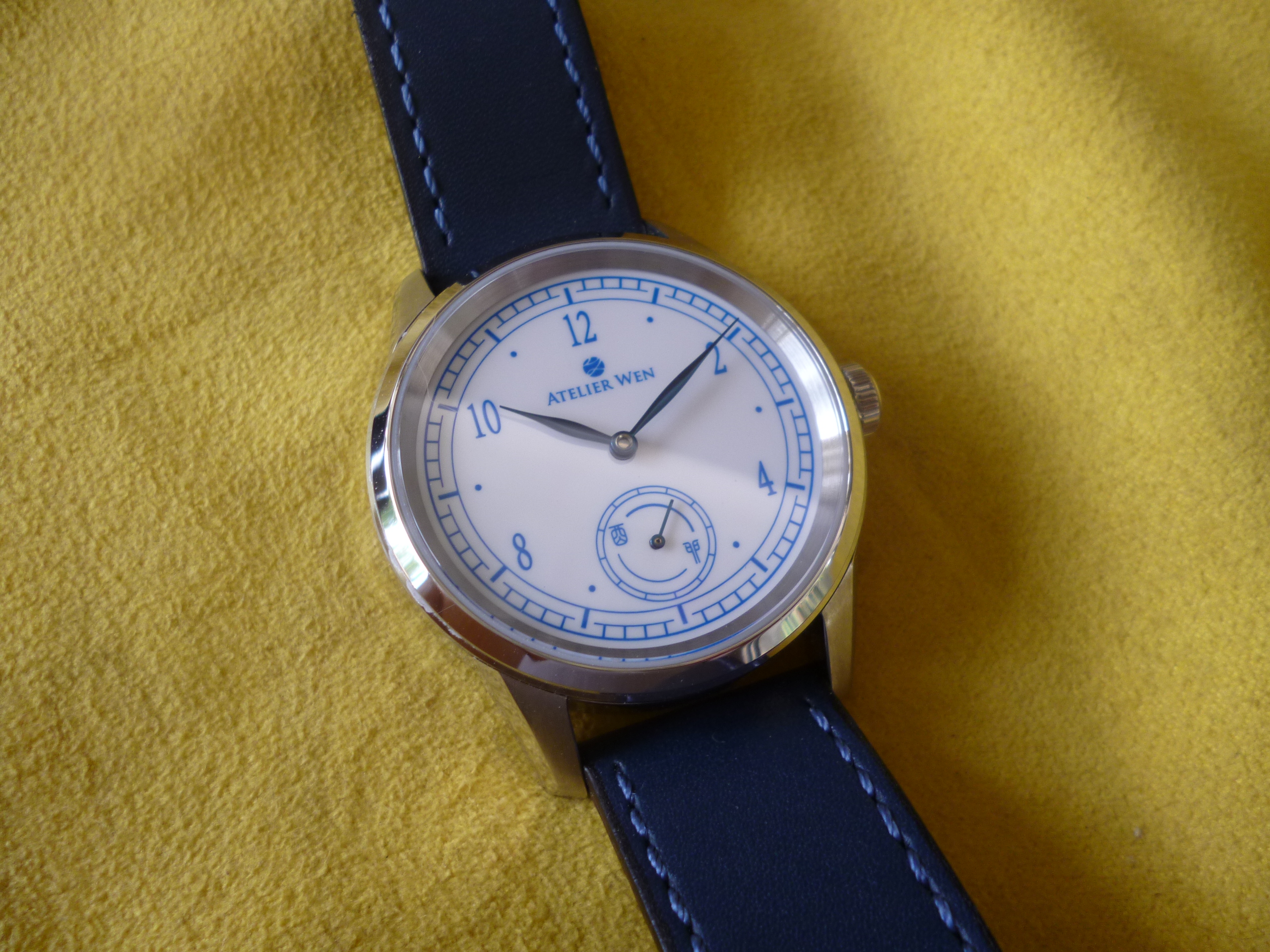 So, would this watch actually make me a micro-believer? We shall soon see.

Atelier Wen was started last year by a couple of young guys who wanted to make a brand that embraced Chinese horology. Through Ron's good (!) offices, I got in touch with one of them and he kindly sent me a review sample a few weeks ago.

The Hao comes in a nice cardboard sleeve, with a couple of extra straps with quick-change pins; as I am a smoker, I only wore the watch with the supple blue leather the watch came on as to not ruin any more straps than I had to. The Hao is nicely sized at 39mm across, 42mm with crown, and 46.5mm lug to lug. The lug width is 20mm, so strap changes should be easy. So far, so good; then I measured the thickness of the case, and it came out just shy of 12mm--not necessarily too thick, but it makes the watch seem a little out of scale, like the ratios were slightly off kilter. The case is stainless steel, with some nice polishing and clean edges--not exactly high-end Grand Seiko finishing, but pretty damned good, anyway.

The movement is a 32 jewel Peacock SL3006 automatic, which some call a clone of the ETA 2824. It runs at 8 beats per second and has a power reserve of around 40 hours. I was advised by Ron that he trusts these movements, which are adjusted to five positions and Atelier Wen claims an accuracy of +/- 10 seconds a day. I'll take Ron's word for it, since he's forgotten more about Chinese horology than I'll ever know. I do know that the Hao I got runs very accurately indeed--it's a little difficult to track, since the seconds subdial is pretty small and not indexed, but I got about -1-2 seconds a day out of it, and that was very stable. Clone movement or not, that's remarkably impressive.

However, the big story here is the porcelain dial: 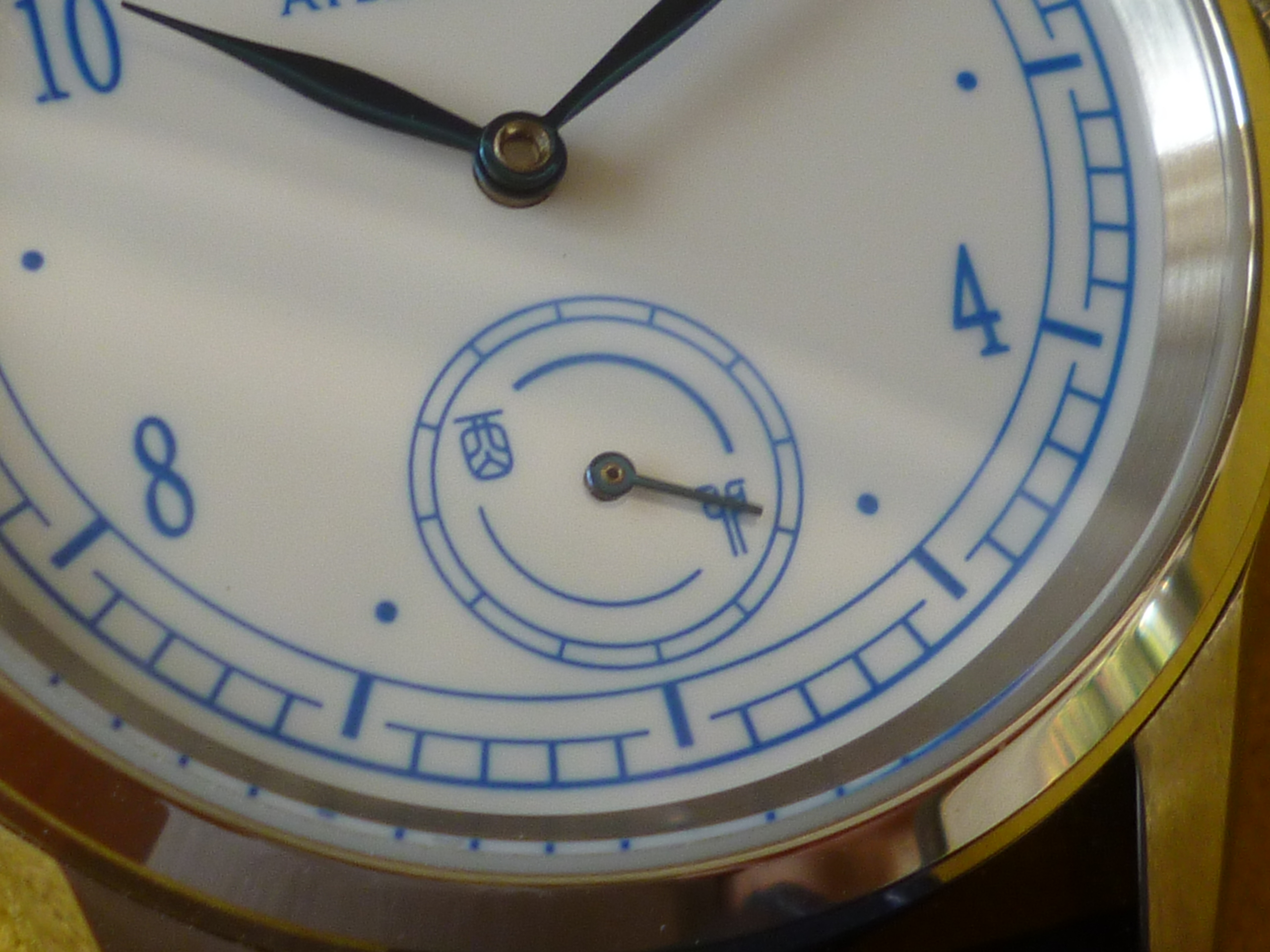 Which is very finally made and really very attractive. The blue printing is superbly executed, and even the handset: 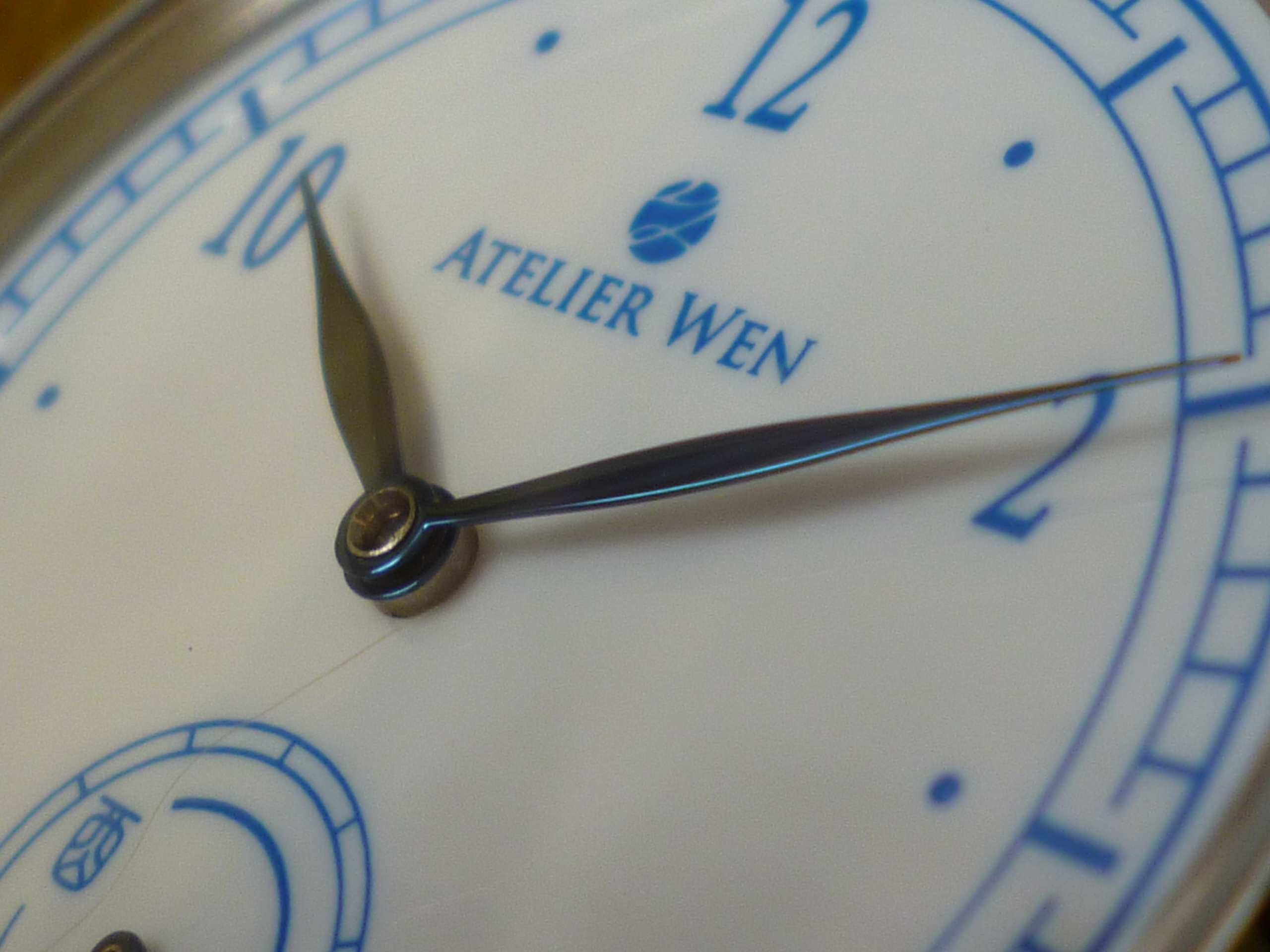 is furnaced blued and finely wrought. Really, you'd have to get into Grand Seiko or one of the mid-to-top range Swiss brands to find a better handset. This being a dress watch, there is no lume.

Flipping the Hao over, you get a nice caseback: 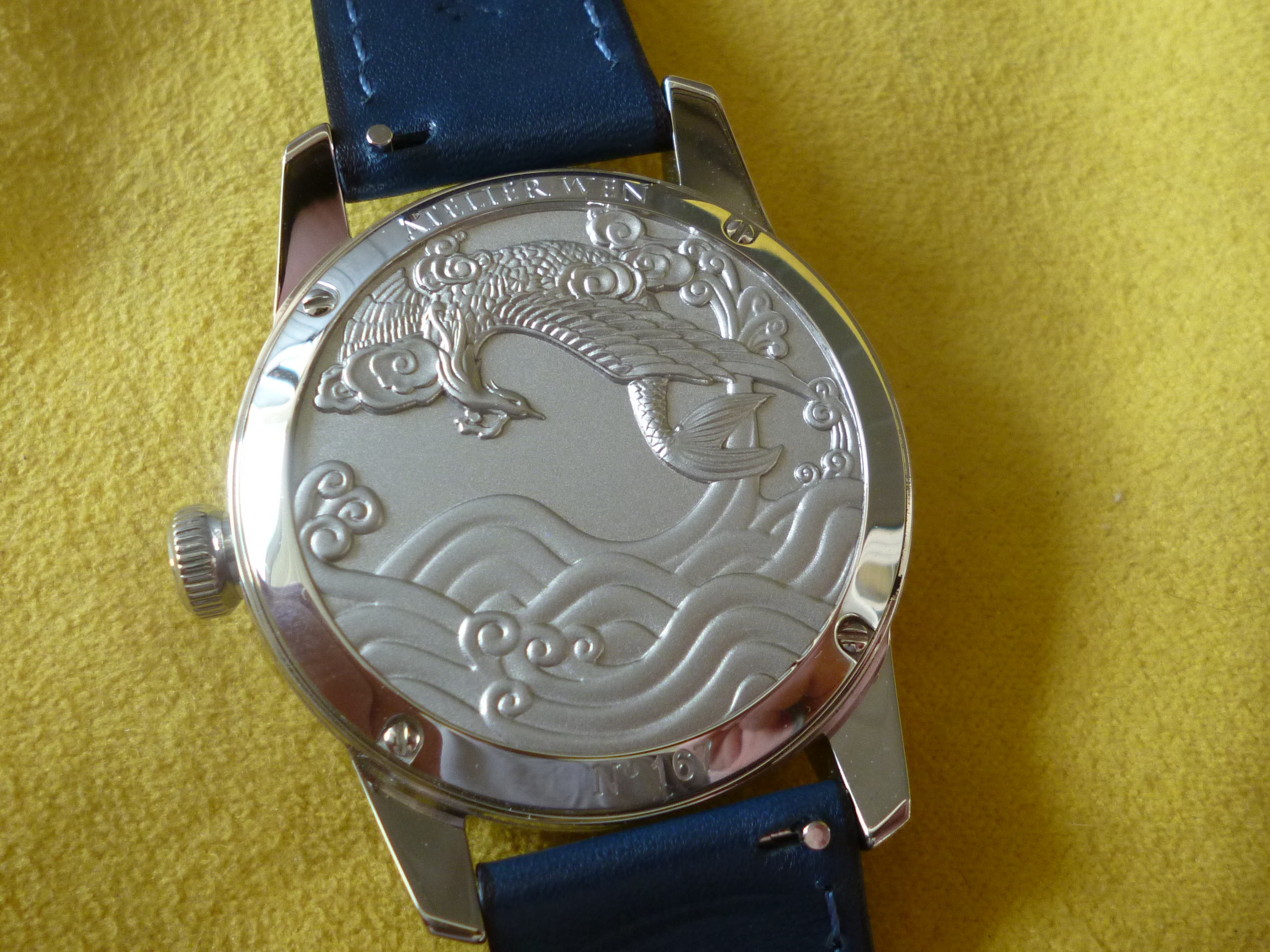 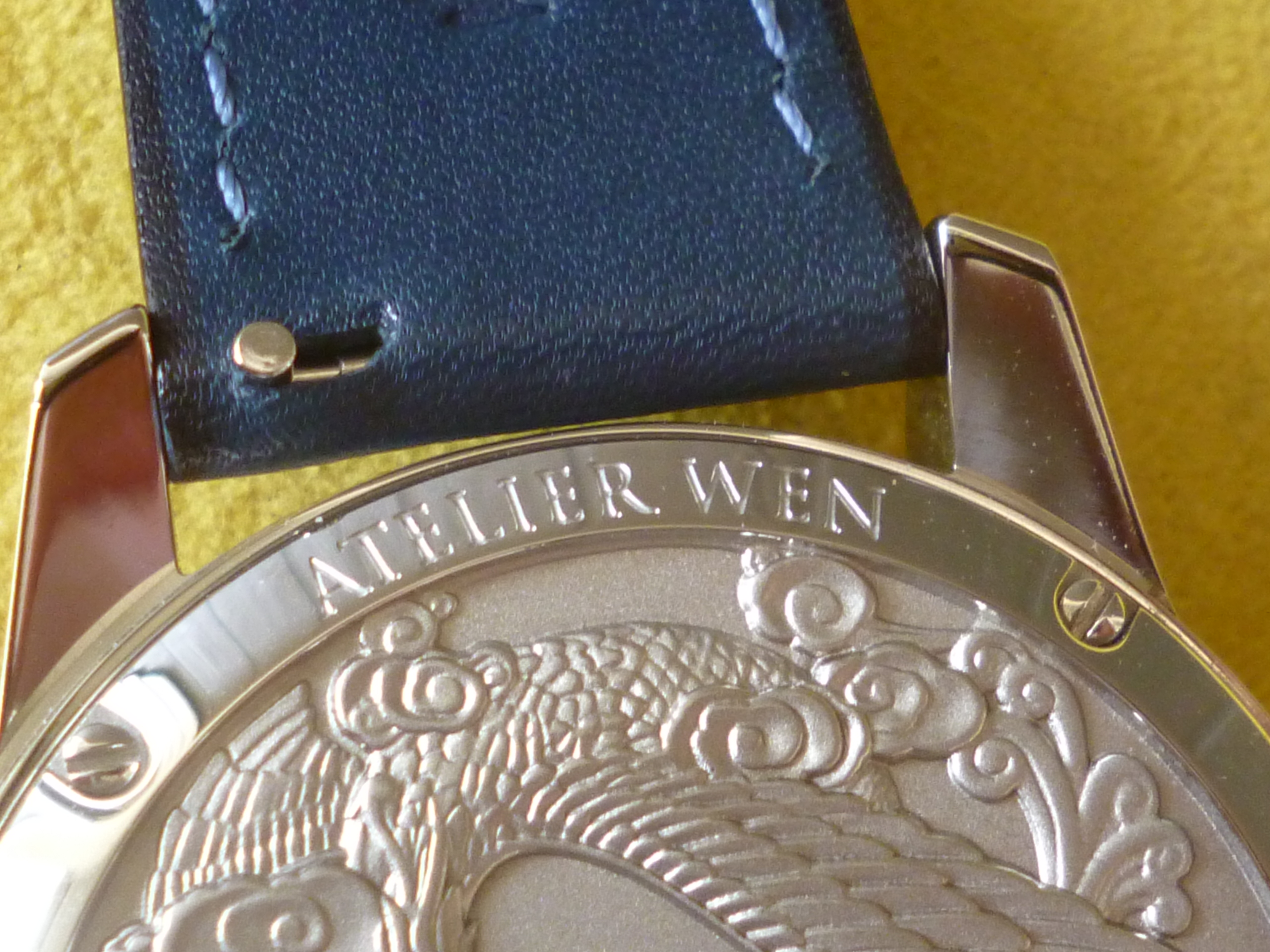 I don't know if this caseback was stamped or cut, but if it was stamped, they did a great job. Also, little things kept surprising me about the Hao, like how they hide the branding on the underside of the buckle: 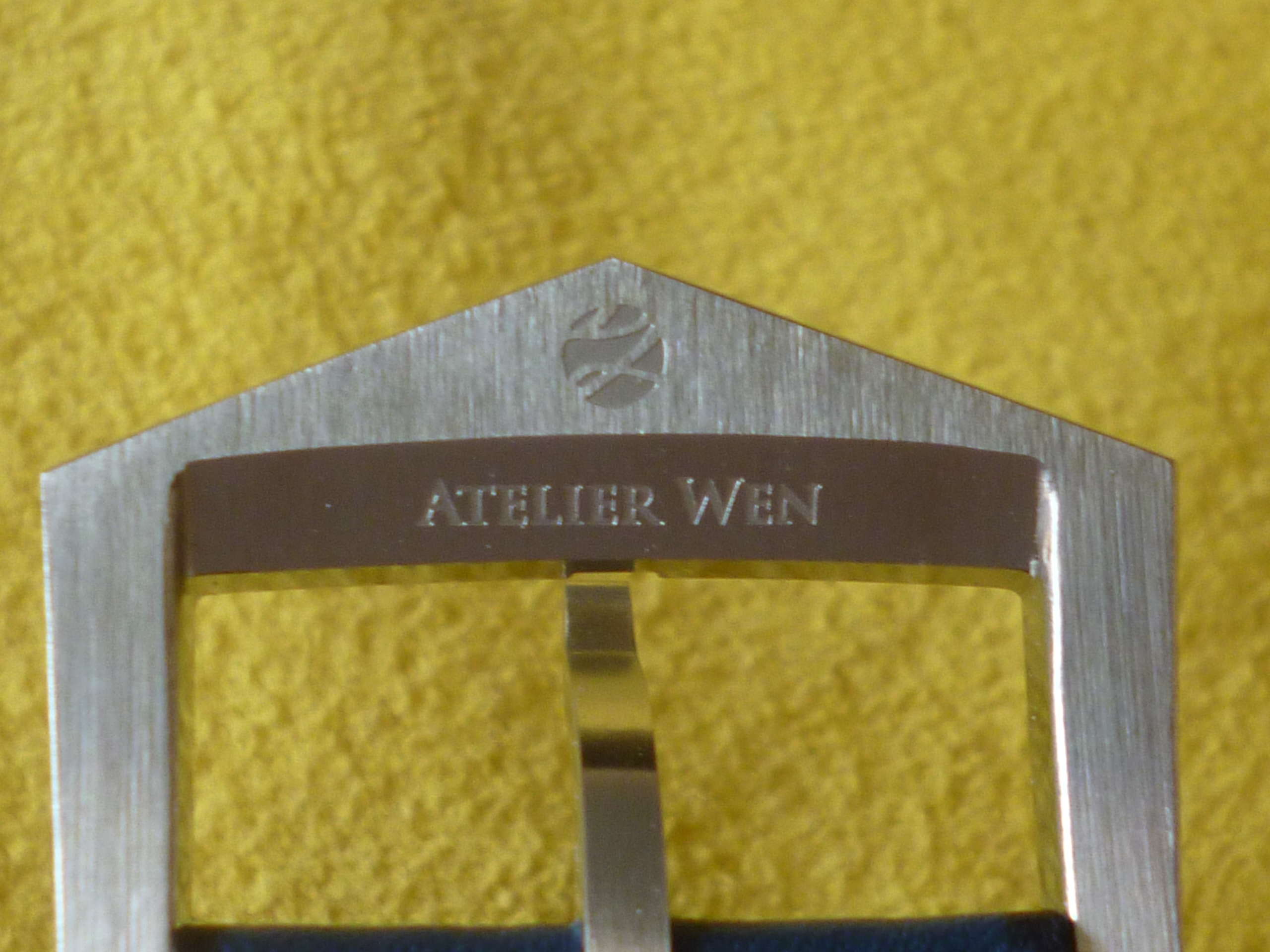 The strap is good, and had minimal break-in. The case finishing, like I said above, is very good: 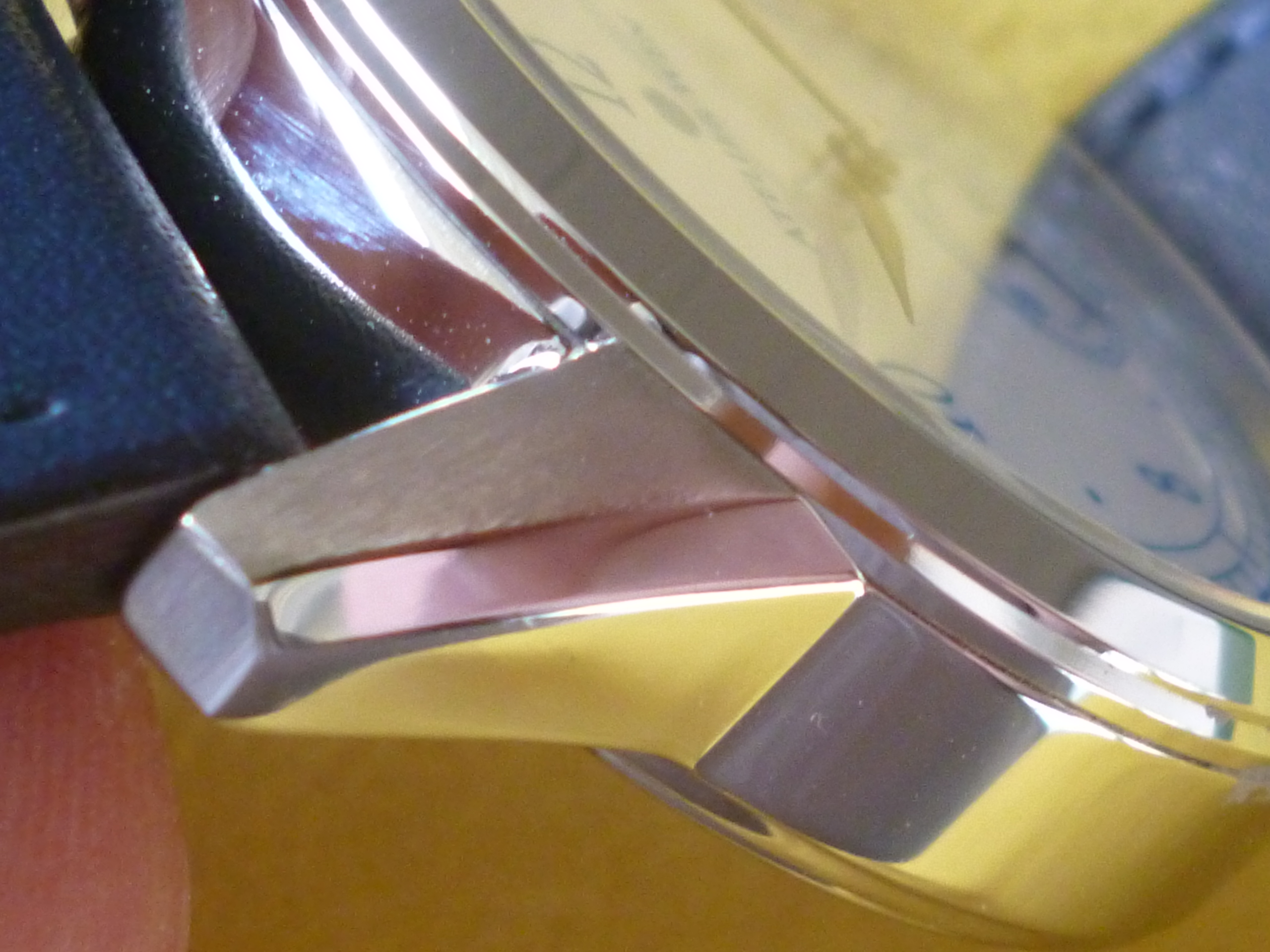 The crown, alas, is not a strong point: 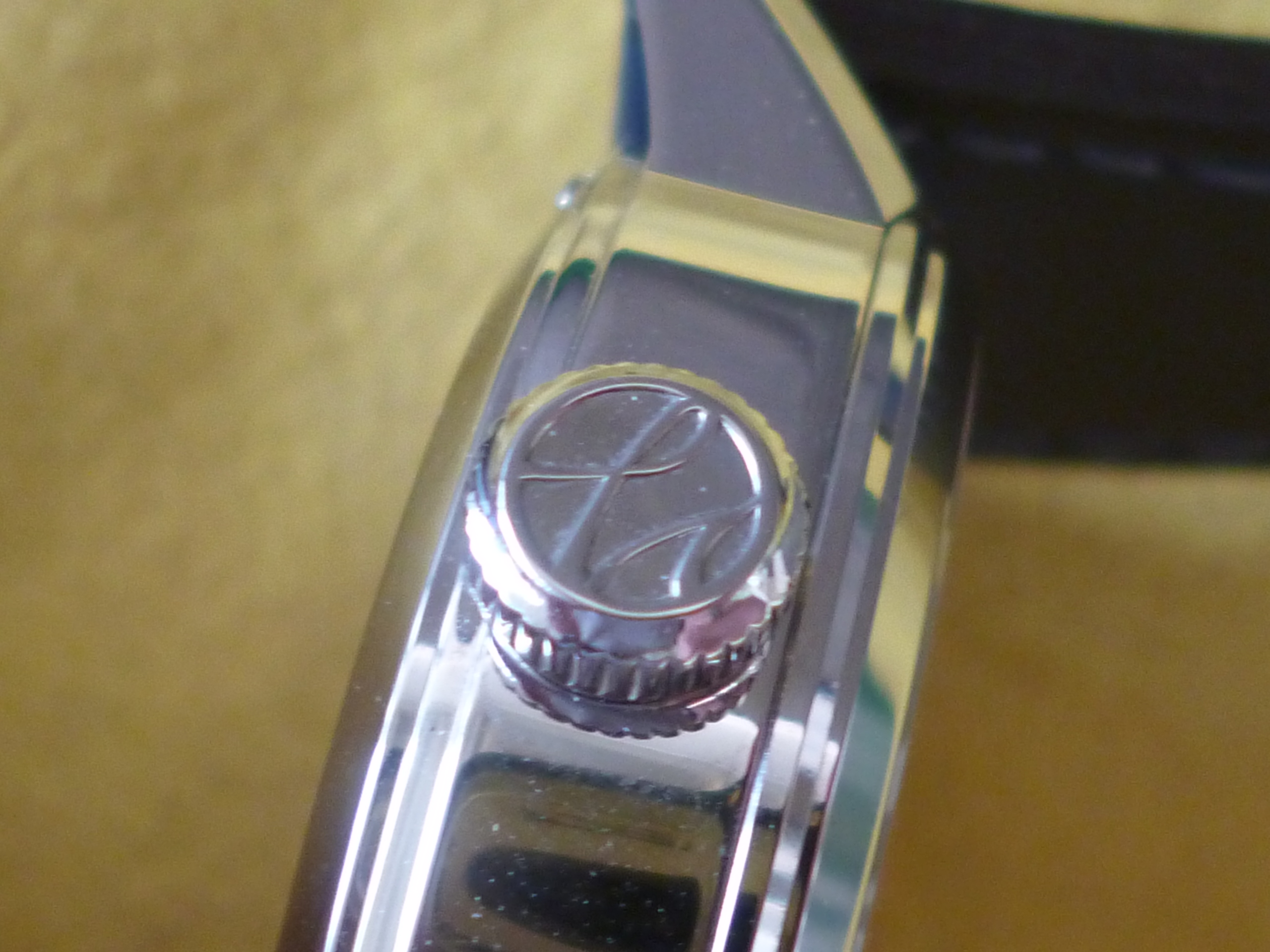 It's push-pull, but extremely stiff--indeed, when I was first handling the watch, I thought it was screwed down. It's also pretty small, and it's difficult to find purchase on it when winding. However, over the days I wore the watch (in between other watches in my rotation) I noticed that the crown loosened up a bit.

Now, to the money part: The Hao is priced at $720 US, which is a pretty heavy lift for a Chinese watch. However, I spent some time looking at what that money will buy you at a gray market site like Jomashop, and there wasn't, admittedly, a lot there to rival the Hao--a Hammy or two, a few Rados, and some other weird crap I wouldn't want to be found dead in a ditch wearing. So, if you're looking for a dress watch with some very nice design upgrades, the Hao, while not exactly a bargain, isn't a bad investment.

So, in conclusion, did the Atelier Wen Hao change my mind about micros? Not totally, although I liked the Hao very much. Interestingly, it's not even a style I usually like--I prefer sport watches with a center sweep and a date window. However, the Hao is an interesting watch; it embraces the Chinese culture and doesn't bob and weave to hide it, like so many Chinese made micros do. In fact, with the beautiful porcelain dial, elegant sub-seconds, and overall good finishing and design, the Hao is more of a boutique watch, something that Atelier Wen's owners put a lot of thought into. A really fine watch, in many ways. Atelier Wen did good. 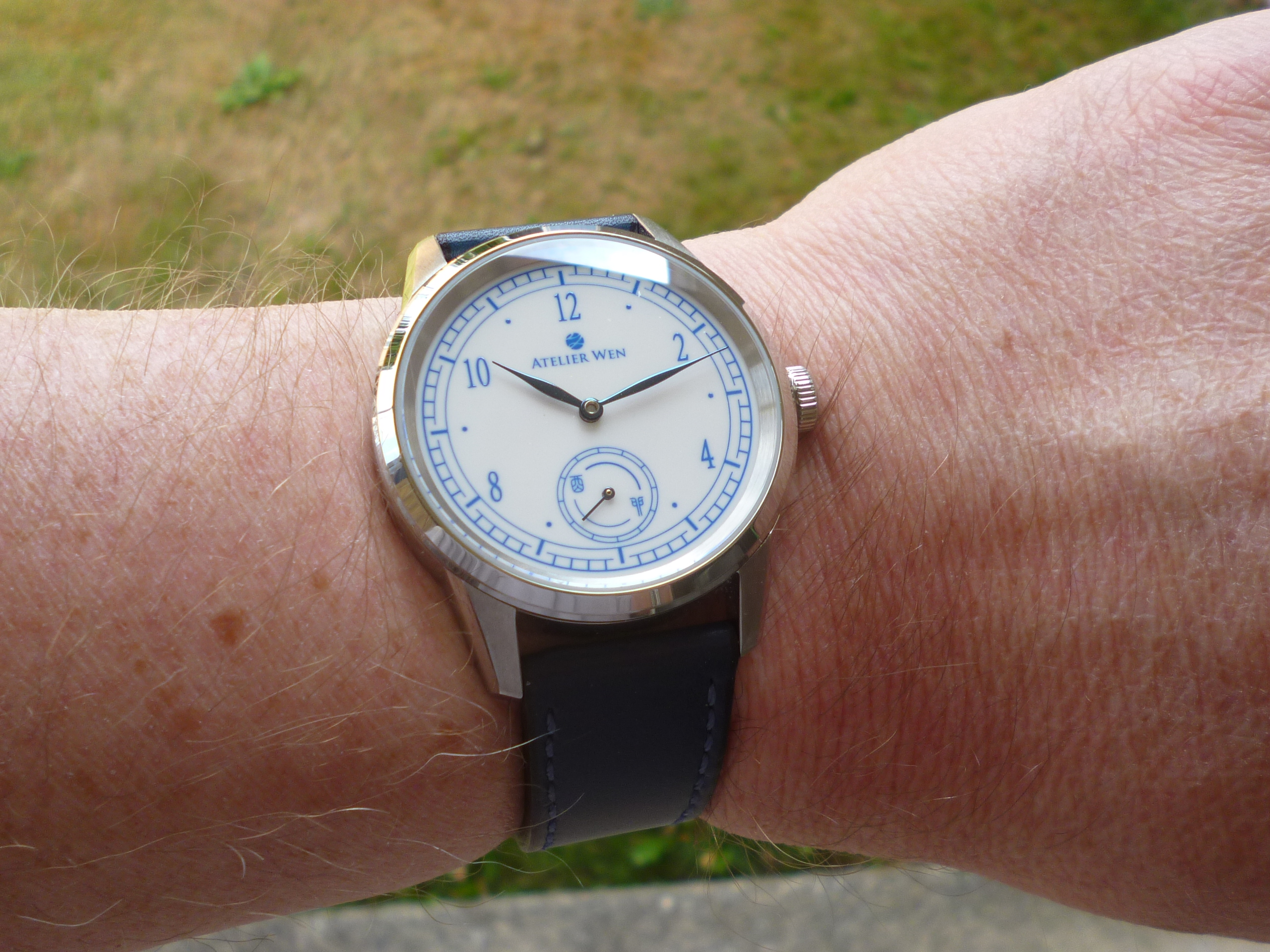 An excellent, somewhat surprising review from you! With the recommendation from AT I can see why you chose to do it.
Very nice pics as well. The porcelain dial is outstanding

Thanks, John! The beef I have with so many microbrands is that almost all of them are boring; this one isn't, and says a lot.

Not really my cup of tea but I do like the porcelain dial and the case back. Good review John!

Very nice! Like that it’s different than the every other watch out there and that they seem to care about their products. Great review!