Guillochè and Brequet - The original and still the best

Guillochè and Brequet - The original and still the best

Guillochage is a centuries old form of hand engraving that utilizes a manually turned and aligned lathe, hence the term "engine-turning" (rose engine or a straight line machine), operated by a craftsman called a guillocheur to engrave designs on a variety of materials within tolerances of one-tenth of a millimeter. The finished product is referred to as guilloché, a term that first appeared in France in the 1770's although the craft dates back to the 1500 and 1600's.

Breguet discovered the technique while visiting London where it was often used to decorate wooden furniture or printed on bank notes, official documents, and certificates to prevent forgery. Many of the patterns used were adapted from early architecture using the decretive patterns incorporated on buildings like the Pantheon and the Coliseum, for example. These designs can be found on paper, gold, silver, enamel, wooden, and ivory works of art and on functional pieces.

While the technique had been applied to the covers of pocket watches and movements, Breguet was inspired to engrave his watch dials in the same way, becoming the first to create a guilloché dial in 1786. Producing an engine-turned dial is a long and painstaking process that begins with making the plate that is to be ultimately fashioned into a dial.

Brequet set out to create designs that complimented and mirrored the intricacies of his movements while adding to the legibility of the dial from virtually any angle as the etched lines and resulting shapes reflected light differently than did polished surfaces. This also made the hands more visible allowing Brequet to craft the iconic furnace-blued Brequet hands, still a defining element of the manufactures' present day watches.

While the engravings gave the dials rich texture and readability, utilizing different patterns on the dials also served to esthetically separate one area or complication on the dial from another. 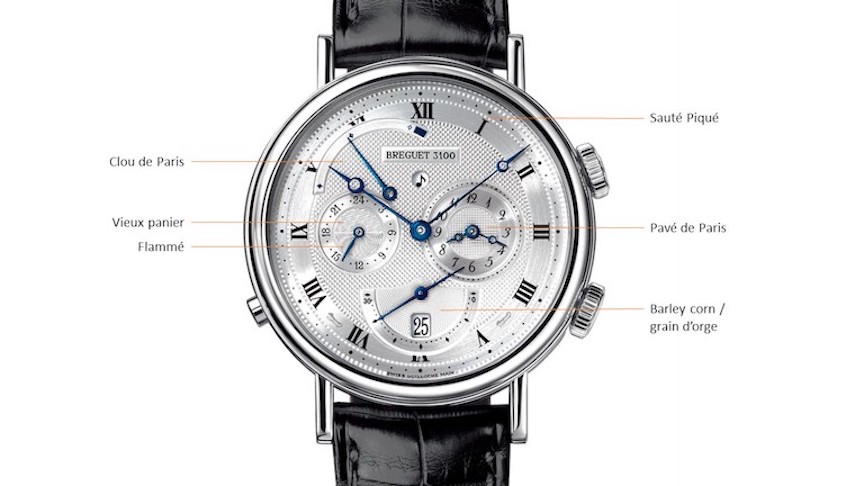 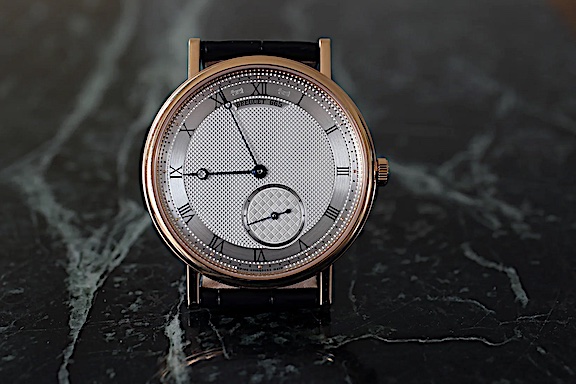 *A little trivia passed on by my watchmaker when I was a youngster: The Claus de Paris aka the hobnailing pattern is so named because the shape of an individual element resembles the head of the cobblers nails used to fasten the soles of the boots of the day to the uppers. The nails were driven through, hammered over flat, and then covered with the insole.

Smooth to start with, the solid gold dial plate is first worked with a hand graver to outline and hollow out the areas of the dial reserved for such indications as the power reserve, the phases of the moon, the subdial for the seconds and others, depending on the model. (Brequet)

This process alone can take up to a couple of days to complete once the plate has been cut and prepared, again, depending on the complications.

With a precision of a tenth of a millimeter, they engrave intricate patterns reflecting their uncommon virtuosity. From start to finish, engine-turning depends essentially on the craftsman’s sharp eye and steady hand, of which the lathe is but an extension.. 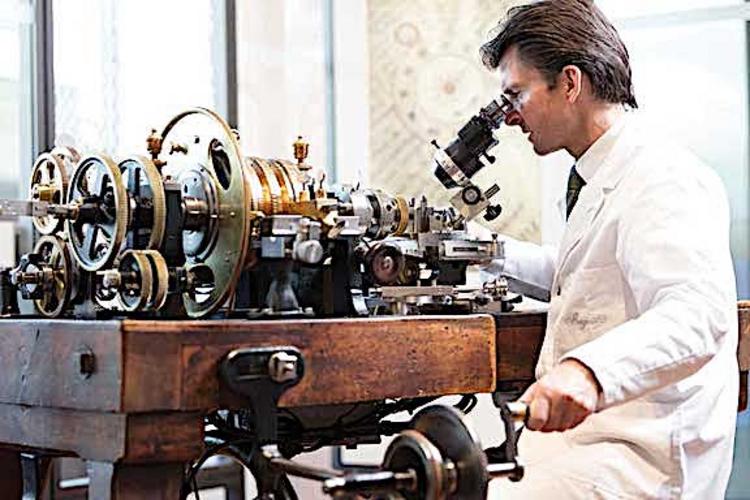 Once the dial plate has been meticulously engine-turned by hand, it is silver coated using techniques developed over two centuries ago: powdered silver is delicately brushed on the plate with circular or linear movements, depending on the type of satin-like finish desired. —(Brequet)

Brequet watches with guilochè dials are signed “Swiss Guilloché Main” to certify that they are the real deal.

Other manufactures who remain true to the craft follow much the same process and have adapted other materials like brass, copper or silver as the base for their dial plates and occasionally then apply various powdered metalic or enamel coatings which are then fired to gain desired coloration and effect. 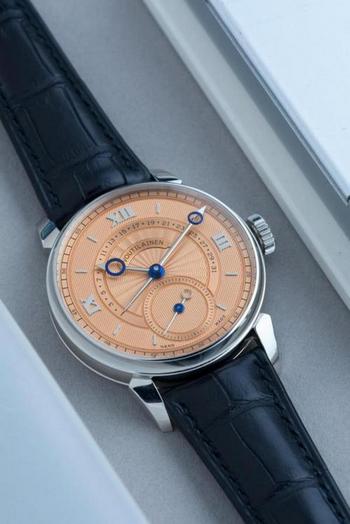 1. Voutilainen Reference 217QRS Retrograde Date features barleycorn, wave and “Clous de Paris” hobnail guilloché-
I believe the dial is copper over silver, enamel over silver, or Rosegold, but couldn't get verification from the home office. Dials of similar coloration are simply listed in the catalog as silver which apparently refers to the base plate without specifying the nature of the top layer. Trade secret, perhaps.

2. Audemars Piguet Petite, Grande & Mega Tapisserie dials, primarily found on models of the Royal Oak. I believe AP uses enamel over silver for the top layer unless specified otherwise.
Photo Credits: The photos are available in the manufacture's catalogs but these were nicely grouped and sized at The Hourglass

Many manufactures that mass produce watches in the highest traditions of watchmaking produce spectacular dials to be sure. However, genuine hand-turned dials, given the arduous and extensive craftsmanship required to make them, simply can't be produced on a mass production scale, not even by Rolex. It has been estimated that Rolex makes 800,000 to 1,000,000 watches annually - before COVID and the constricted available inventory - however, Rolex doesn't release production numbers.

Brequet, by way of contrast, produces 25 to 30,000 watches per year, with an estimated 3 to 4,000 fitted with the prized engine-turned dials by the dedicated staff of 24 master guillocheurs. A-P and Gerrard Perragot are said to make in the neighborhood of 35 to 40,000 watches per year, again a fraction of those with guillochè dials. Mass producers on the other hand likely manufacture the same gross numbers in a single production run of any given model.

Independent watchmaker Roland Murphy (RGM) produces only 250 completely in house watches per year, and only about 40 with sophisticated guillochè dials, while Roger Smith, whose watches sell for in excess of $150,000, has made only 100 watches in the last 20 years.

The real deal is available from RGM starting at around $8,000. Hand turned by Roland Murphy, the dials include a single pattern center, covering roughly 1/3 of the diameter of the dial and a single or double row of a contrasting pattern around the dial that defines the chapter ring. These models don't have in-house movements (Murphy has engineered 4), nor many of the other premium elements of RGM's haute pieces, but they are beautifully done and demonstrate the design and build quality that has put Roland Murphy on the global map of highly respected independent watchmakers. At under $10,000, they are a steal.

Highly prized and scarce, a Brequet watch with a genuine guillochè dial is a master work of art for the wrist.

Great video of a master craftsman at work from Brequet and continues into a video with Roland Murphy from RGM:

Re: Guillochè and Brequet - The original and still the best

Interesting write up that, I remember our own James Elsener used guilloched dials on his Edouard Lauzier watches.

Re: Guillochè and Brequet - The original and still the best

I would give a testicle for any one of those dials. Metal work of most sort is difficult work that requires an incredible grasp of art and science. This level of craftsmanship fascinates me.

RGM really is a steal for what they offer. Maybe one day…
"Courage is knowing it might hurt, and doing it anyway. Stupidity is the same. And that's why life is hard."-Jeremy Goldberg