Charm of the obscure

Charm of the obscure

So, the recent acquisition I've been waiting for has arrived! 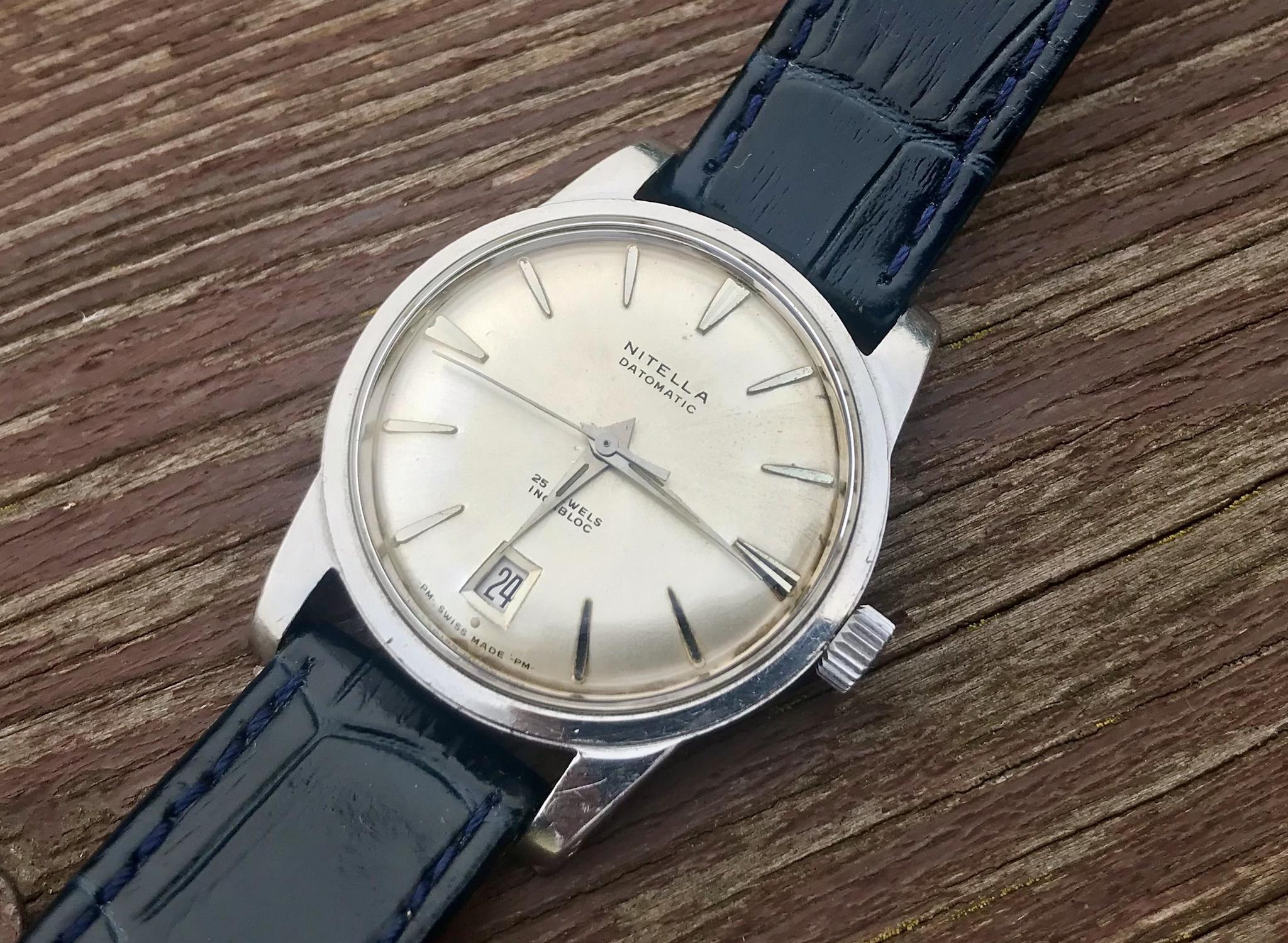 For what it's worth, Nitella was a Swedish market brand of the vast Nicolet holding, based in Tramelan. The intended market of the watch is made clear by the case back marking: 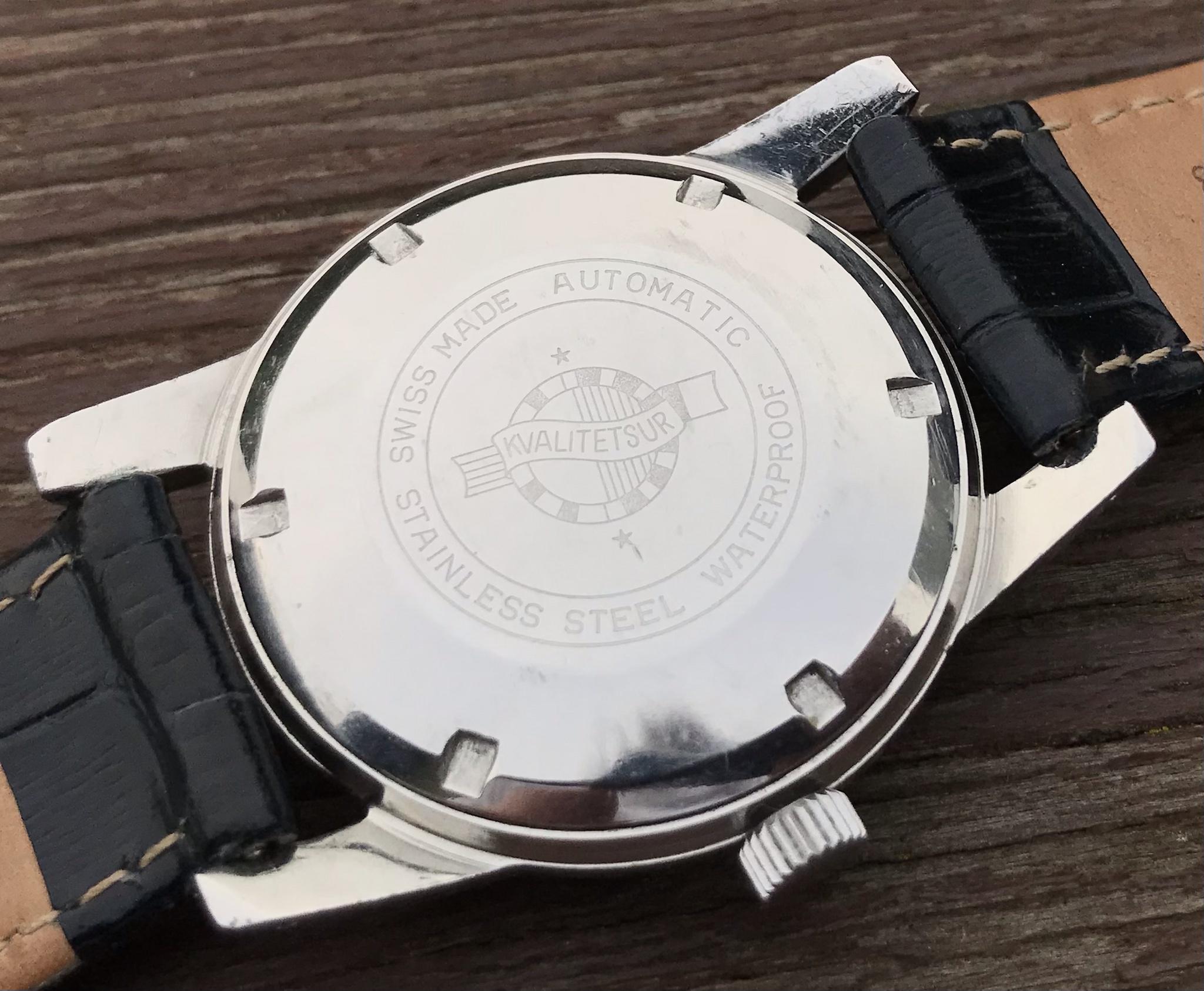 "Kvalitetsur" simply means "quality watch" in Swedish, and in case of this one, I'd say the term is fully justified.
The dial's still in great shape, with all the lume plots intact.

The lume, while long dead, is the star of the show here... If any of you aren't familiar with these markings... 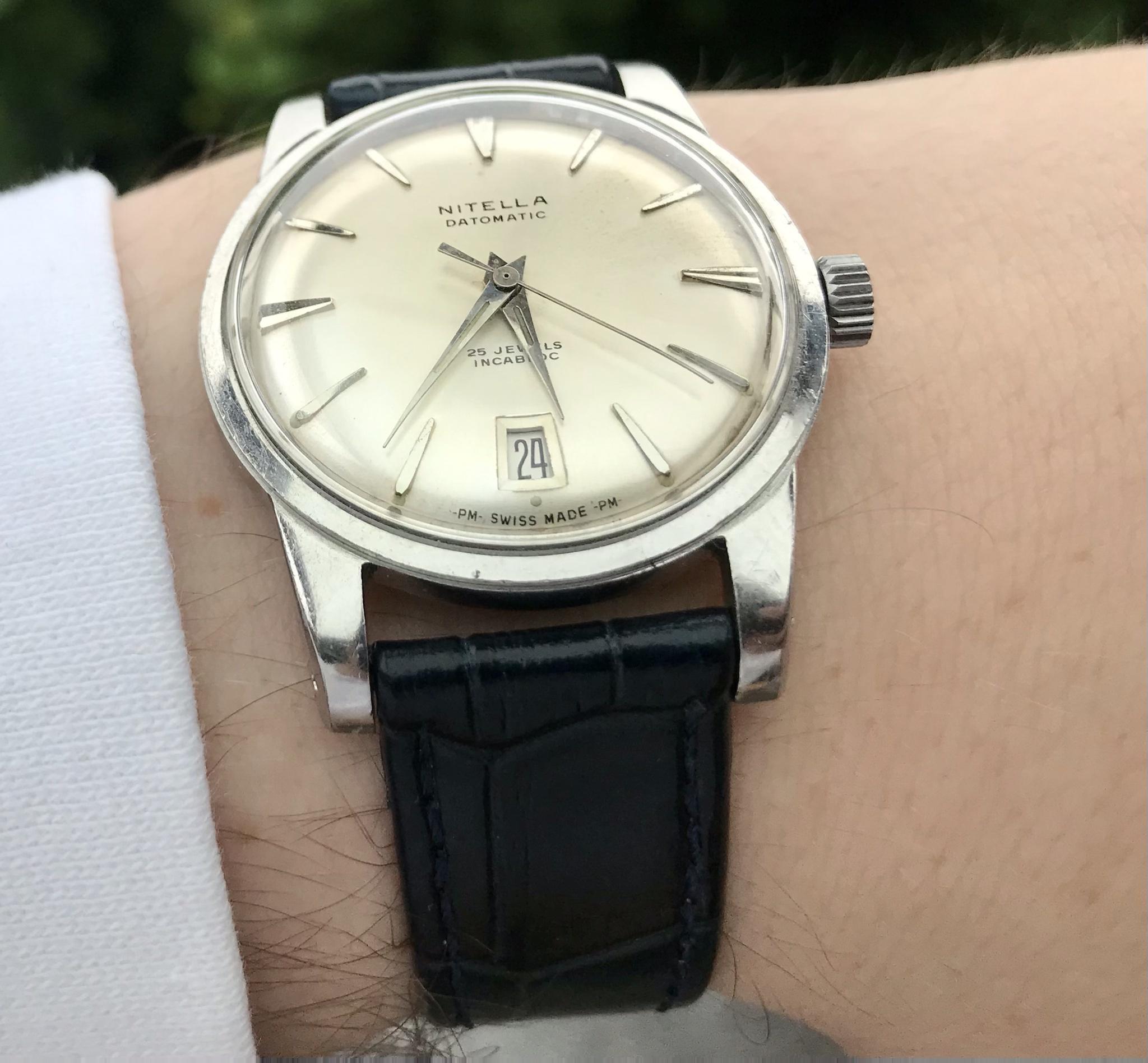 ...allow me to explain. In the late 1950s and early 1960s, manufacturers tried to replace radium with a safer radio-luminescent material. Tritium ultimately gained a foothold in watchmaking, however the first alternative to radium was promethium-147. It had a decent glow, and wasn't nearly as viciously radioactive as radium.
Unfortunately, promethium-147 has a very short half-life. Tritium has one of 12.5 years, or thereabouts. Promethium-147...just 2.5 years. That's right. Just about every single time during a regular service, it'd have to be relumed. I don't know if this was - if it ever was, that was done damn well.
Because the use of promethium-147 in watches was short-lived and unpopular, a nice watch with Pm markings for promethium lume is a cool find.

Even if it wouldn't have that added bit of history, this watch is a cool thing to have. The case measures 35mm, and 44mm from one beefy lug to another. The design with the date placement at 6 o'clock, the dauphine hands, beefy lugs, flat bezel and large crown really reminded me of the "fat lug" Omega Seamasters. Go figure, whoever designed this one, probably knew said Seamasters full well.

Anyway, here comes the second star of the show, the movement. Say hello to the AS (Adolf Schild) cal. 1701: 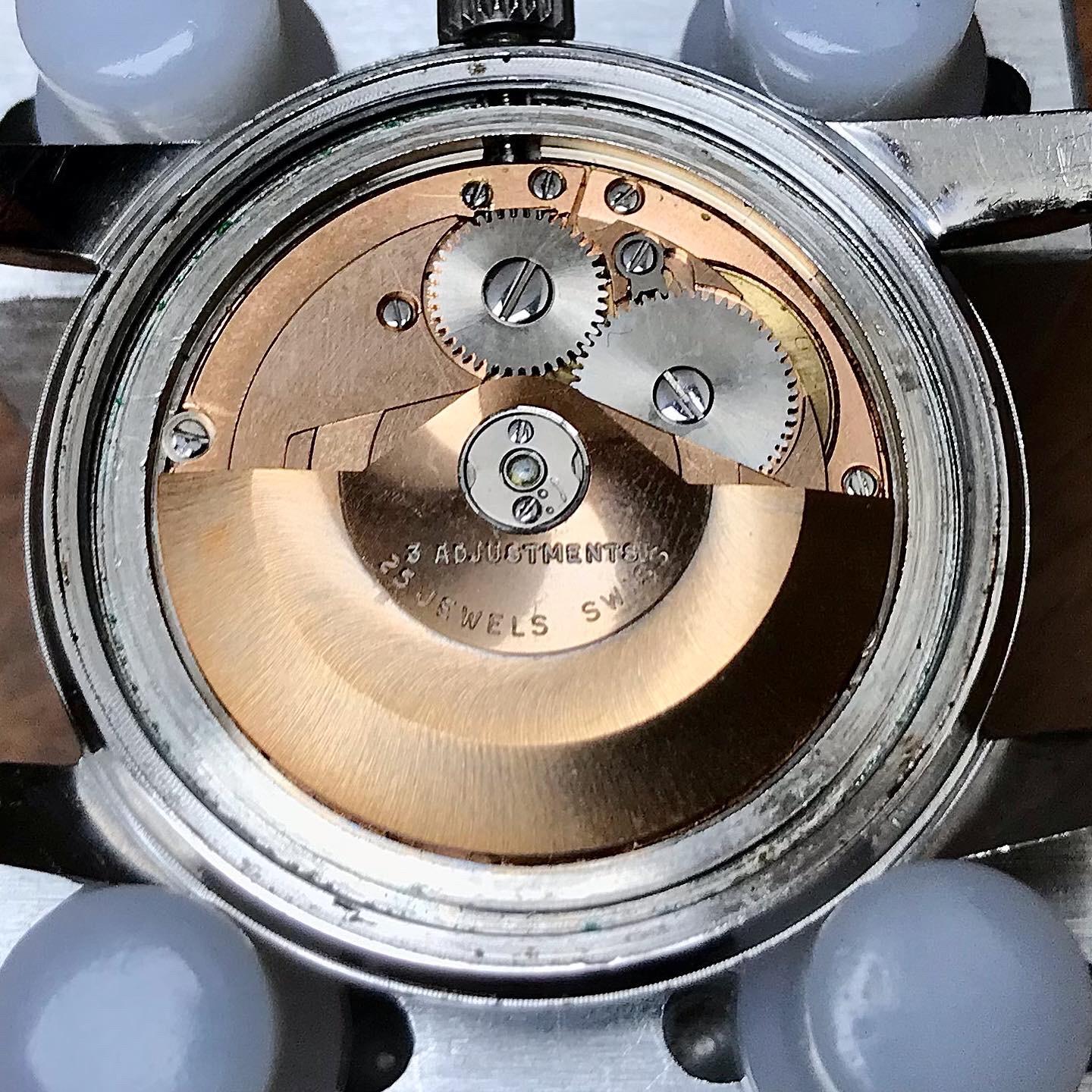 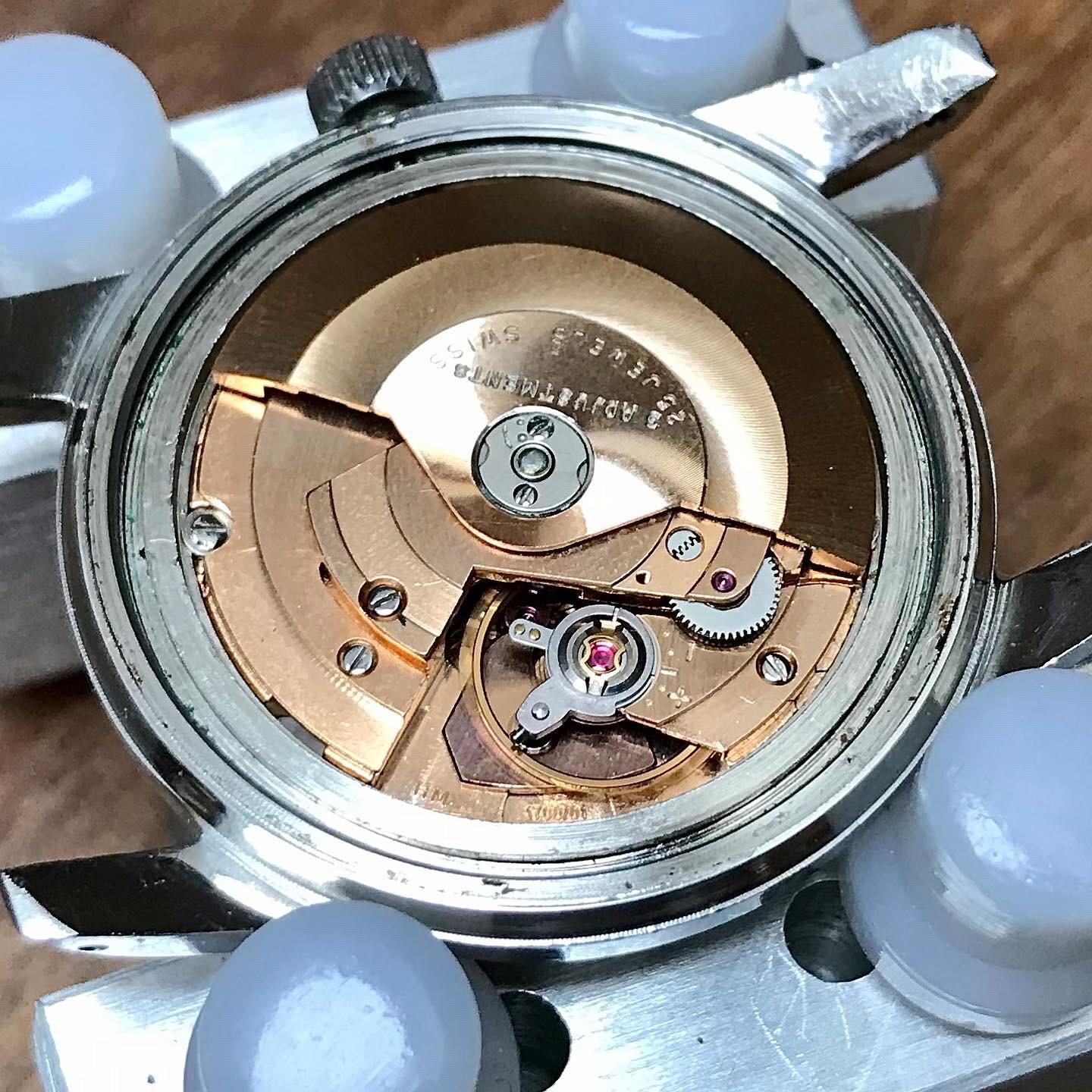 On the contrary to the info in the entry for this movement in the Ranfft archive, the manual wind feature seems to not be detached in this one.
With that finishing and 3 adjustments, this was a more than decent movement back in the day. Not the top 30-jewel version, but 25 is more than sufficient.
No date quickset as such here, but there is a semi-quickset by changing 20:50-24h. In other words, turn the hands to past midnight, until the date switches, turn them back to 20:50, and then past midnight again, repeat the process until the correct date is set.

All in all, I'm really happy with this addition to the collection.

A wrist shot to wrap it up: 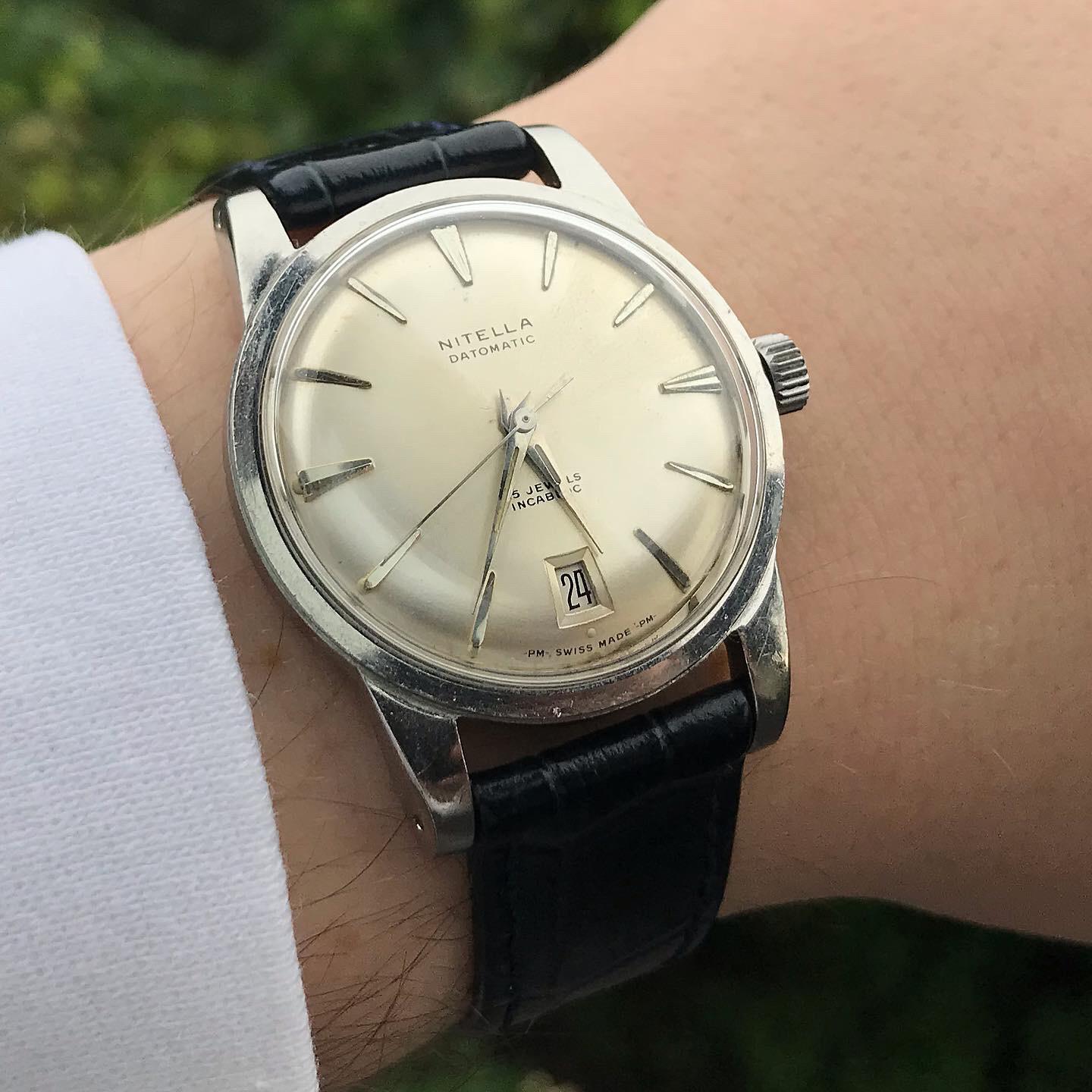 Had to come look at this one on my big screen. WOWSERS!!!

Absolutely a great addition to your impressive vintage collection. Well done, MK.
"Courage is knowing it might hurt, and doing it anyway. Stupidity is the same. And that's why life is hard."-Jeremy Goldberg

A terrific pickup!!..many a Watch God are draining their ale filled gourds in salute to your fine a$$ pickup!!..they all give it 2 spears up!!..
Ebels are a lot like women that lack a low cut dress that zips up the side...neither get the love that they deserve...

Quite simply, a thing of beauty.
Well done Sir! Nice watch. Outside of the smallish case size, the design reminds me of watches Seiko sells a lot of today. Congrats.

Lovely watch and a fantastic write up.


Mark wrote: ↑
Wed Aug 25, 2021 8:49 am
Nice watch. Outside of the smallish case size, the design reminds me of watches Seiko sells a lot of today. Congrats.

35mm wasn’t on the small side when this watch was made. I can generally wear anything that doesn’t exceed a lug to lug of 52mm, in terms of diameter I wear stuff from 28 to 43mm. My sweet spot for vintage stuff is 33-34mm or thereabouts, but that doesn’t take away from wearing anything smaller or way larger.
I’m not sure which Seikos, perhaps the Presage Cocktail Time, although if I was to seek similarities between the design of this one and any watch currently in production, I’d say maybe the Longines Heritage Conquest, with its dauphine hands and fat lugs.
My manner of thinking, so you say, cannot be approved. Do you suppose I care? A poor fool indeed is he who adopts a manner of thinking for others!
Donatien Alphonse François, Marquis de Sade
Post Reply
10 posts • Page 1 of 1