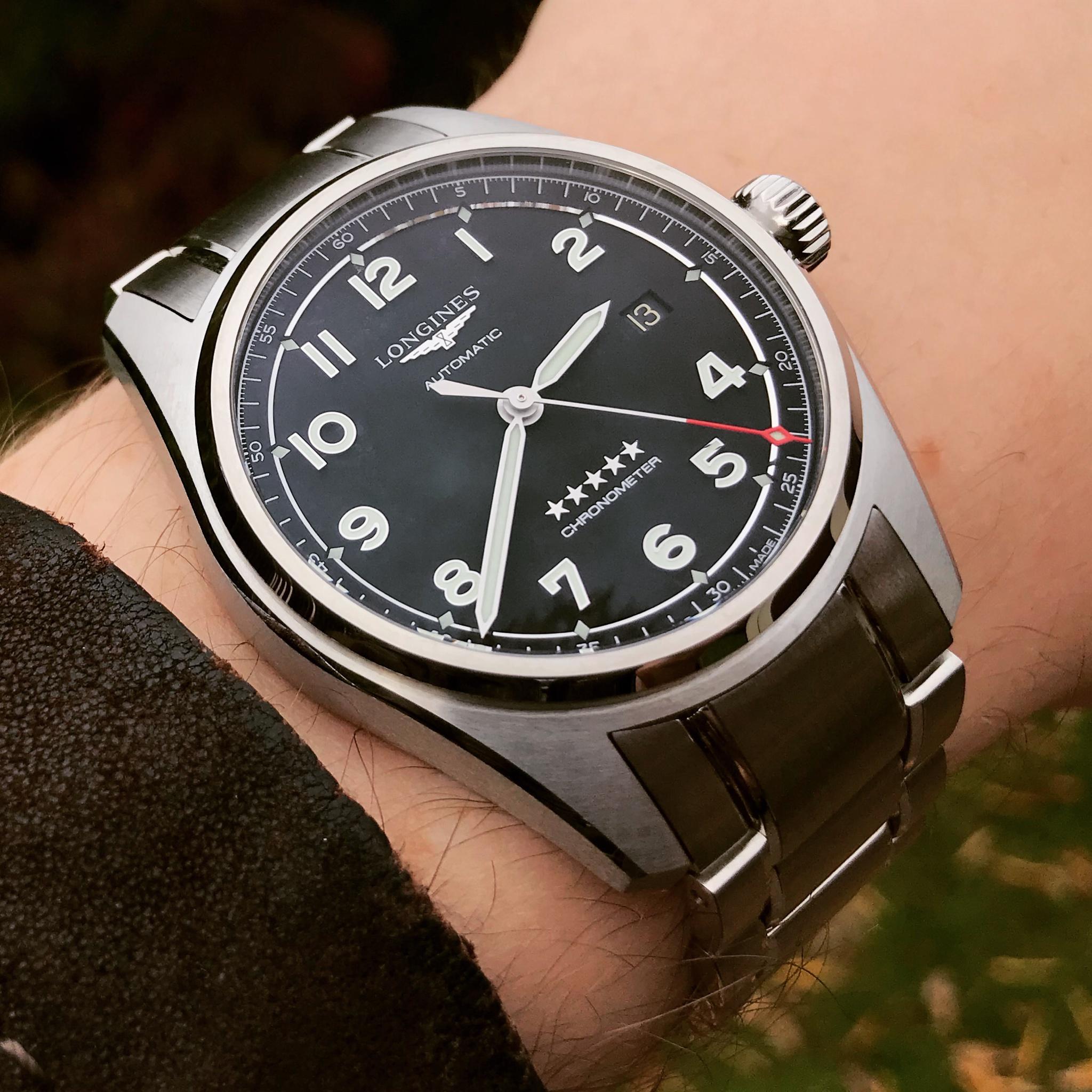 The first impression... I handled a lot of Longines watches at work. This...this is way above any of them. Above any Heritage, HydroConquest, Master Collection. Even above the Record. 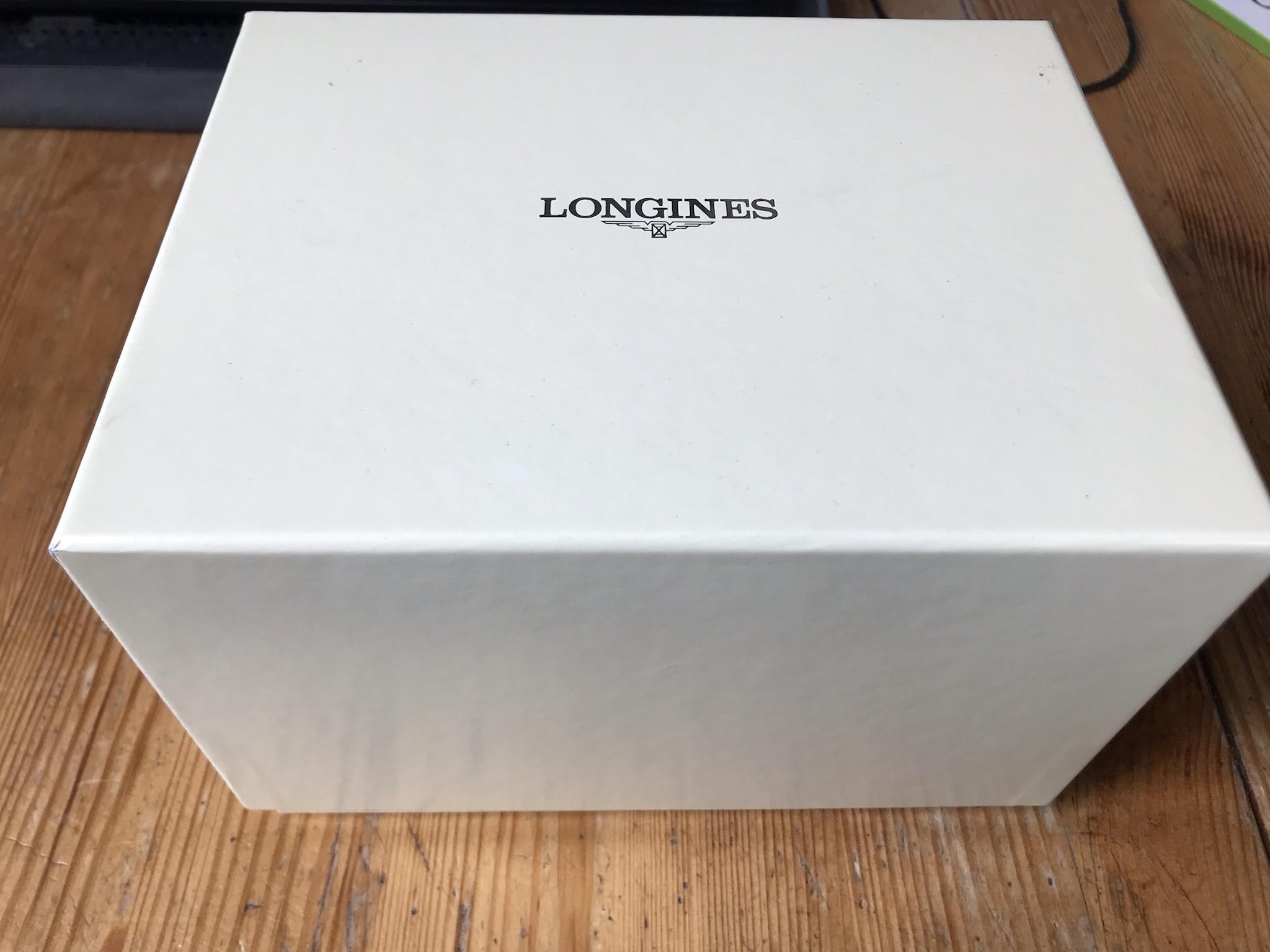 Inside, there's the "type 3" box from Longines, which they dedicate to upper range collections - Record, Master Collection, and indeed the Spirit. 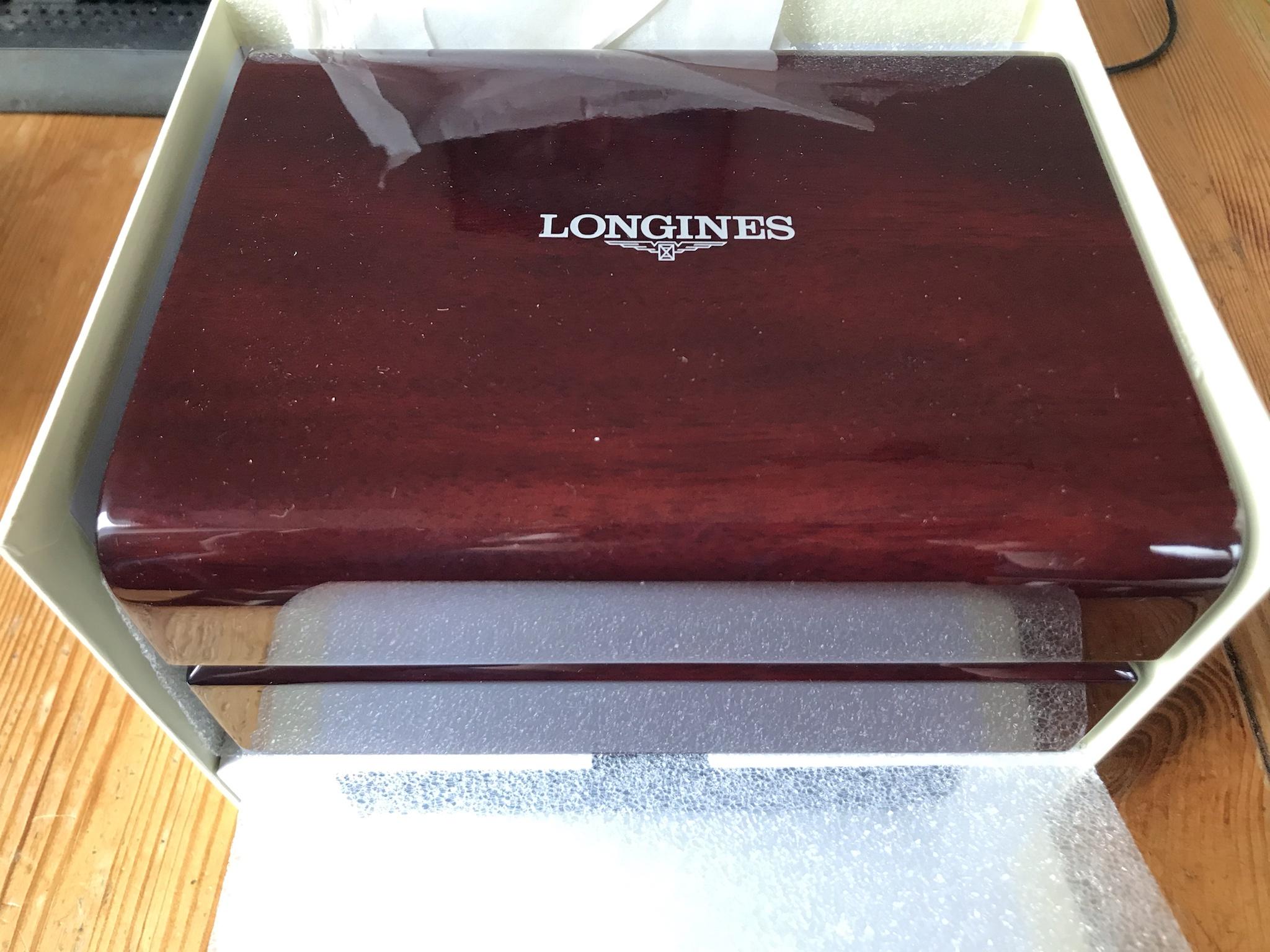 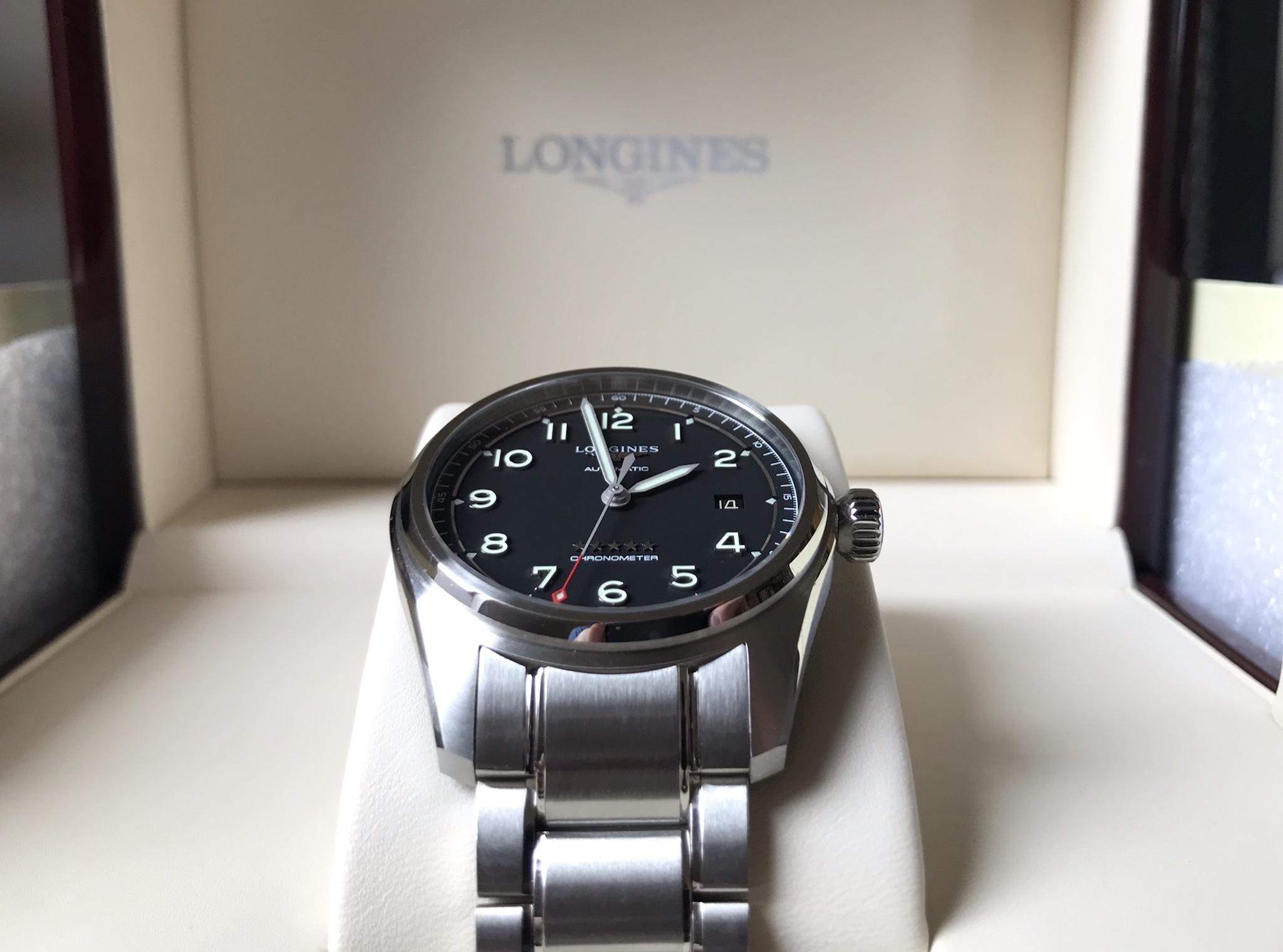 Warranty card (like all non-quartz from Longines, the warranty is for 5 years) and COSC certificate... 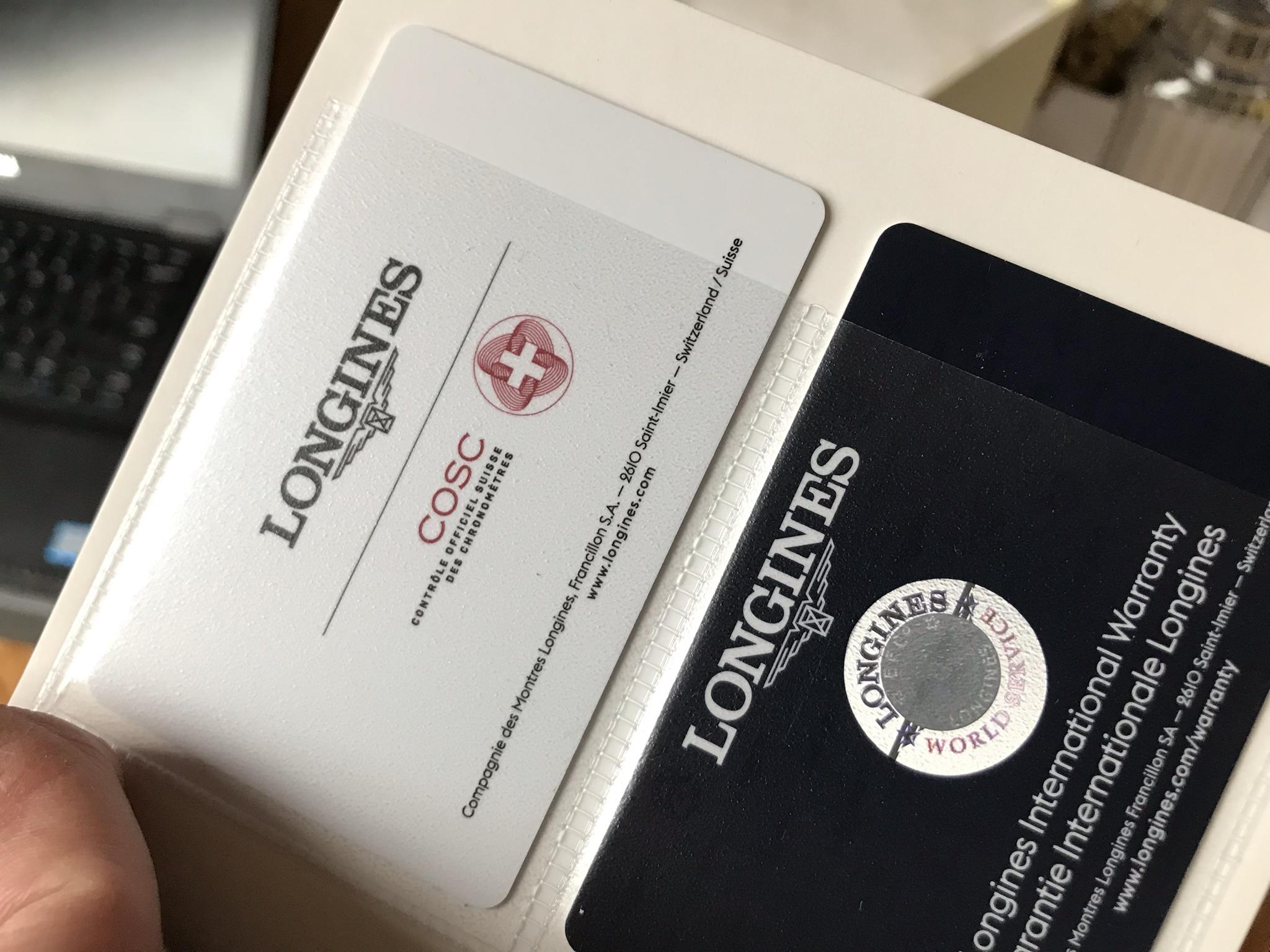 In the current Longines line-up, the only COSC-certified collections are the Record and the Spirit alright. The Record and the Spirit time and date models share the same movement, the L888.4. Obviously, it's an ETA 2892 base, but the L888 is a Longines-only movement. Beats at 25200 A/h, with a minimum power reserve of 64h (Longines claims 72h tops). Like the standard 2892, the L888.4 has 21 jewels, which is less than the next highly modified Swatch Group version of it - the Omega 2500. However, it's more than enough.
Oh, and thanks to the Silicium hairspring, this one is properly anti-magnetic.

In the Spirit, the case back's a closed one - while the L888.4 is a looker, I am glad they went with a tool watch aesthetic in giving this one a closed back: 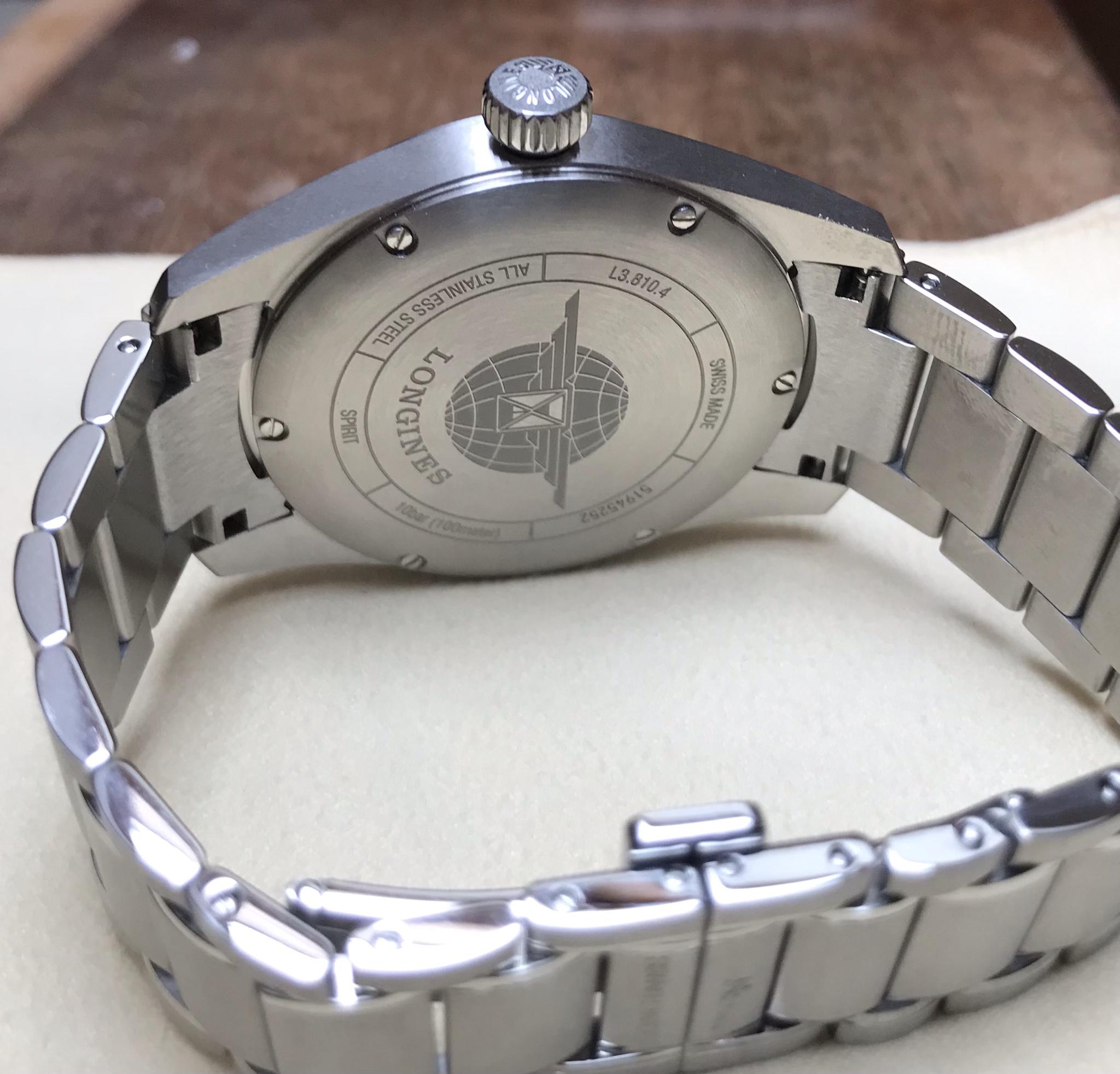 Let's get to the finishing... The crown here is just fuckin' gorgeous. Sandblasted background, makes the polished logo and Longines name stand out. 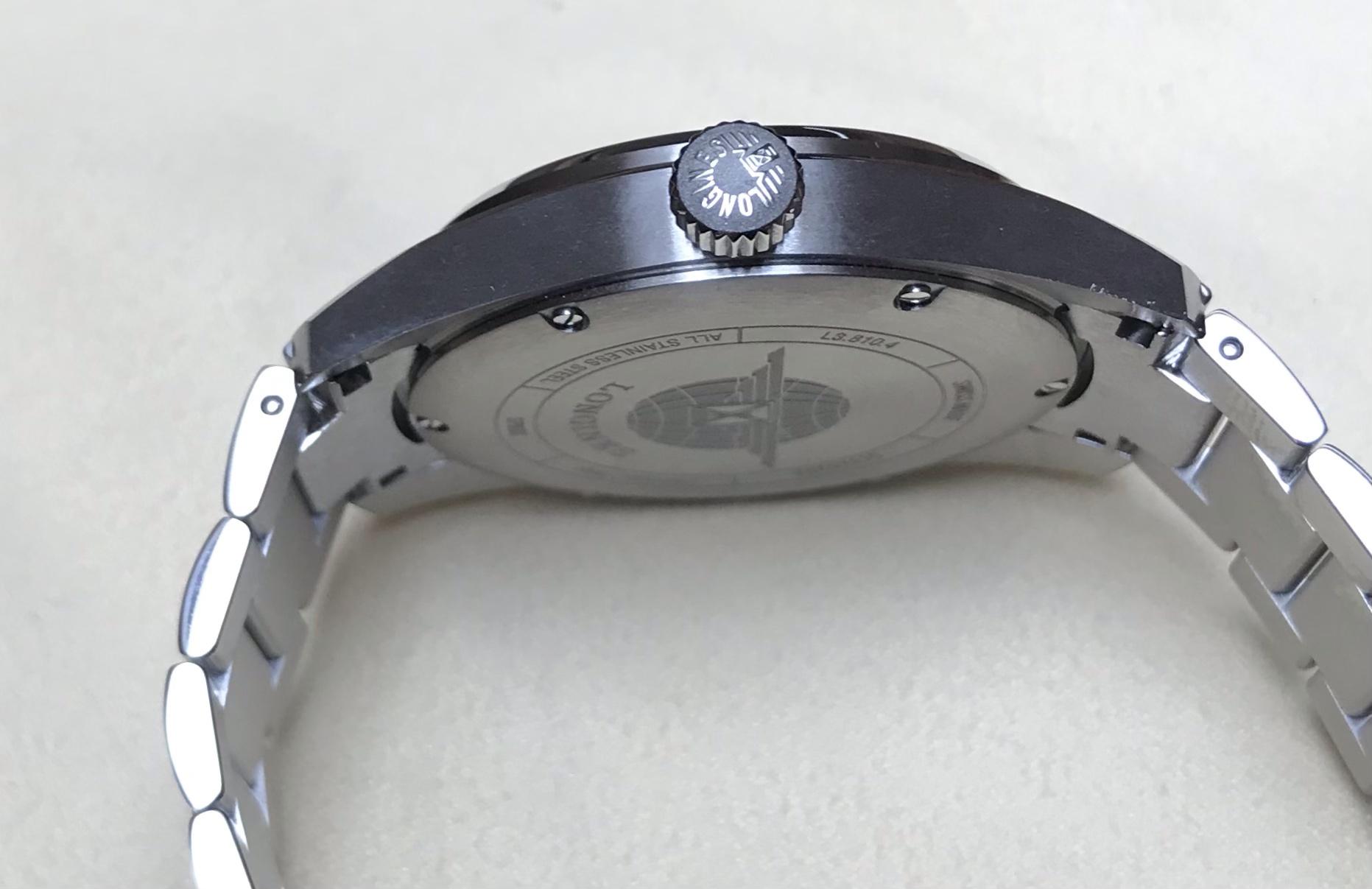 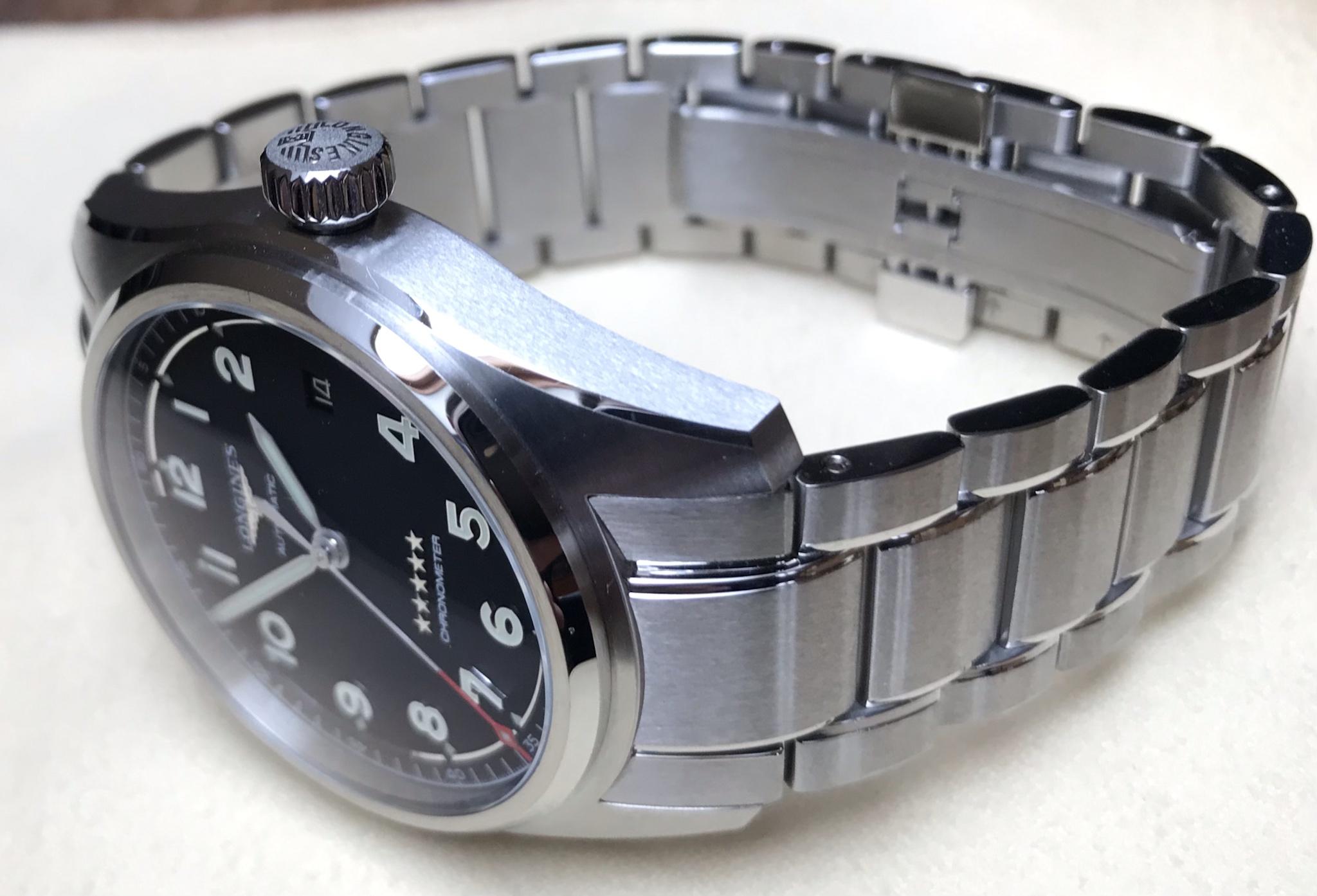 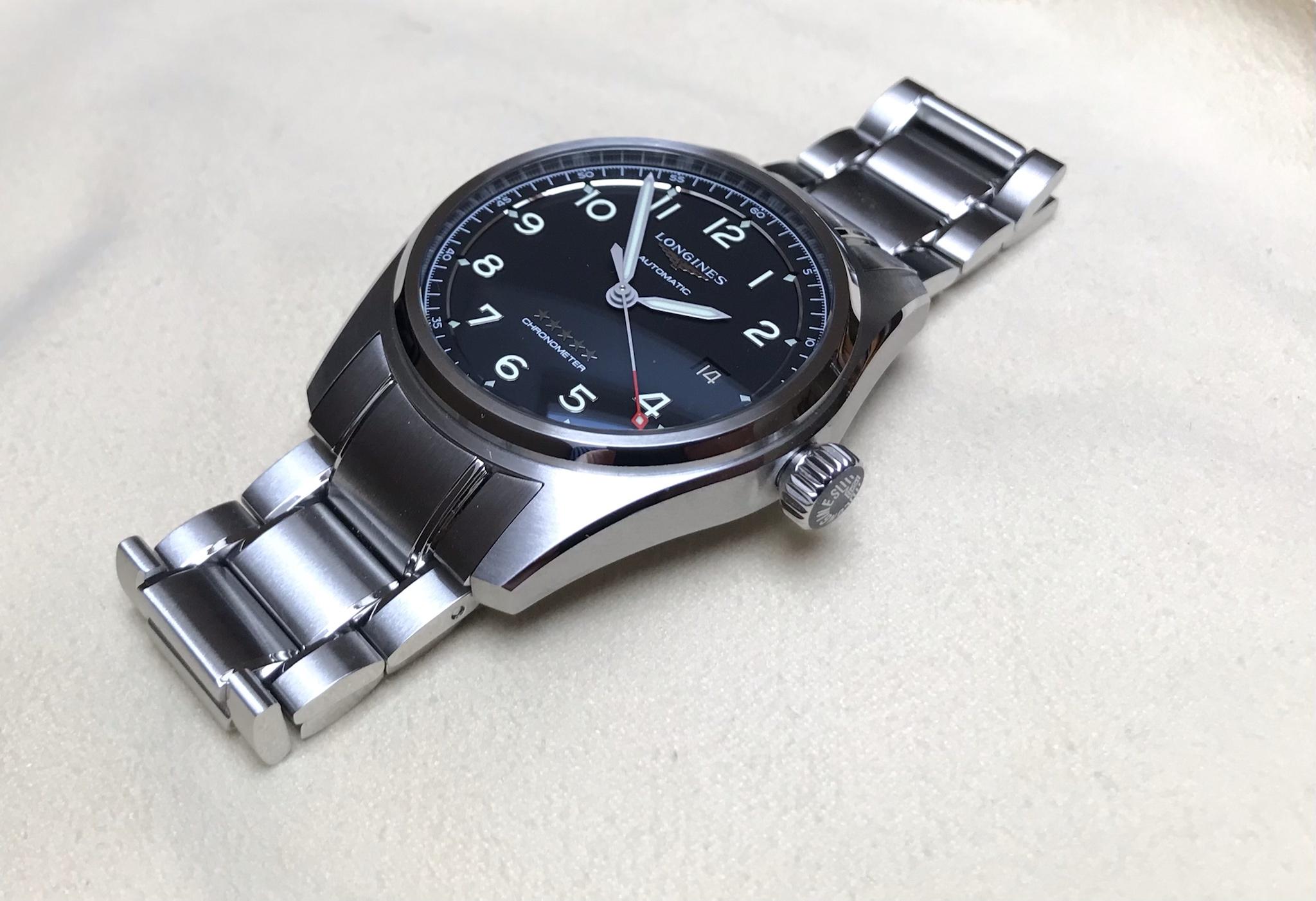 The bracelet looks as if it was a 7-link design. That's also due to the uber-sharp contrast polishing there. It's a 3-link, if you have wondered, held together by cotter pins. A pity that the standard version doesn't feature the fold-over clasp that the bracelet in the Prestige version does. I mean...fuck the quick release system, but I could really use a normal fucking clasp.
Still, as far as butterfly clasps go, this one isn't bad. Doesn't mean it's good, but at least it doesn't open on its own.
Oh, and the endlinks sticking out well beyond the lugs add something like 4-5mm to the L2L, which already is over 49mm here without said endlinks. Because they curve down heavily, they're not an issue to me, they're not giving me any overhang effect.

The dial is a star of the show as much as the case. Absolutely fuckin' stellar. Literally, with the applied 5 stars, a nod to the 1960s-1970s "star rating" on Longines dials. As far as I know, the only 5-star models were from the Admiral collection.
Fuck, I wish I had a better camera. Perhaps you could then see the stepped structure of the dial a wee bit better than here:

With the matte black finishing with applied steel features - the stars, the winged hourglass, the numerals and the edge between the two layers - this dial is just a fuckin' masterpiece.

While I don't like the low scratch resistance of the outer ARC - because this watch has ARC on both sides of the sapphire crystal - I sure like the effect it produces. The sandblasted hands also do a lot for legibility. Seems like a lot of manufacturers are guilty of using that solution these days - including IWC.

Speaking of legibility... Behold, the lume: 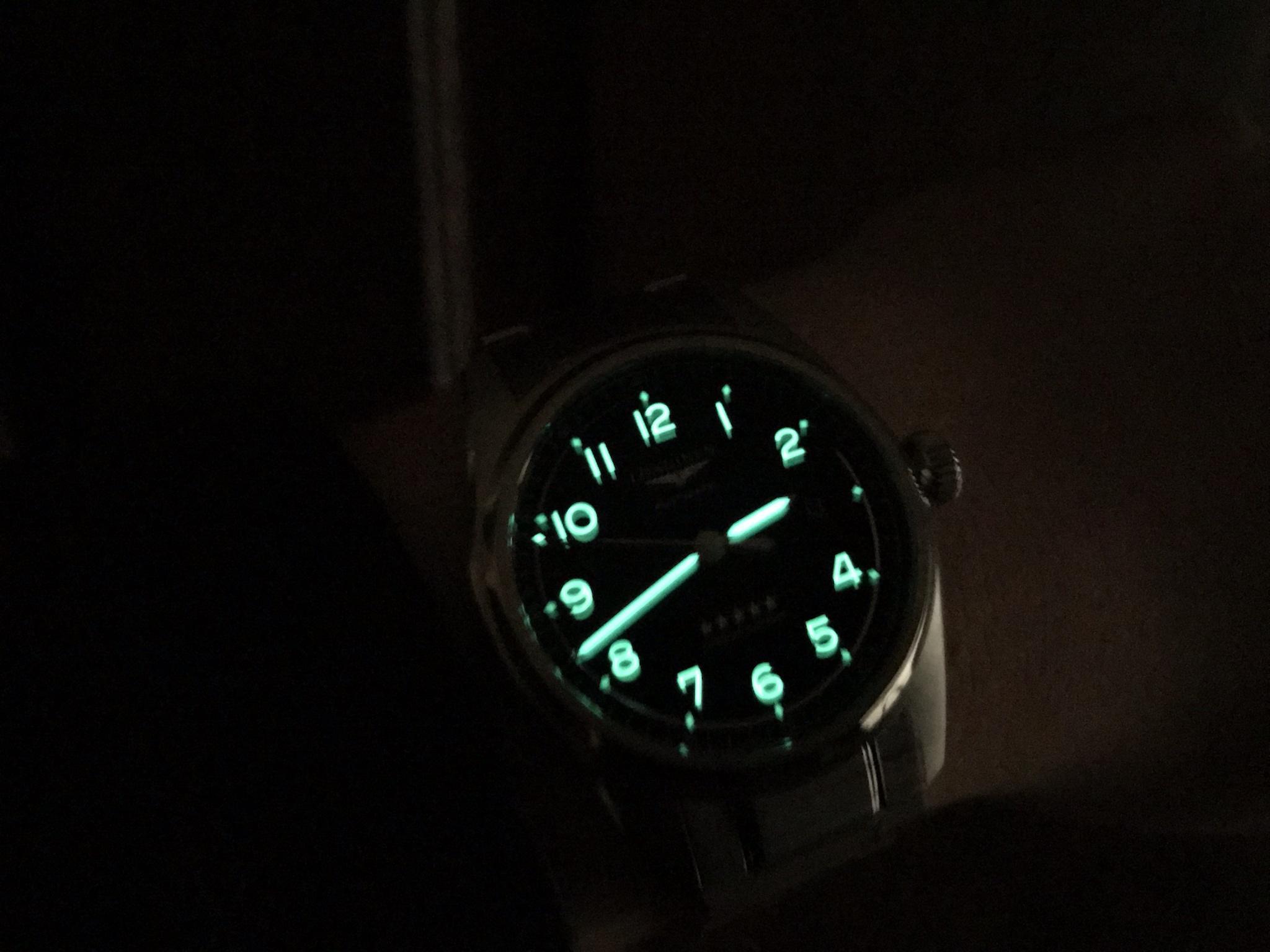 Frankly... I just can't think of any other watch within the same price range that would be this good. Every comparable offering is more than double the price of the Spirit. And just one more shot to wrap it up: 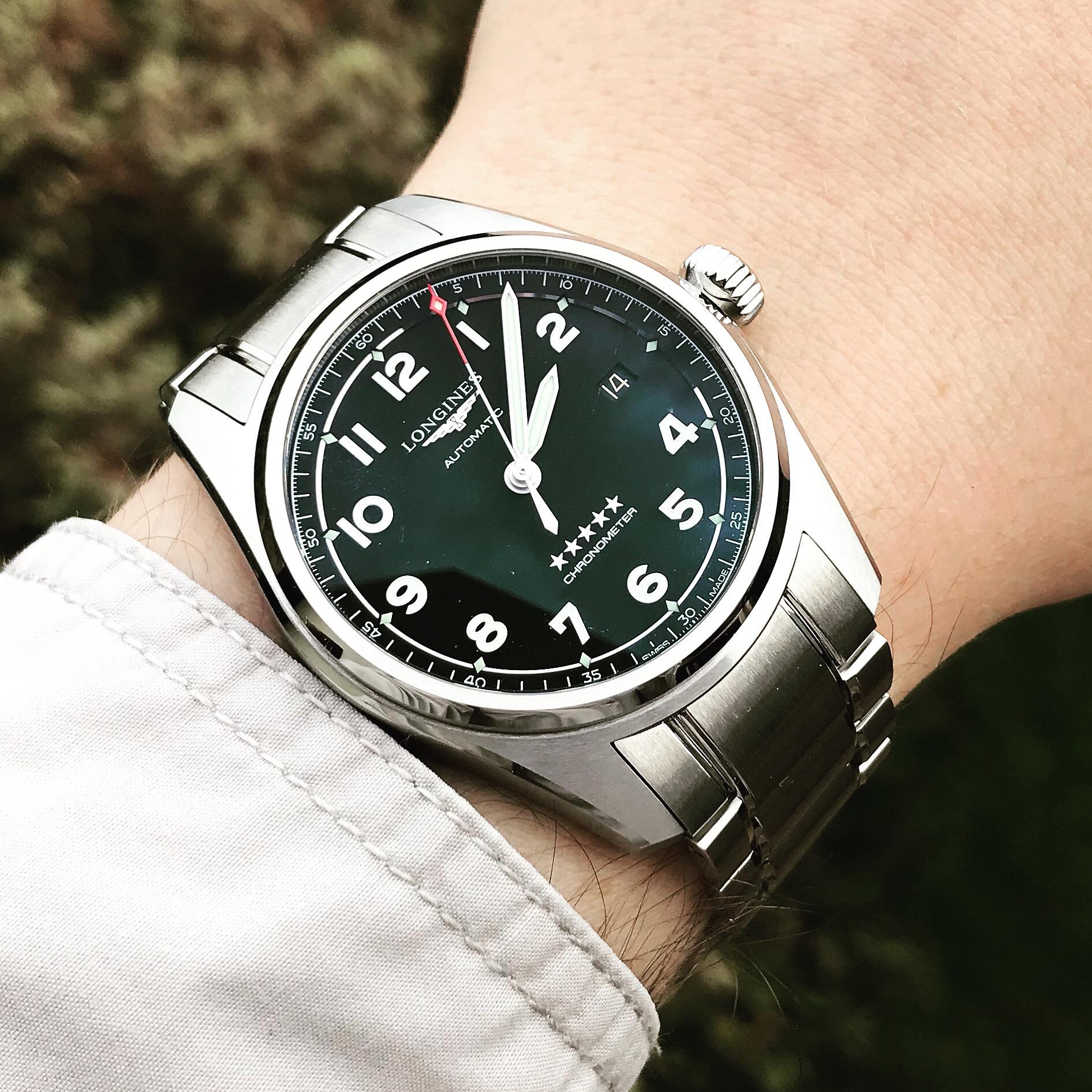 That looks fantastic.... I was waiting for your review. I thought the long lugs might be an issue but it looks great in your wrist shot

Sweet fancy Moses but that is the sexiest watch posted here this year. Nice photos and review. Happy for you.

Should you ever decide to part ways with it, give me first shot, please.
"Courage is knowing it might hurt, and doing it anyway. Stupidity is the same. And that's why life is hard."-Jeremy Goldberg

Very nice, you have great taste in watches.
It's easier to fool people than to convince them that they have been fooled.

Wow!!!..that would look so much nicer on my wrist!!!..
Ebels are a lot like women that lack a low cut dress that zips up the side...neither get the love that they deserve...

I need to get a second job and save up my shekels.

That is sensational, I was in the local Longines store in Glasgow oozing over one of the master collection, almost pulled the trigger too.
I have never seen that on before, is much more expensive than the master range (over here the masters range from £2 to £3K, and that buys a helluva lotta watch too).
Post Reply
7 posts • Page 1 of 1