I put the following on Facebook. I'm happy to have this one...

After my maternal grandfather died, my dad gave me his watch. It's an Acqua, which is/was(?) a Timex subsidiary. It's the kind of watch you'd find on a turn-y watch display stand on a counter at K-mart or ShopKo. That is, it's nothing special and it's a watch one might expect a 90-something man to wear: easy to read and easy to replace.

The crown was broken off and there was another damaged part inside. The crystal was scuffed up. It needed repair and cleaning.

It's the kind of watch one might expect to have seen on the wrist of a guy working in middle management at Wausau Insurance in the middle of the 20th century. It's not flashy, it wasn't expensive, but it's solid and it gets the job done.

I was mildly amused and mildly annoyed that my dad let it sit in his dresser for as long as he did. He said he didn't know who should get it. Fair enough... I am the second-oldest cousin, and if my older cousin Lynn would like it, she and I can talk about that. But as far as I know, I am the only grandchild who cares an iota about watches... though to be fair, I bet David knows the value of a nice G-Shock (redundant).

Anyway, I dropped it off at Caliber Works Watch Repair a few months ago and was 1. pleased to hear it was fixable and 2. happy to hear it would be a few months. Keep your local artisans in business, amirite?

I drove to south Minneapolis after work today and picked it up and I'm pretty stoked. It's very goldy and I'm not a big gold guy, so I have a black lizard skin strap on the way. I'll probably find a brown strap for it, too. (I have brown *and* black wingtips...)

Anyway, here it is. As soon as the plague gets manageable, I hope to have more excuses to wear a nicer watch... looking at you, James Sewell Ballet... Saint Paul Chamber Orchestra, etc. etc.

For now, I'll wear it to work (sometimes) and on pajama days at home.
Cheers! 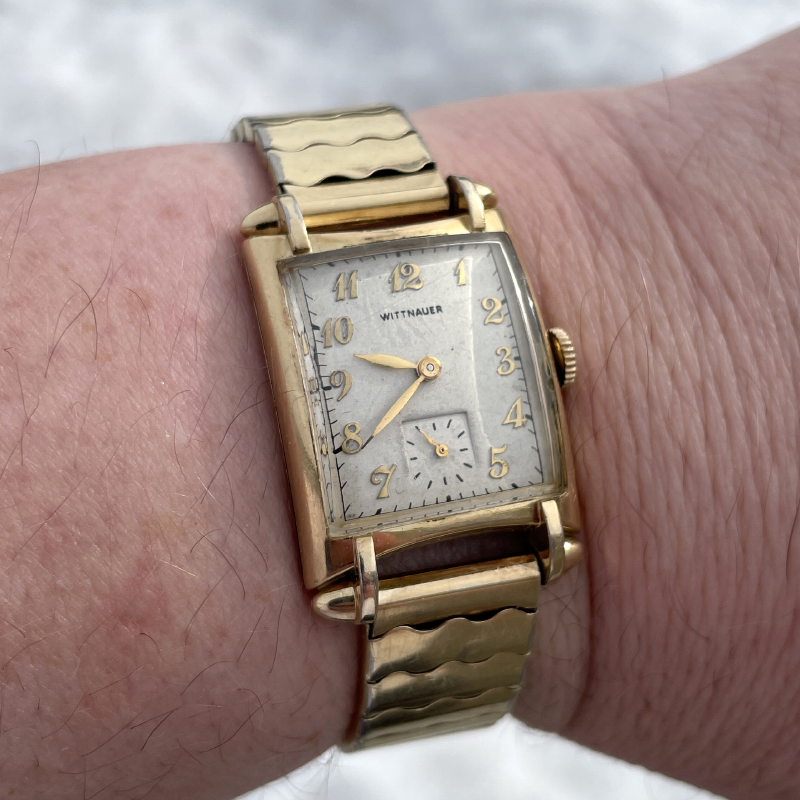 Great story and a greater watch. Man that’s nice and you treated it right.
It's easier to fool people than to convince them that they have been fooled.

Agree... I love that styling

What a great story and the tank is such a classic. Thanks for sharing.

It's fine to hear of a family piece being respected and repaired. It looks fucking good as well!

A fine watch and a better story behind it. Congratulations on the revival.
Post Reply
6 posts • Page 1 of 1