So I'm rummaging around both my usual stuff and the stuff my brother bestowed upon me when I find this one: 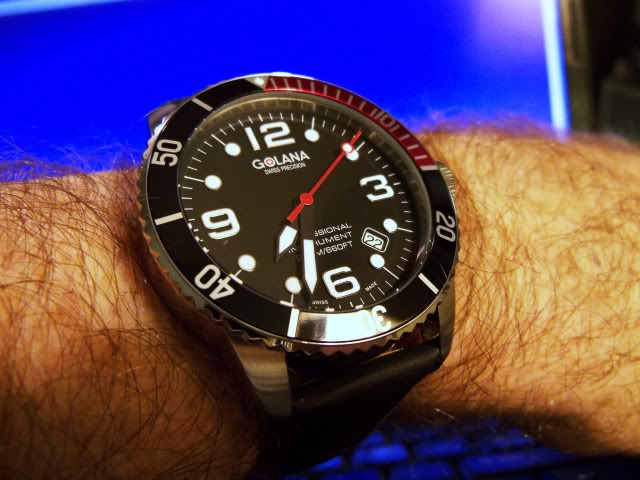 "Golana Swiss" was a brand that was big at Amazon and other areas like it for a while; this is actually the only one I've ever seen out in the wild. I guess it really as a Swiss company for a long spell, but the last I had seen of them, they had taken the word "Swiss" off their newer pieces on their website. Now, the website itself is long gone. I question whether this watch is actually Swiss; even though it says so, there's nothing particularly special about it; it's a quartz diver with a screw-down crown and after changing the battery, I can tell you there's nothing great about the movement, either.

I don't believe this is Swiss; I'm just guessing, but I think Golana did the same Swiss tango that Invicta used to, playing duck and drakes with the old 50 percent thing and slapping these things together, well, wherever. I could be wrong. One clue for me - their website had virtually no information even when it was running, and now even the website appears to be gone.
“Jewelry isn’t really my thing, but I’ve always got my eye on people’s watches.” – Clive Owen

That's a name I had completely forgotten about.
Nothing on the Interbez, except info that's10 years old

My memory may be playing me false, but I think that brand used to be sold on the old ShopAtHome network, I think by the Watch Commander.

It may be the angle but that looks like a big watch.

Not a bad looking watch but have never heard of the brand.
"Courage is knowing it might hurt, and doing it anyway. Stupidity is the same. And that's why life is hard."-Jeremy Goldberg

It's the angle. I think this is a 42mm.
“Jewelry isn’t really my thing, but I’ve always got my eye on people’s watches.” – Clive Owen

That's what I figured. It's pretty cool. Has a Longines Hydro vibe to it.

That's what I figured. It's pretty cool. Has a Longines Hydro vibe to it.

This watch has gotta be more than 12 years old.
“Jewelry isn’t really my thing, but I’ve always got my eye on people’s watches.” – Clive Owen
Post Reply
8 posts • Page 1 of 1