Timepieces from the Land of the Rising Sun, or thereabouts
Post Reply
7 posts • Page 1 of 1

Very sharp looking. Any idea what the dial says?

mrneddles wrote:Very sharp looking. Any idea what the dial says?

Available at a good price with good customer support at WatchUnique in the Netherlands.

Available at a good price with good customer support at WatchUnique in the Netherlands.

Ron...I got a couple questions on the 1963.
As I'm doing some legwork on the watch, I found couple long threads on WUS regarding HK Sea-Gull (also known as Tsinlien Sea-Gull) one of the threads was closed just a week ago...
http://forums.watchuseek.com/f72/seagull-1963-reissue-available-seagull-hk-directly-420653-post3143797.html
Another on the same subjet was opened...
http://forums.watchuseek.com/f72/1963-chinese-air-force-style-watches-thomas-others-821627.html
Now I'm a bit confused and would like to know, without getting into the already discussed at WUS the following.
1-What is Tsinlien Sea-Gull? are they two Seagulls (Tianjin and Tsinlien) as separate entities or are they, the same Co?
2- In the WUS thread, they talked about 3 different versions of the 1963, is the WatchUnique the legit one , or all of them are in some way legit ?
Your inside would be appreciate....
“Nothing behind me, everything ahead of me, as is ever so on the road.” Jack Kerouac

Tsinlien is Sea-Gull HK which was set up as a wholly owned but quite separate subsidiary in 2003 by Tianjin Sea-Gull.

My understanding (I could be wrong) is that Tsinlien S-G is intended *mostly* to be a seller of OEM branded watches, and was set up by Tianjin to fulfill that purpose, thereby leaving Tianjin the opportunity to produce entirely in-house pieces of higher quality directly under the Sea-Gull brand.

As I wrote in this "The Watch Forum" (UK) post:

"the common version 1963 is a child of Tsinlien Sea-Gull of Hong Kong, not Tianjin Sea-Gull Watch Group.

Although the two companies have a close relationship, the common version 1963 was produced as an independent Tsinlien OEM product that kind of "took off" in the market in a few versions depending on order date, ordering company and so on. Don't get me wrong; there is no evidence that Tianjin Sea-Gull was in any way against the production, but it was just not a Tianjin product; it was a Hong Kong product."

WatchUnique has been a fairly long-term distributor of the legitimate Tsinlien product but there have been others.

For example, here are obvious 1963 variants sold by Colamer & Sons in Spain (some not available now, and others still are):

It's plain from many of the watches sold at Colamer's website that they have a very close relationship with Tsinlien.

So, all of the legitimate (except legitimate D304 versions...I'll get to that) 1963 variants come from Tsinlien (not Tianjin) and are sold as whole watches by contract to various suppliers, some of whom market the watch as the 1963 Sea-Gull Air Force re-issue, and some who sell under their own brand (or sell both, like Colamer).

The seller named Thomas used to be an employee of Tsinlien). However, Tsinlien states that Thomas uses lesser quality parts for his pieces. The quality of the parts may or may not be second-rate, but it's probably worth noting that Tsinlien and Thomas are now competitors in the market. In any case, Thomas has enough connections to manufacturers (at least partly due to his past work with Sea-Gull HK) to produce generally well-regarded 1963 variants and other watches, like a few WUS CMW forum watches currently in -- or past -- production.

There is another 1963 variant: a commemorative and fully in-house beauty put out by Tianjin Sea-Gull at a higher cost (about $600), the D304, but it's sold out except for a few remaining in various seller's hands:

And so you can decide which version is the most accurate, here are the only photos of 1963s that I consider verified enough to be reliably called original PLA issued pieces:

and from WUS moderator Gigfy: 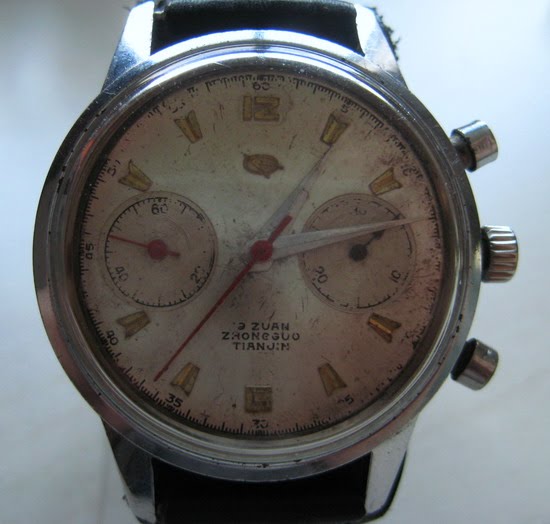 Note the differences in hands, indices and crown in the originals, but it's known there were a few batches with differing cosmetics...

Thank you Ron...
I find out (my OP pic comes from there) about the 1963 in the Relojes Especiales forum, an spaniard site I'm belong to for many years , indeed the guys there all recommend Colomer as both a great place to buy the 1963 and the legit model (but think WatchUnique pricing is better)...
Interesting read, greatly appreciated!
“Nothing behind me, everything ahead of me, as is ever so on the road.” Jack Kerouac
Post Reply
7 posts • Page 1 of 1