On some of their incessant Invicta shows, Evine has been showing a Grand Diver with a meteorite dial 47 mm for around $300. During the presentation they said the metorite came from Sweden or Norway? I once owned an Invicta Ocean Ghost Meteorite IN0470. Paid $288 back in 2011 and sold it a few years later for $367. The meterorite was supposed to have come from Africa somewhere. I also remember some critisim about the thickness of the meteroite dial, but don't know what the thickness of any other dial material is.

Anybody have any thoughts on these meterorite dials.

George I know you can but meteorite from all over the planet. Now the content of the meteorite is never going to be the same. Some have high iron content others are very beautiful. I’m not sure of Invictas are treated or not due to the fact I have seen older ones with moisture rust. All I can say is do as much homework as you can and be comfortable with what you’re buying.

I have bought only a couple of meteorite-dialed watches, and as luck would have it, both are from Invicta: 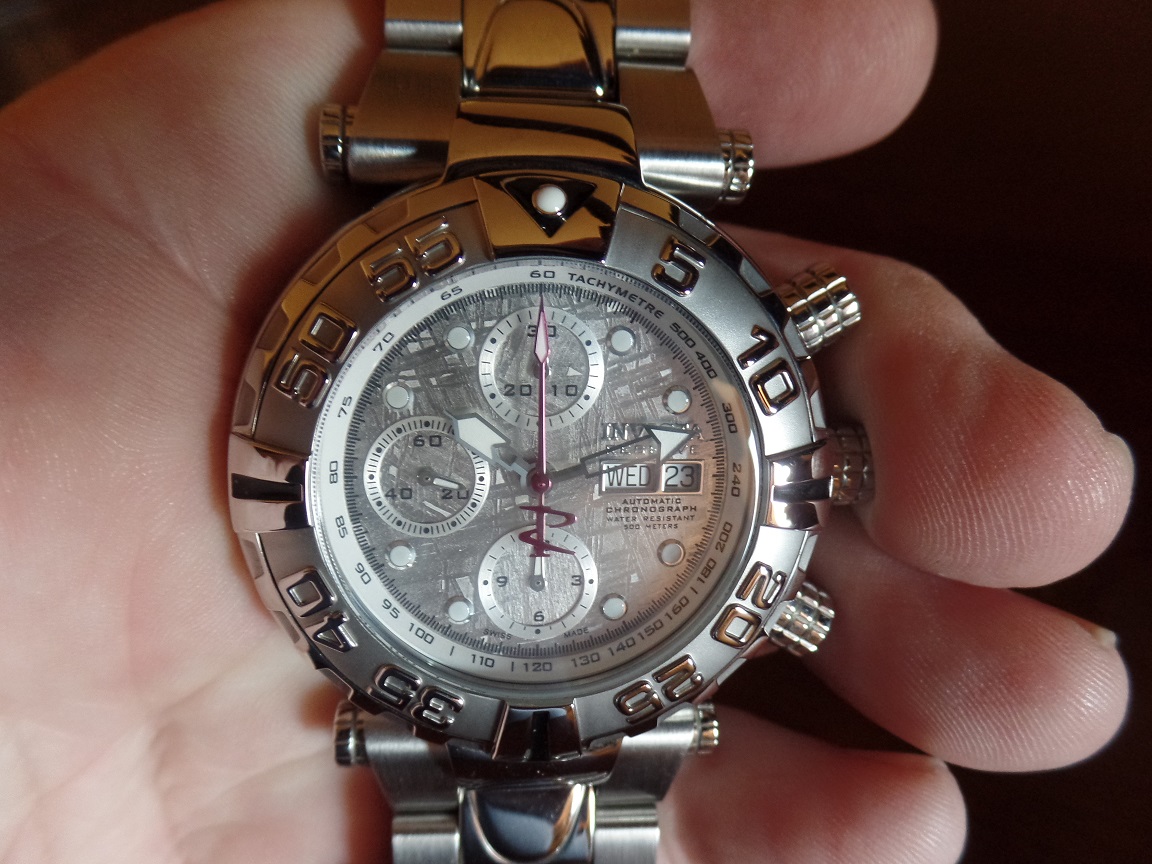 As to the genuineness of the meteorite, I know that, at some time in Watchlord's not-too-distant past, a member donated one of his Invicta meteorite-dialed watches to koimaster, who sent it off for analysis. Tests from this independent lab showed that the material was in fact meteorite, though they had no way of telling if it was Gibeon meteorite or from somewhere else. (The watch was eventually returned to the WL member who'd donated it; the section tested was small enough that the watch was still wearable.)

Gibeon meteorite supposedly has the least amount of iron oxide in its makeup, thus making it least likely to rust, and thereby making it worth far more than other, more ferrous meteorite blends. The fact that the country of origin for the Gibeon Meteor, Namibia, places strict limits on how much of it can be exported makes it still more rare and expensive to obtain, a situation that will remain in place for the foreseeable future.

One last thing: Although Jim Skelton often claimed that these earlier watch dials were made of Gibeon meteorite, the case back's stated only the one word, "meteorite." (See below...)

Have always been weary of anything sold as "meteorite." Just too easy to fake.
"Courage is knowing it might hurt, and doing it anyway. Stupidity is the same. And that's why life is hard."-Jeremy Goldberg

Thanks to all for the info on meteorite dials! I decided to pull the trigger and grab the Invicta 47mm Grand Diver with the meteorite dial from Evine for $295 plus $12 S&H and they now stick me with the MA state sales tax of 6.25%. I was watching the various presentations and Hostess Heather Hall used the term Gibeon meteorite (from Africa). Another host stated their meteorite came from Northern Scandinavia (Muonionalusta ?). Another said Invicta gets it from several locations. In any case they used the term genuine meteorite and just listed the dial in the description as Meteorite.

"The authenticity is easy to check because there is no process on earth that can produce the Widmanstätten pattern. There are some watches with fake etched patterns , but they are quite easy to identify (Edit2: to avoid confusion, the real meteorite patterns are brought out by an etching process, too, but they reflect the light in different angles, which can't be achieved in the same way by etching a normal piece of iron). If the dial looks like this, it's authentic."

I didn't include the photo of the dial, but it looks similar to my former Ocean Ghost.
GeorgeH
"Buy what you like and can afford"
Post Reply
5 posts • Page 1 of 1