Not bashing at all. History for some of us from the old days. Glad to see the place up and running again.

The following is a "copy/paste" job from a thread I started on another forum regarding Invicta and the supposed Swiss origins of their current time pieces.

The "Cliff Notes" version of the thread are as follows:
1. I respectfully ask the question: Where in Switzerland is Invicta manufactured?
2. I get no definitive response at first, then I get some questioning of my reasons and I state them in a respectful manner.
3. I get an answer in the form of a previous thread from another member.
4. I research the answer and came up with the conclusion you will see below.
5. Everyone was respectful and cordial throughout the thread. I did sense some push-back. But, I can understand it since my question may interfere with the best interest of others, or the efforts of others. Or, may be seen as "throlling". So, that's OK. No offense taken.

Conclusion I came up with is that Invicta does not have Swiss factories and jobs out all of their watches to Chinese watch companies to make.

Very nice to see you here!

Most came from Hong Kong assembly of parts sourced from the mainland as well as Japan and some Swiss movements. A fair number from Thailand and Malaysia and, difficult as it was for me to accept, some few - very few - from Swiss manufacturers - I believe Sellita and Armond Nicolet.

The actual facility was in the Kowloon district of Hong Kong which I believe is now operating under a different name (formerly Heromex).

And other interested parties have finally gotten around to researching the matter then putting the results into, I believe, four languages and distributed to 40 countries: 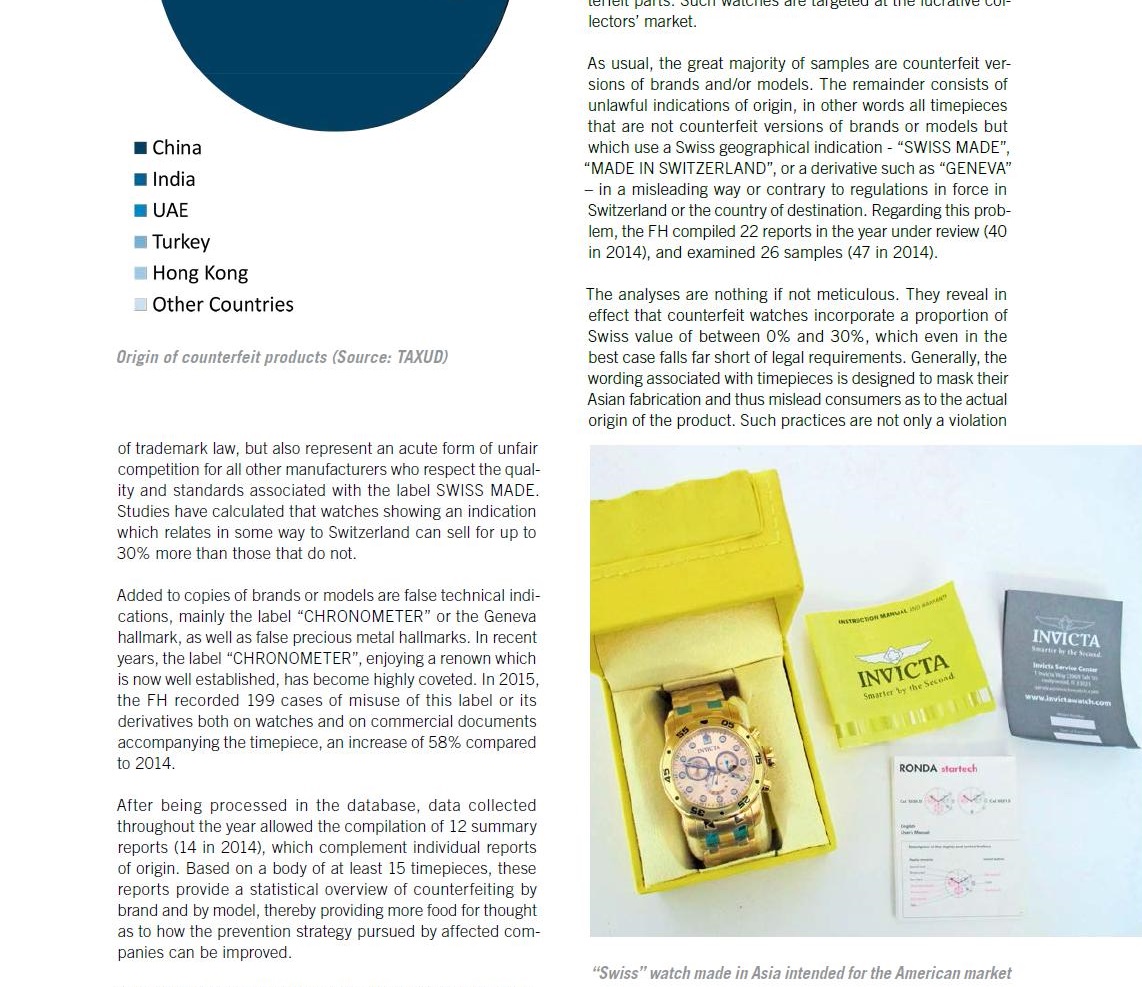 Been a long time since they've had the balls to suggest a Swiss factory. And, being under a microscope so to speak, they're even forthcoming when they hire Sellita to slap one together that actually complies with the regs.

And glad to see you - it's been a long time.

Nous:
"Conclusion I came up with is that Invicta does not have Swiss factories and jobs out all of their watches to Chinese watch companies to make."

I went to the Evine website and under the watch category I entered "Invicta Swiss Made" and got 33 results. I did not go through all 33 quartz watches, but checked a few as EVINE under details lists the Movement Country of Origin as well as Watch Country of Origin. If what you say is true EVINE needs to be looked into for false advertising. Many of the listings indicated Switzerland as both Movement and Watch origin. Some were listed as Swiss Quartz and the Country of Origin was listed as China in the details. At least one listed the Country of Origin as Hong Kong. I also did a search for Invicta Swiss Automatic and there were 19 listings. Again, I didn't go through every one but many were Swiss movement but China watch origin. At least one was Japan movement with Malaysia Origin. It is interesting to note the Seikos have Japan movements and watch origin China.

I am not a fan of most of the Invicta offerings as they are too large and uncomfortable. I have owned over 70 Invicta and only had a few problems. I currenlty have 3 Grand Divers and a Pro Diver IN 24760 which has a Japan movement and was assembled in Maylasia. So overall I feel some Invictas are a good value if you get them at a good price. I'm more inclined to judge the watch after I wear it for a while. I don't worry too much about what Eyal's Grandmother did with the Russian Divers.
GeorgeH
"Buy what you like and can afford"

Interestingly, this subject was at Lords as well

Apart from the gags, I rarely give Invicter much thought anymore.

Everyone will draw their own conclusion.
GeorgeH
"Buy what you like and can afford"

If Eyal had any Swiss factories (that make Invictas)
the name on the building would be visible from space. He bought one with Glycine but that's another story.

Everyone will draw their own conclusion.

Maybe I'm being a bit dense, but what is this supposed to show?

I am of the firm opinion that facts about Invicta Watch Group should be not only discussed, but displayed as an education for both newbies and unaware watch buyers. I give them no quarter - IMHO, Invicta has been a blight on the watch hobby for at least 12 years, and people - watch buyers, consumers - should know their questionable history and business tactics.

Some people at this point, particularly at Watchlords, believe that keeping tabs on Invicta is so 2011 - but given the nonsense this company has either pulled or tried to pull, let the sun shine brightly on their mendacity. I've always considered it a public service.

Those who buy Invicta knowing what they're getting? I have no problem with it, or them - yeah, they issue a decent beater now and again. Those who dress from head to toe in yellow with self-made T-shirts saying "Invicta Man," calling Evine to talk to the "celebrities," spending thousands of dollars to go on cruises with 500 home shopping network watchers, and calling those who point out flaws in products "haters"? These people need to have their freakin' heads examined, and I will still continue to point and laugh openly at such complete, incomprehensible stupidity.
“Jewelry isn’t really my thing, but I’ve always got my eye on people’s watches.” – Clive Owen

If it wasn't for Invicta, I wouldn't have gotten involved with this hobby as much as I did. That said, there's no denying the direction the company took and the negative impact that had on many in the hobby. The disenchantment I felt after learning of the deception and outright lies made it easy to distance myself from the company and the shopping network for helping promote that deceit. Not so one brother-in-law with some 70 of those monstrosities. We no longer talk watches. He's firmly in the Invicta world, but he doesn't buy anymore since most of his are quartz and battery replacement has become a major problem. LOL
I only have one left in rotation, my 9937. This one has sentimental value and I have no problem wearing it. I just don't advertise to any one else that it's an Invicta.
I used to post occasionally on the old board. This is my first post on the new.
edison

I thought this was a realistic assessment of the Invicta Brand.
I have flipped over 70 Invictas over the years and have had few problems. I currently have 4 Invictas in my collection, 3 are Grand Divers.
I feel they are a good watch for the money. I don't care about Eyal's grandmother. If a company puts Swiss Made on the dial and it has a made in China movement, now that's a big problem.
You do not have the required permissions to view the files attached to this post.
GeorgeH
"Buy what you like and can afford"

Everyone will draw their own conclusion.

Maybe I'm being a bit dense, but what is this supposed to show?

I think I'm also a bit dense as I just put together a bunch of numbers from eBay and was hoping everybody would draw their own conclusion. What it shows is how many items of a random selection of watch brands were listed on eBay. I would venture a guess that the more listings on ebay the more popular the brand?
A few more brands:

GeorgeH wrote: What it shows is how many items of a random selection of watch brands were listed on eBay. I would venture a guess that the more listings on ebay the more popular the brand?

Perhaps..in Invicta's case, it might be more sales listings that is contributing to that number since I think they're hard to sell on the forums...I may be wrong

Unfortunately, most newbies get sucked in before they learn the truth about the company. For many it's denial and defense when they learn they've been taken, especially after spending goo gobs of money for these heirloom pieces. I was on another forum where the "is Invicta that bad question" came up so often it became tiresome. I don't frequent that forums that much anymore, but those active there dish out a dose of reality when required.
Post Reply
17 posts • Page 1 of 1