I will soon be downsizing my collection, and wondered if fellow WIS here would be interested in any.
Because shipping from the EU to the US is somewhat expensive, I'll be selling the watches in bulks of two or three. Yeah, I know, not necessarily the best way, but then again, I won't charge full shipping - 75% will do. Shipping via DHL or UPS. So...here are the watches that'll be going... 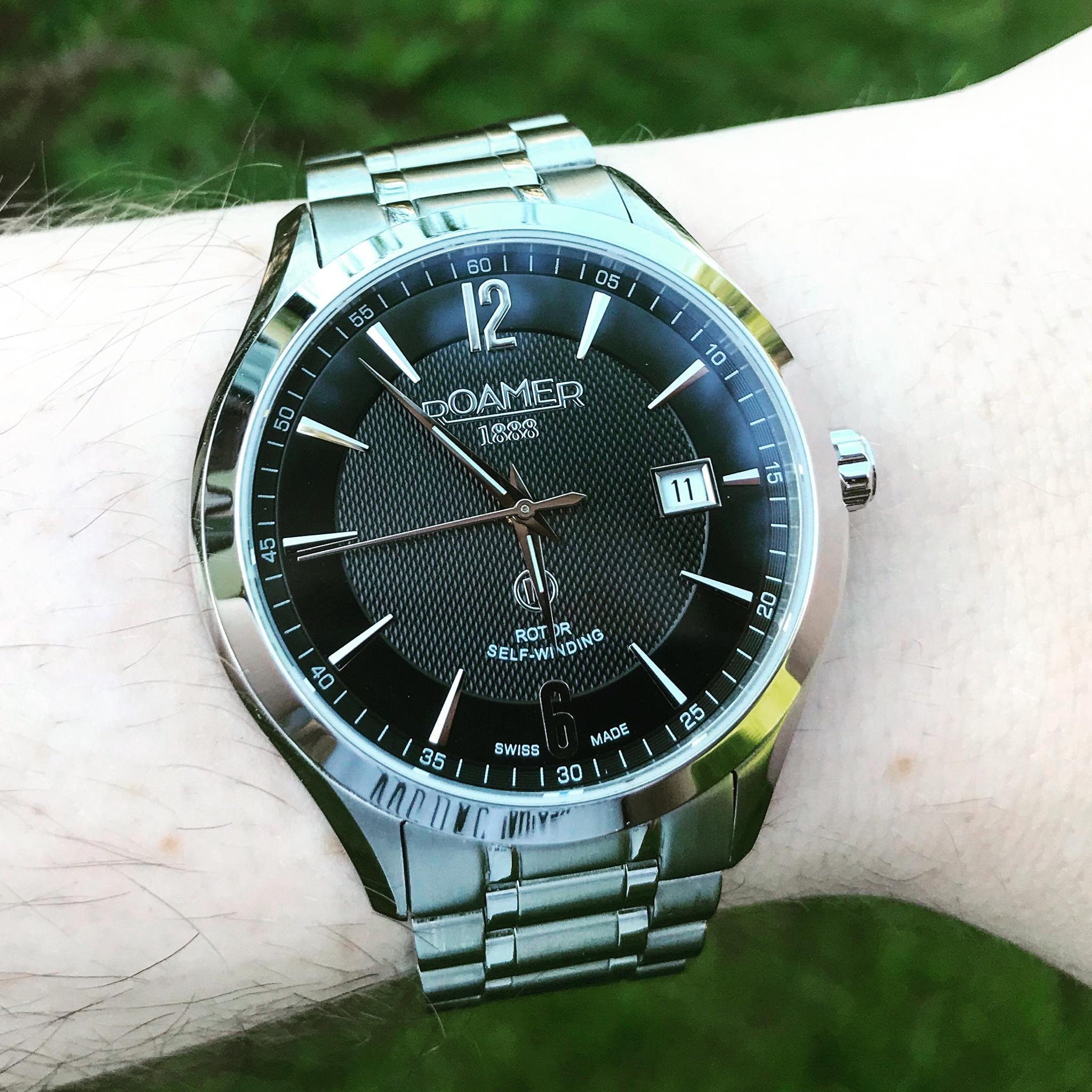 It's been in my collection for maybe 4 months. It has its flaws, which I have described in detail in my review of it here:
https://wahawatches.com/review-roamer-mechaline-pro/
It's been on warranty repair, the issue was resolved. Because it was a reward from a motivational program, I could do so at the importer, but officially it does not have a warranty. Original box.
The MSRP is 599 CHF, which is over $650. Asking $450, but you're free to haggle. 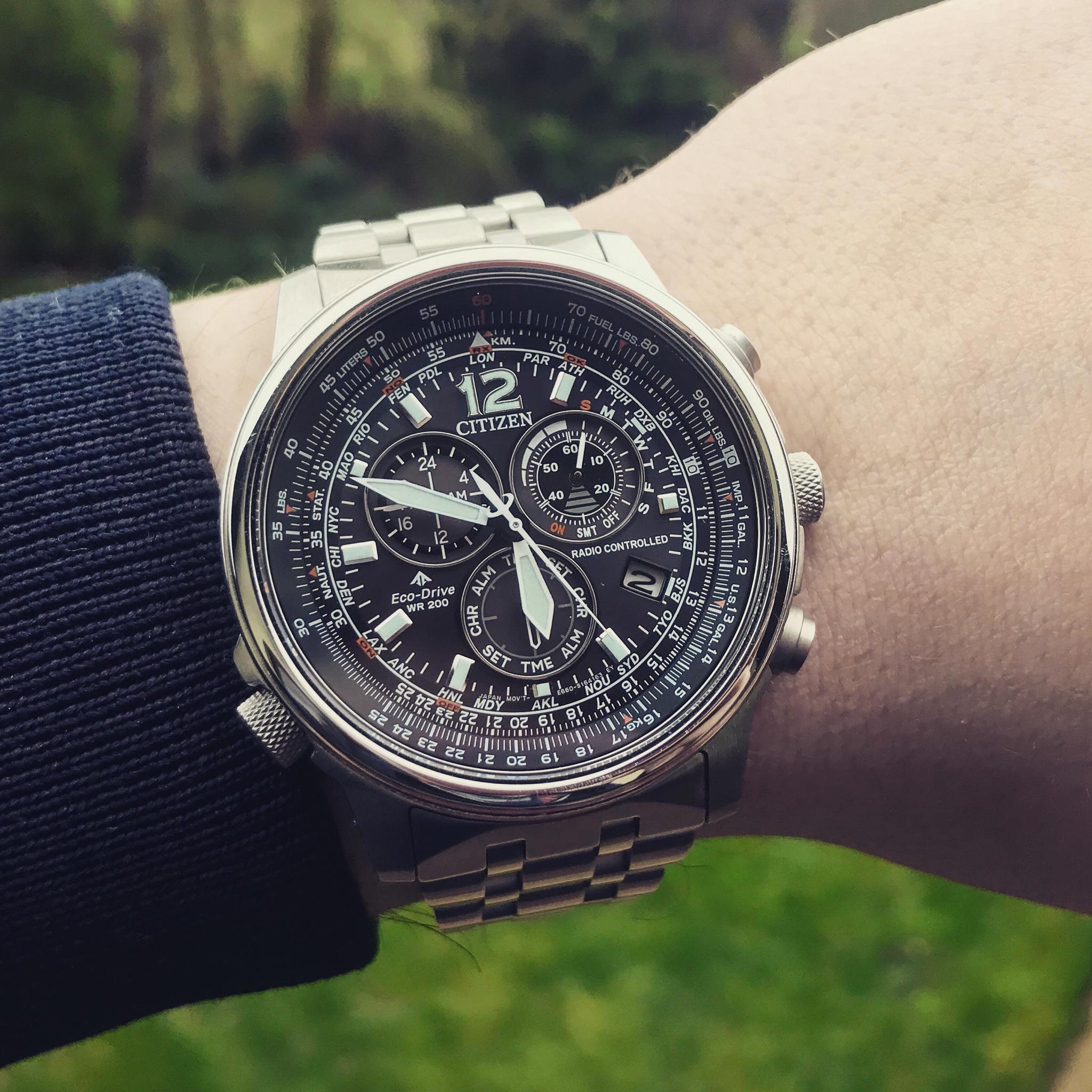 It's a big and heavy bastard. Which doesn't bother me much, but I simply don't need all its functions, and I found myself wearing it less and less. Sure, it's maintenance-and-worry-free, but I'd rather see it go to a good home, where it will get all the wrist time it deserves. Europe-only model. Same as with the Roamer - no warranty. Some scratches, mostly against the furniture at work. Box, spare links left after bracelet sizing, and instructions manual included. The retail for this one is 499 euro, which is around 590 USD. Asking $370. 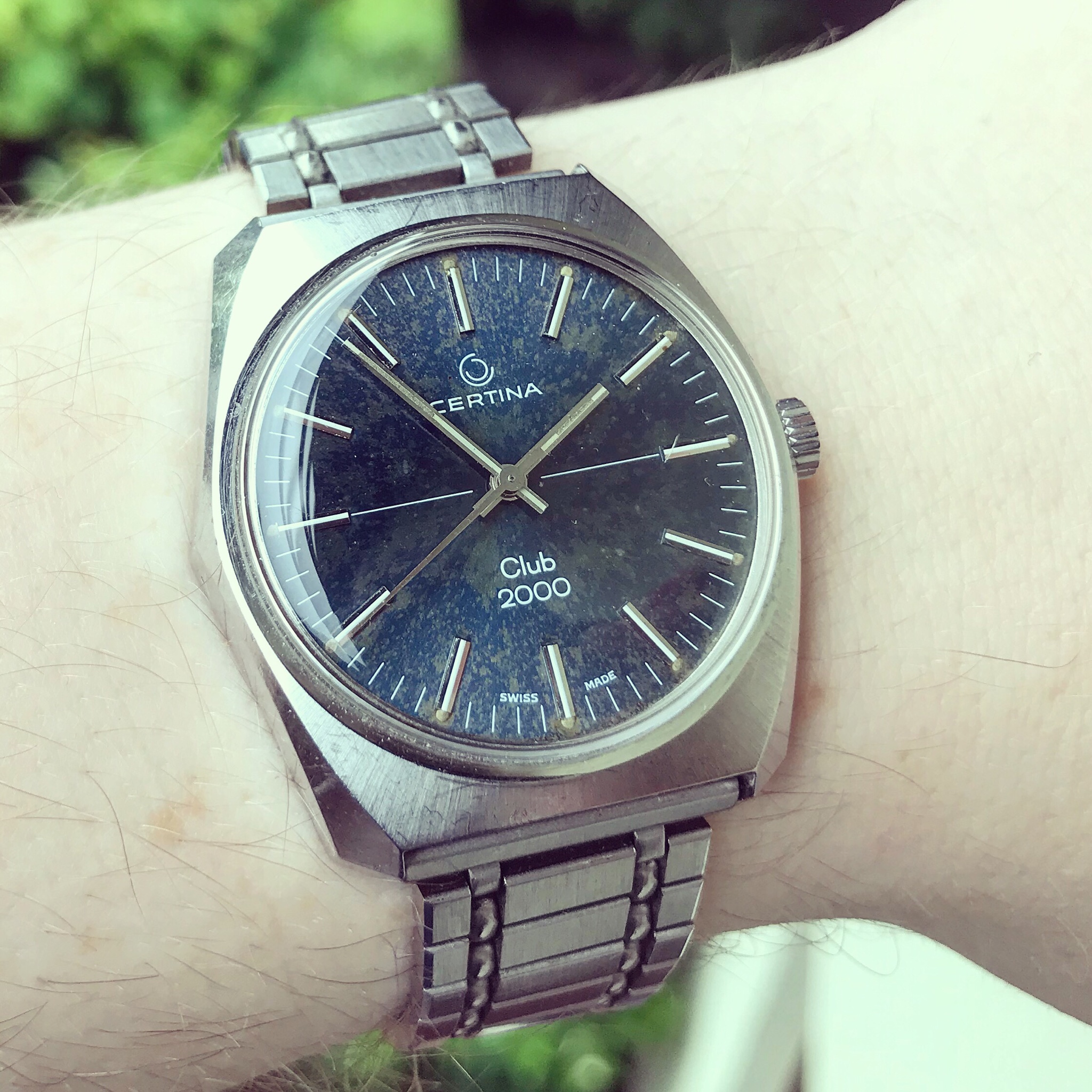 Heyyy, want to get fleeced for a "tropical dial?" Well, I'm not the Donkeys, I have one for sale, but I won't fleece you for it...too badly. For a living I work as a Ferengi salesman, I got to have some profit, I'm just settling for not as much of it.
The watch has been serviced, however...recently, the crystal came loose. Once a plexi - even an armoured one, like in this watch - settles in, it can turn out that it is one size too small, even though it used to fit. Doesn't fall out, but it is turning, while it shouldn't.
A report from the service by my buddy:
https://wahawatches.com/service-certina ... -movement/ 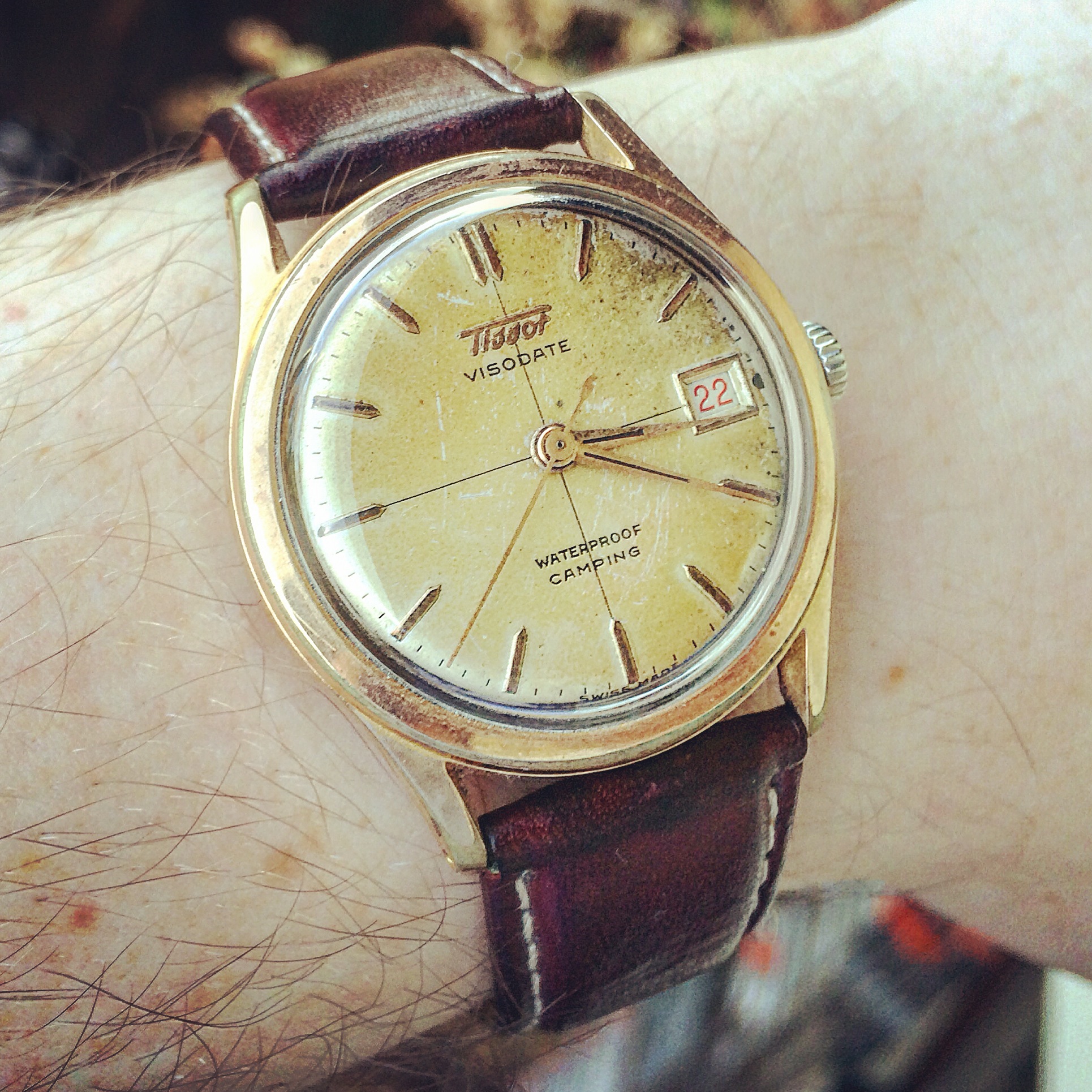 Cal. 27B-621. No quickset or semi-quickset. A bit mangled, the case isn't in that good a shape by the case back... Wouldn't blame you if you ditched the case and had it placed in a new one... Needs a new crown. Was serviced something like 4-5 years ago, can't bloody remember. Best if you do get it serviced.
Asking $90, which is probably what it's worth if you'd sell it for parts piece by piece. 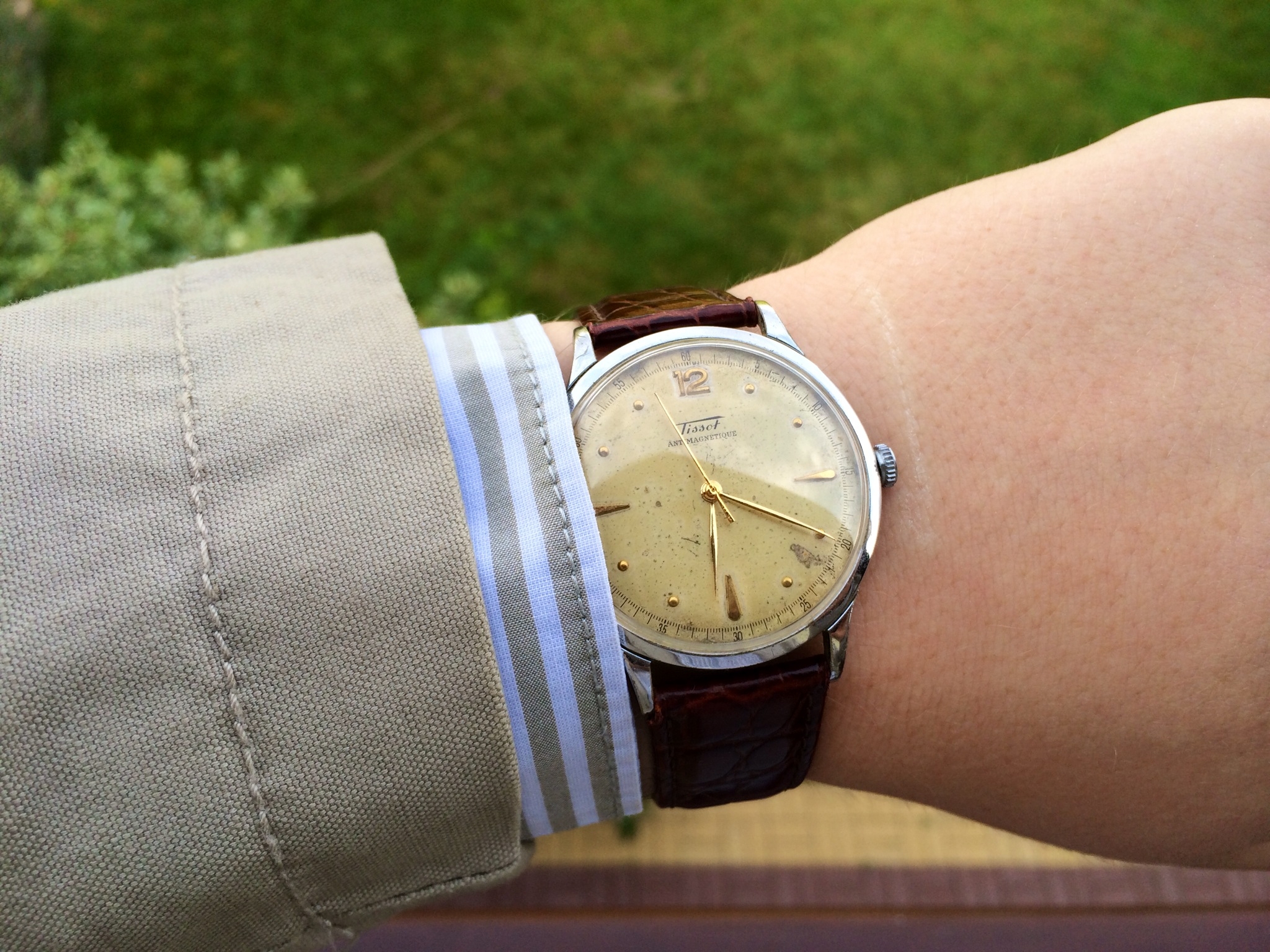 This 1950s behemoth has seen better days. The movement - Tissot cal.27-2 - needs a new balance complete. That said, doesn't work and needs reviving The seconds hand is broken or is an incorrect replacement. Chrome-plated case with quite some wear, the crown is a modern replacement. Asking $100. Can haggle, though. It's still a "jumbo." 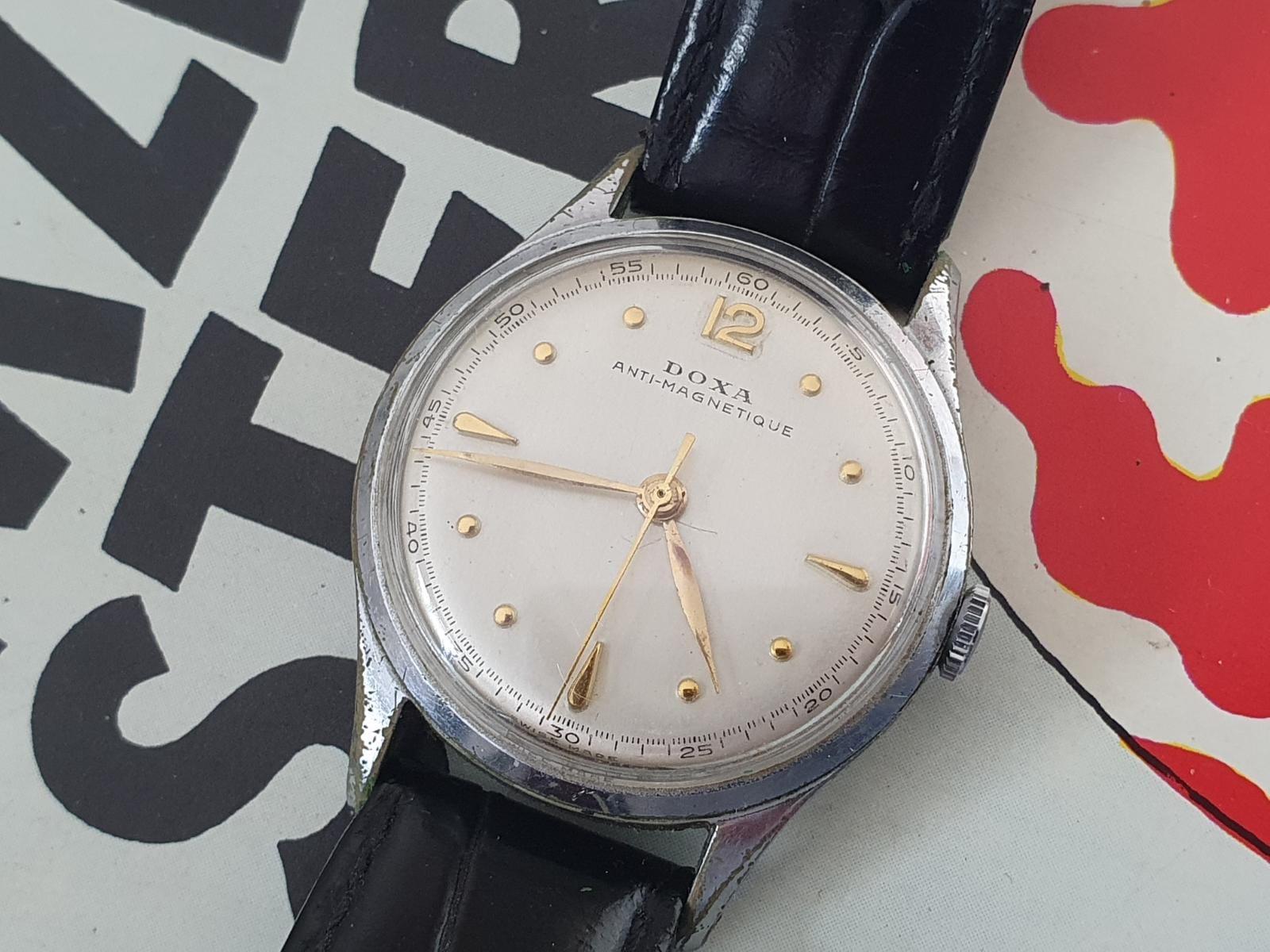 Dial in damn good shape, movement - ETA 1080 with Doxa-modified bridges - serviced this year. New crown. The case has its plating worn, as is often the problem with vintage, chrome-plated Doxas. Asking $140.

I'm in no particular rush to sell them, but unlike my usual take, I want to.
My manner of thinking, so you say, cannot be approved. Do you suppose I care? A poor fool indeed is he who adopts a manner of thinking for others!
Donatien Alphonse François, Marquis de Sade

Oh, and if you want more pictures or info about any particular watch, let me know. For now, I posted pics that I had earlier. Will take pics of the movements and case backs if anyone will be interested. So, easy, you will get to look at every bit of every watch.
My manner of thinking, so you say, cannot be approved. Do you suppose I care? A poor fool indeed is he who adopts a manner of thinking for others!
Donatien Alphonse François, Marquis de Sade

Nice stuff at fair prices, MK.
"Courage is knowing it might hurt, and doing it anyway. Stupidity is the same. And that's why life is hard."-Jeremy Goldberg

One of you stupid bastards should jump on these deals forthwith.

OK, I've added some more watches for sale to the ones I've listed here. And made a sales listing on WUS as well.

Reduced prices on the Citizen and the Roamer - 335 and 325 USD respectively.

Shipping the vintage watches or one modern watch with box to CONUS shouldn't be more than 50 bucks.

What say you?
My manner of thinking, so you say, cannot be approved. Do you suppose I care? A poor fool indeed is he who adopts a manner of thinking for others!
Donatien Alphonse François, Marquis de Sade
Post Reply
5 posts • Page 1 of 1

Return to “Watches for Sale”