So, which DOXA homage is the best?

So, which DOXA homage is the best?

For years, there was never really a true homage to the infamous DOXA diver. Suddenly, there are now 3 different vendors doing them, and with the help and graciousness of our own Svaglic, I'm going to attempt to give my spin on which is overall the best, and also being as cheap as a Scotsman, which is the best value.

Immediately below is still the best online review that I could find and I suggest you check it out also since I don't have an actual DOXA myself.

For this review, I have my own Maranaz Vintage Samui, the Seestern and the Tactical Frog, the last two courtesy of Allison. My cell actually took better pics than my old trusty Canon Sureshot!!!

Let's go item by item and rate each accordingly:


1. MOVEMENT:
All three use the Seiko NH35, so let's give them equal points for that. I read that Maranaz regulates their movement but I have not been able to confirm that. No clear winner.

2. CROWN:
The Frog seems a bit rougher than the other two, and not quite as smooth. One thing I did note was that both the Maranaz and the Seestern also have an O ring gasket in the stem, which is absent on the Frog. Also the crown on the Seestern is slightly larger and more robust. Winner.....Seestern.

3. BEZEL:
I won't go into the tachymeter bezel on the Frog, suffice it to say that this is supposed to be removed in the latest version due out in October. More info here:

There is some, but very minor backplay on the Frog, but it's still tight. The Seestern is the most DOXA-like in its markings, however there is no lume pip. Both are very solid. With the absence of the pip, I would say the Winner is Maranaz.


4. CASE.
Width without the crown is 41mm for the Maranaz, and 42 for both the Frog and Seestern. I don't have a caliper so I'm eyeballing this. As you can see from the pic, the Maranaz and the Frog have the same case shape and width, and I assume they are from the same factory, Glamour Master (?). The difference is in the bezel height and crystal, giving the Maranaz 14mm (domed sapphire), the Frog at 12mm (very slight raised crystal) and the Seestern at 14mm with a recessed crystal. Without weighing them, the Seestern seems heavier.

I should also note that the finishing on each is pretty comparable. Not too rough on the brushing and I was expecting the Frog and Seestern to be rougher. All things considered, especially with the domed crystal I would give the nod to the Maranaz, however if you want the regular Samui, it does not have the domed crystal so I would give this one a tie: Maranaz and Frog


5. BRACELET:
This is a bit tougher. All 3 are 20mm with a taper to 18mm at the clasp.
The Maranaz and the Steestern both have 4 micro adjustments, versus 3 for the Frog, however the Frog also has a push button in addition to the flip safety. HOWEVER....the Frog also uses male end links which make is overhang a bit more. Neither the Seestern nor the Maranaz use them, there are female end links to they give a better fit in my opinion.

Given it is more like a true BOR, in addition to the 4 micro adjustments and female end links, Winner is Maranaz.


6. DIAL:
Another tough category. My watch has the silver sunburst pattern, while the other 2 appear to be a matte color. From what I read online, the version 2 of the Frog will remove the name Tactical Frog from the dial. Also, in corresponding with Sara from Maranaz, their dials are gloss which will be on both the regular and vintage Samui. The Frog has very nice applied markers, missing from the Seestern, and are more prominent than on the Maranaz.
Pics for comparison....

I'm also including a pic of the Seestern and Maranaz that I pinched off Facebook, showing their version of the turquoise/aqua dial.

For me, the Seestern dial does not really "pop" at all in person. Without having the gloss dial Maranaz to compare to and considering the better markers.....Winner...Tactical Frog


Now the big question.....which is better value and most bang for your buck?

I can eliminate the Seestern right away. My experience in wearing it is similar to Allison's....it's too top heavy and doesn't feel good. Also, when I bend my wrist up, the crown digs into my hand a bit which a big turn off. I would be remiss if I also didn't report that there have been several collectors on Facebook and on WIT that have received empty boxes when ordering this watch. More than one is not an isolated instance with a relatively new vendor, so I would not recommend the Seestern at all until this issue is resolved.

So.....Frog or Maranaz? I really want to see the 2nd version of the Frog when it is released. I have emailed the various vendors, WR Watches and Heimdallr for more info, especially on the male end links on the bracelet, but no clear reply, only that the bezel will not be tachymeter and the full name is off the dial.

The current pricing for the Maranaz is $399, not including shipping and the Frog is $179, less shipping (Heimdallr has a coupon code for 10 buck off (welcome10). Same movements in each is also a big consideration.
Is the Maranaz overpriced? Maybe....considering the watch only, it seems to be the best made. My personal choice was clear, as I also wanted the silver sunburst homage to the Doxa Searambler so I was willing to pay more.

When you factor in all of the above and if you can live with some of the quirks, the Tactical Frog really is the better value for the price.

I'll update this once the 2nd version is released, as I'm sure there will be another onslaught of You Tubers doing comparisons. This phrase has been repeated often at Watchlords, and now that there are other affordable choices available, it is even more relevant....FUCK DOXA!


If you would like to see the watches yourself, please let me and Allison know, otherwise I will ship them back to her in a few days.

Thanks Jas, I enjoyed the review and comparisons.

Anyone wanting to handle the Frog and Seestern in person, feel free to do so. Keep them for a week or so and wear them to see how you like them.
Instead of me getting them back, I’m fine with passing them around and an auction at the end to benefit the forum.
It's easier to fool people than to convince them that they have been fooled.

Awesome look at all three. Good job JAS and Svaglic.

Appreciate the offer but am on hold for buying for a bit. Eager to see the 2nd version of the Frog.
"Courage is knowing it might hurt, and doing it anyway. Stupidity is the same. And that's why life is hard."-Jeremy Goldberg

A superb review, John, and kudos to svaggie for loaning the watches.

I myself owned a Doxa Diving Star way back, before Doxa became a thing; it was a pretty good watch, but not worth what I paid for it.

I received this message from Maranaz after I posted the review....


Hi John,
I haven't seen the Frog in real life but the Seestern case is very similar to the regular Samui only the vintage has the thinner case.
Guess now I have to get me a Tactical Frog as well.
Regards Sara

I like the dial on the Maranez and also the BOR bracelet.

Nice review! Thanks for taking the time to add clarity.

Will have to wait for that new Frog, just in case they make some additional changes on account of your review.

Fantastic review! It’s awesome that we can have a true conversation about what is best without name calling or other crap that gets in the way. It’s truly refreshing. You look up reviews even on a watch you know is crap but there it is in black and white a bunch of GLOWING reviews! I’d like to thank JAS and Svaglic for making this happen.

Great review and kudos John and svaglic. Very cool to see them all together and that Maranaz actually replied. Partial to the turquoise over here.

I will make an exception, nice review and a big thanks to Allison to allow her watches to leave home and John for doing this.

I purchased the one below yesterday 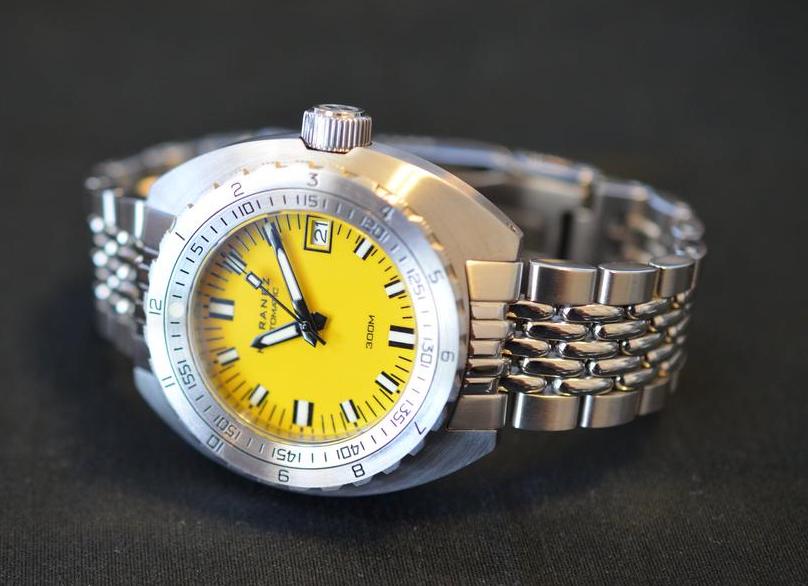 "wound up halfway under a slab of cement in the Pentagon on 9/11. 17 surgeries over a 28-month period"
"Legion of Merit, Purple Heart with Gold Star, 8 Air Medals"
Stolen Valor by Misterjingles

Darksider wrote: ↑
Thu Sep 30, 2021 3:43 pm
I will make an exception, nice review and a big thanks to Allison to allow her watches to leave home and John for doing this.

I purchased the one below yesterday

Very nice! Let us know your thoughts when you get it. We can keep them all in this thread.

Got this from watchdives.com in response to my question about using female end links on the bracelet for the upcoming version 2

New version will be released by middle of Oct.
We will check once it is ready.

Roll up kit with extra bracelet links, nato and leather strap. Bezel aligned and tight. Easy to rotate bezel, matte yellow dial. Not sure I like the hands but that is an easy fix. Large crown makes easy to turn but could do without the date window.

Comfortable on the wrist. No lume shot yet. 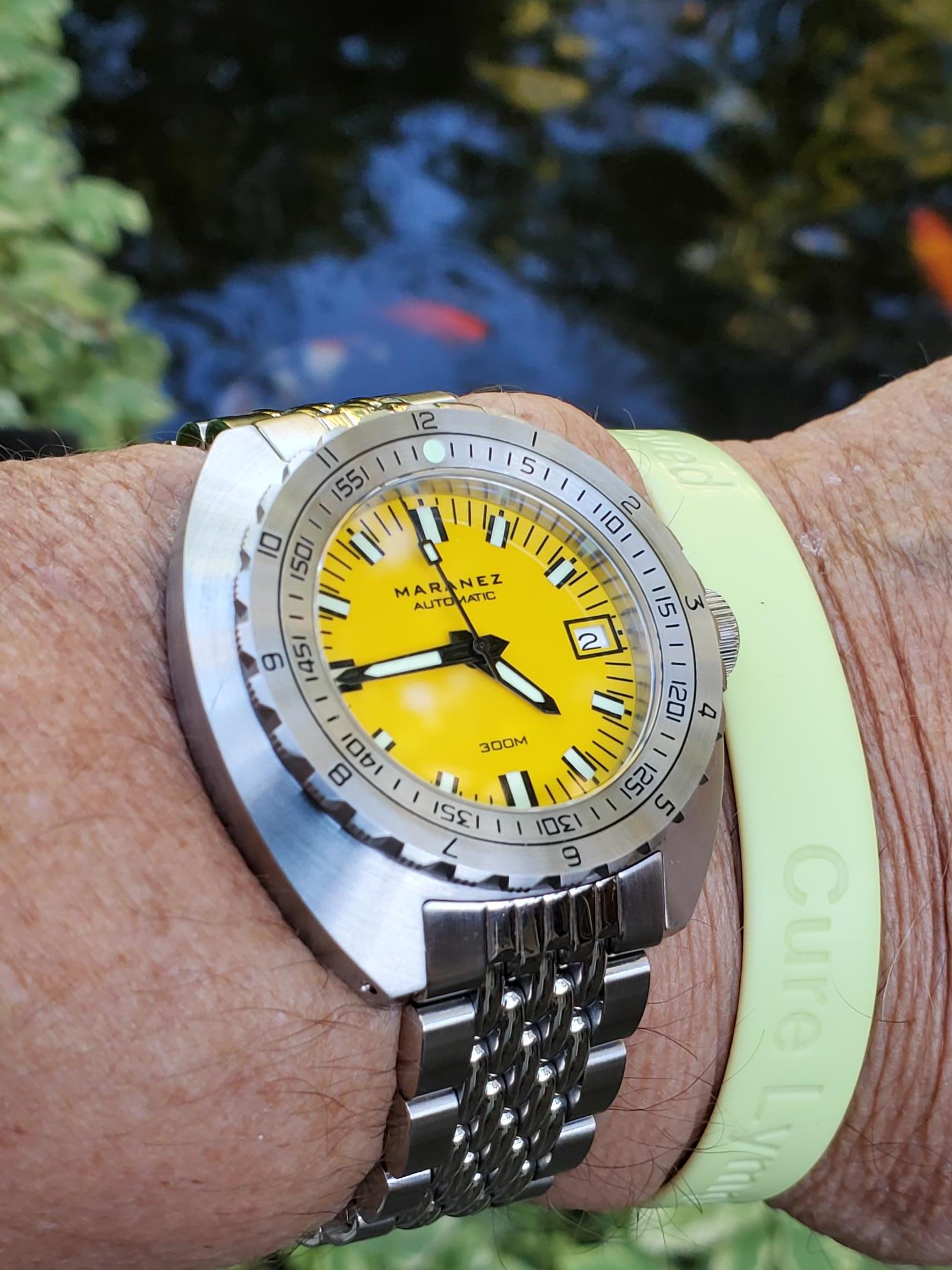 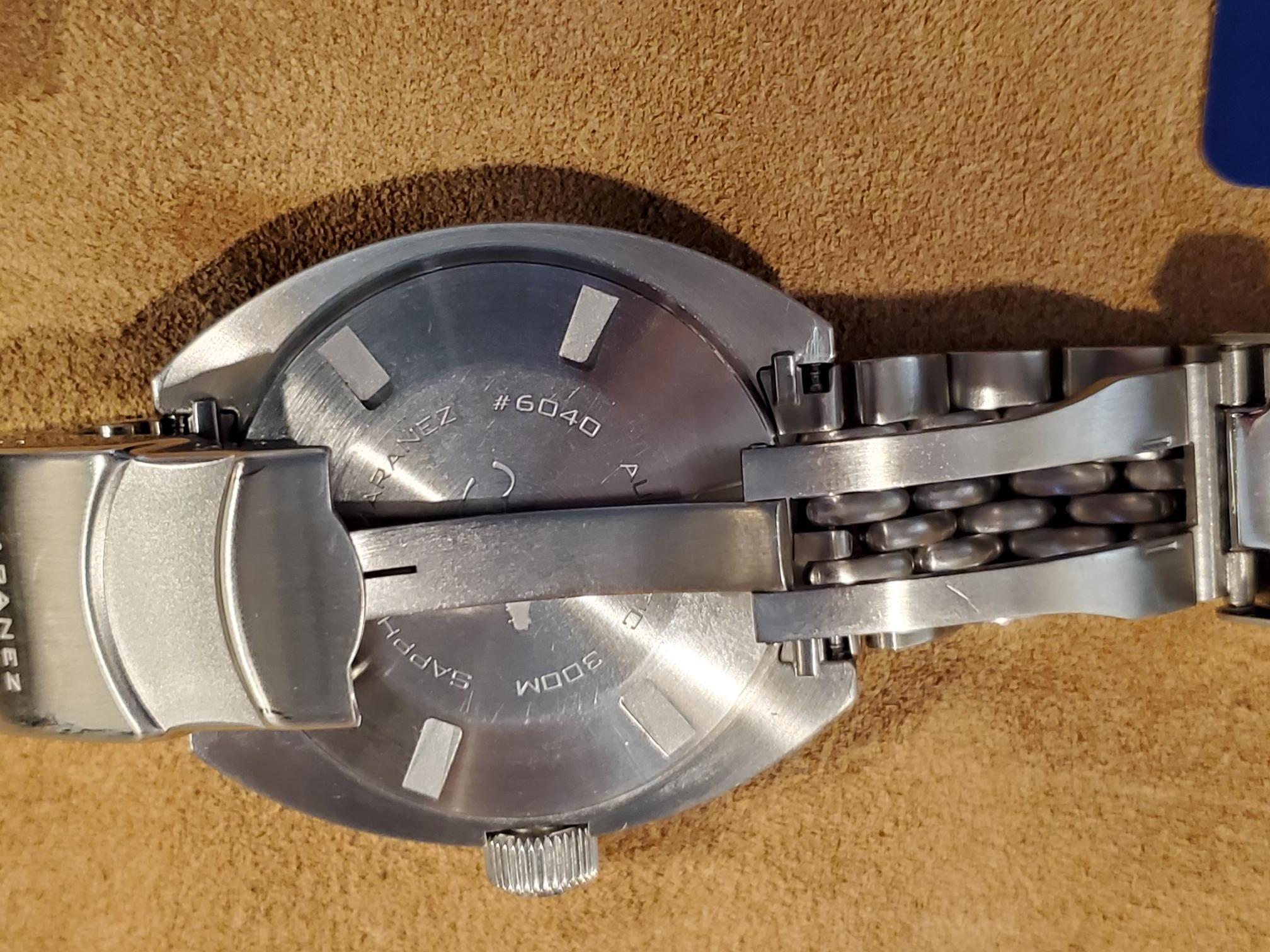 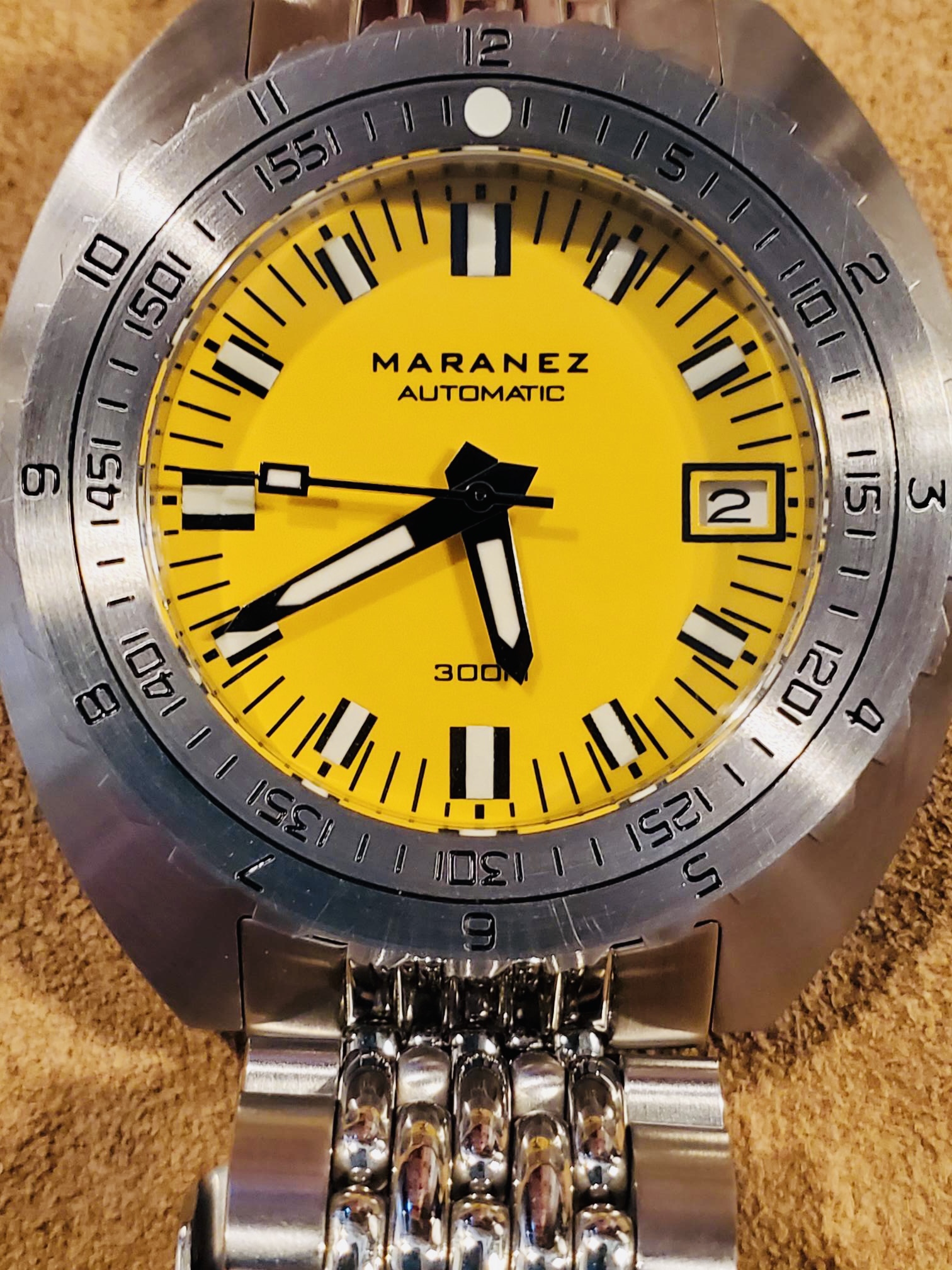 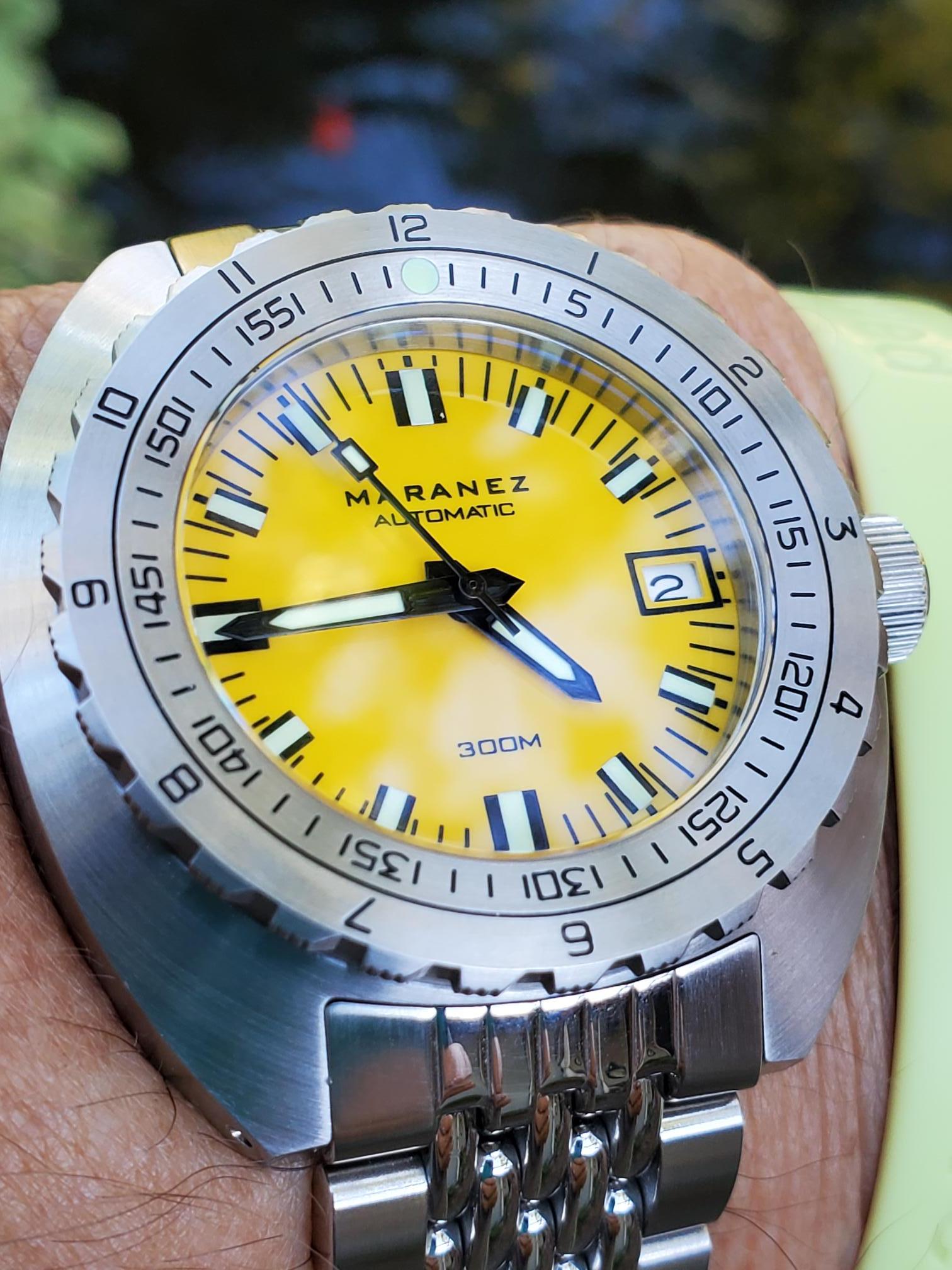 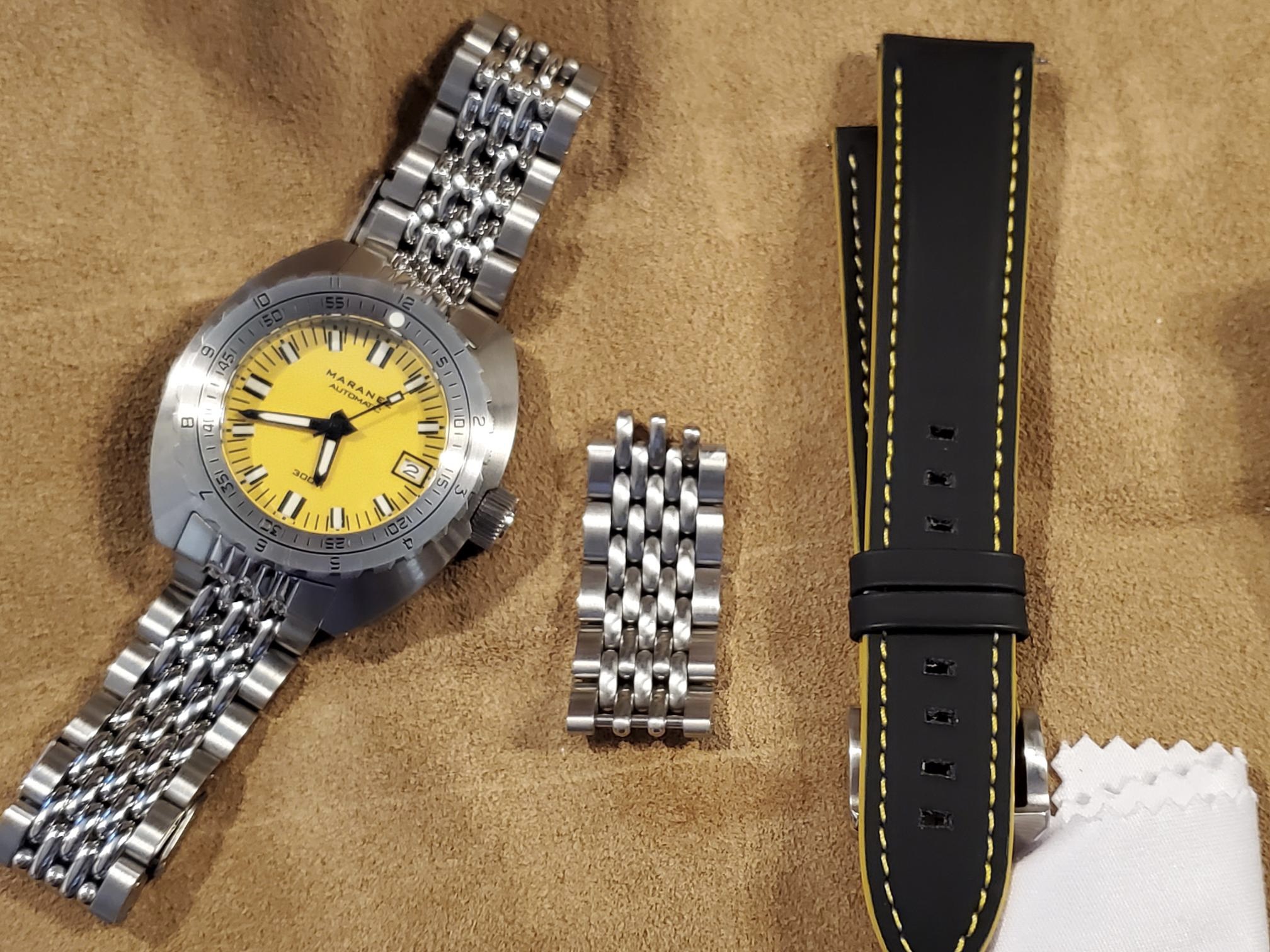 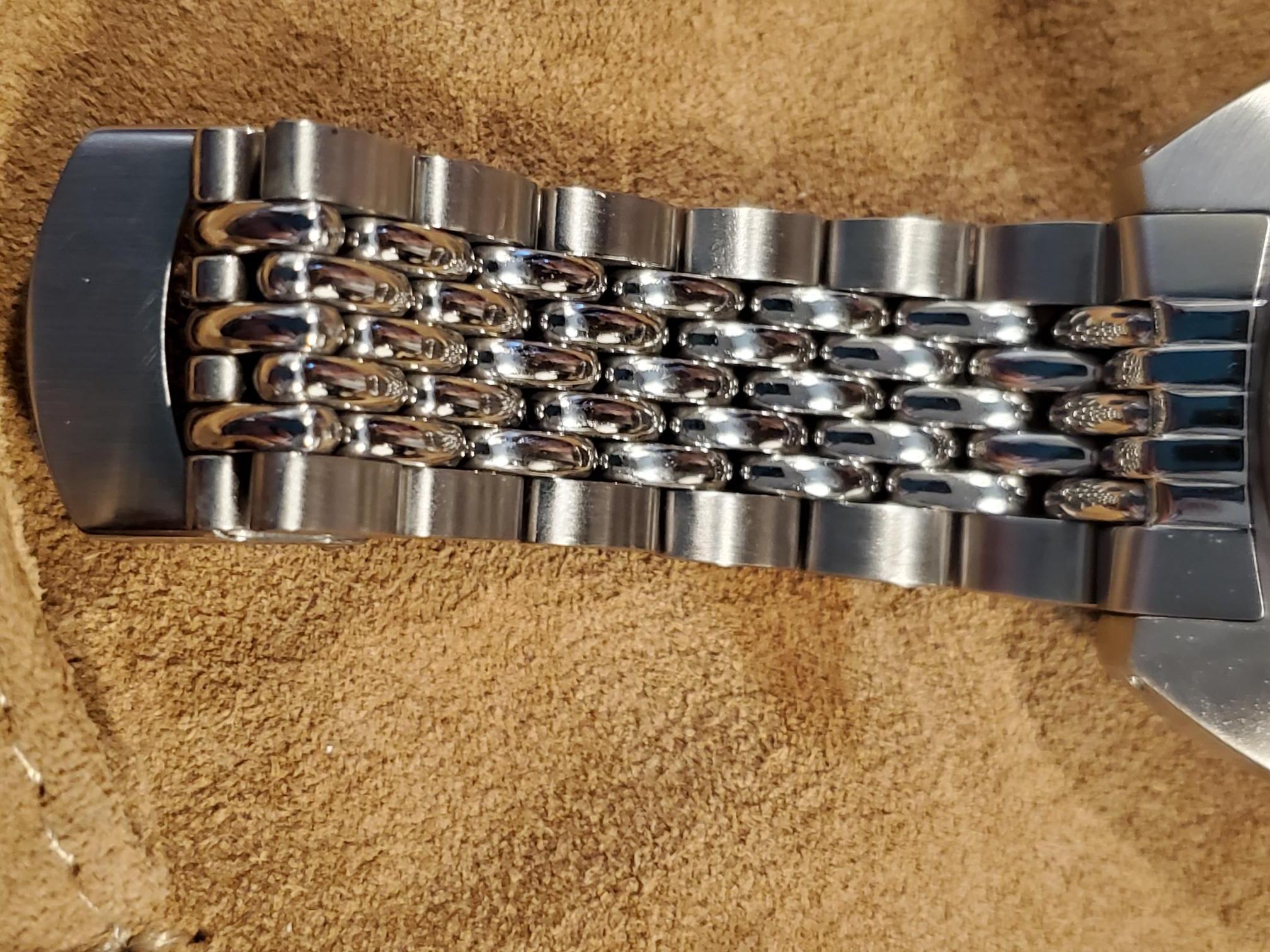 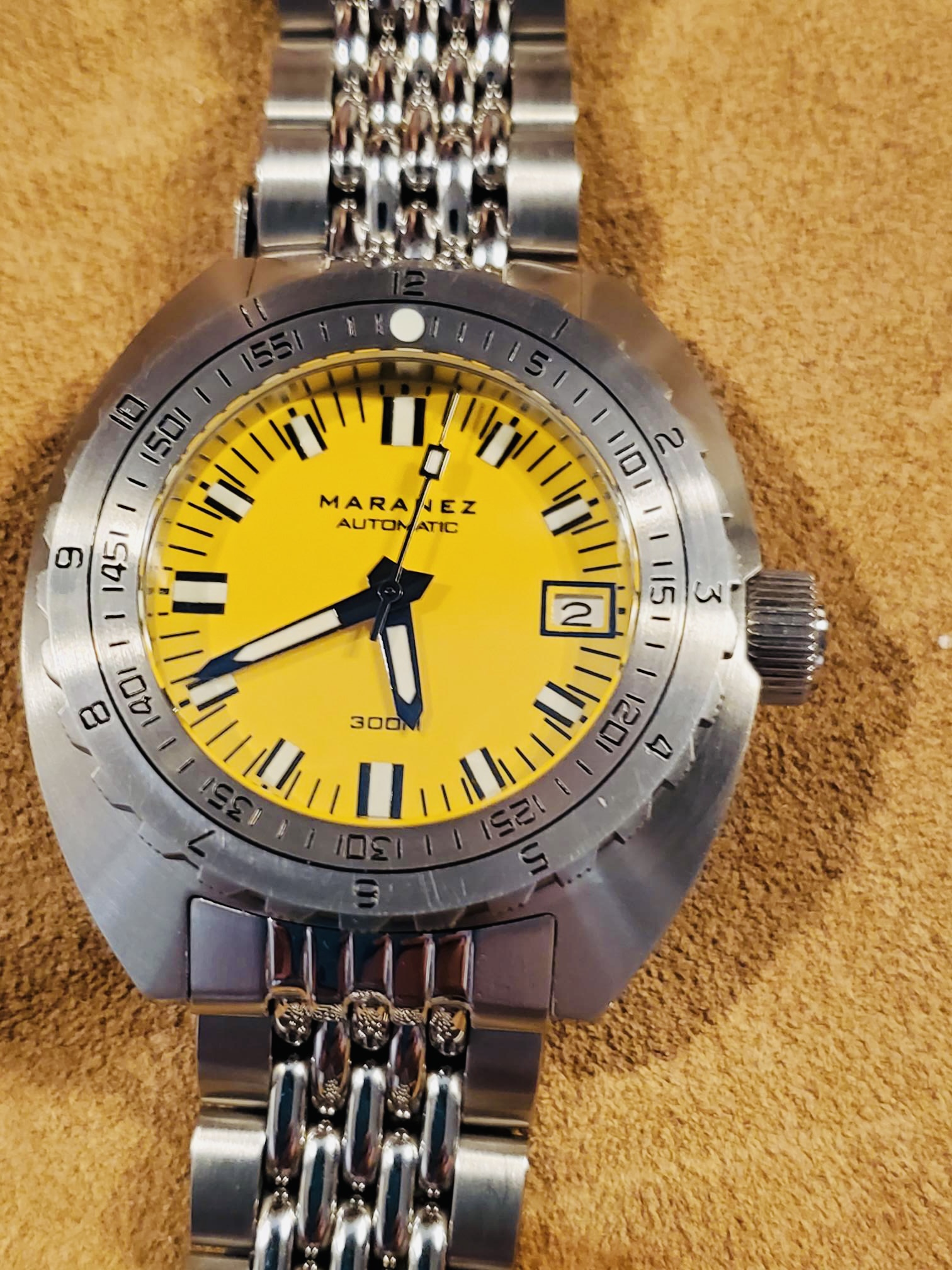 "wound up halfway under a slab of cement in the Pentagon on 9/11. 17 surgeries over a 28-month period"
"Legion of Merit, Purple Heart with Gold Star, 8 Air Medals"
Stolen Valor by Misterjingles

Looks really sharp.
"Courage is knowing it might hurt, and doing it anyway. Stupidity is the same. And that's why life is hard."-Jeremy Goldberg

I'll be putting together the auction very soon

Seestern is now showing a no date, which I really prefer, and NH38 movement

New version of the Frog is now available

Screenshot_20211013-093553.png
You do not have the required permissions to view the files attached to this post.

Review of the Seestern V2