Indiana Loser and the Shithole of Doom

A place for everything else, such as automotive, entertainment, humor etc. Just leave out politics and religion.
Post Reply
4 posts • Page 1 of 1

Indiana Loser and the Shithole of Doom

Recently, having a free day, I drove to the edge of the Kampinos forest near Warsaw. Just felt the need to go somewhere for the sake of sightseeing, to satisfy the wanderlust. 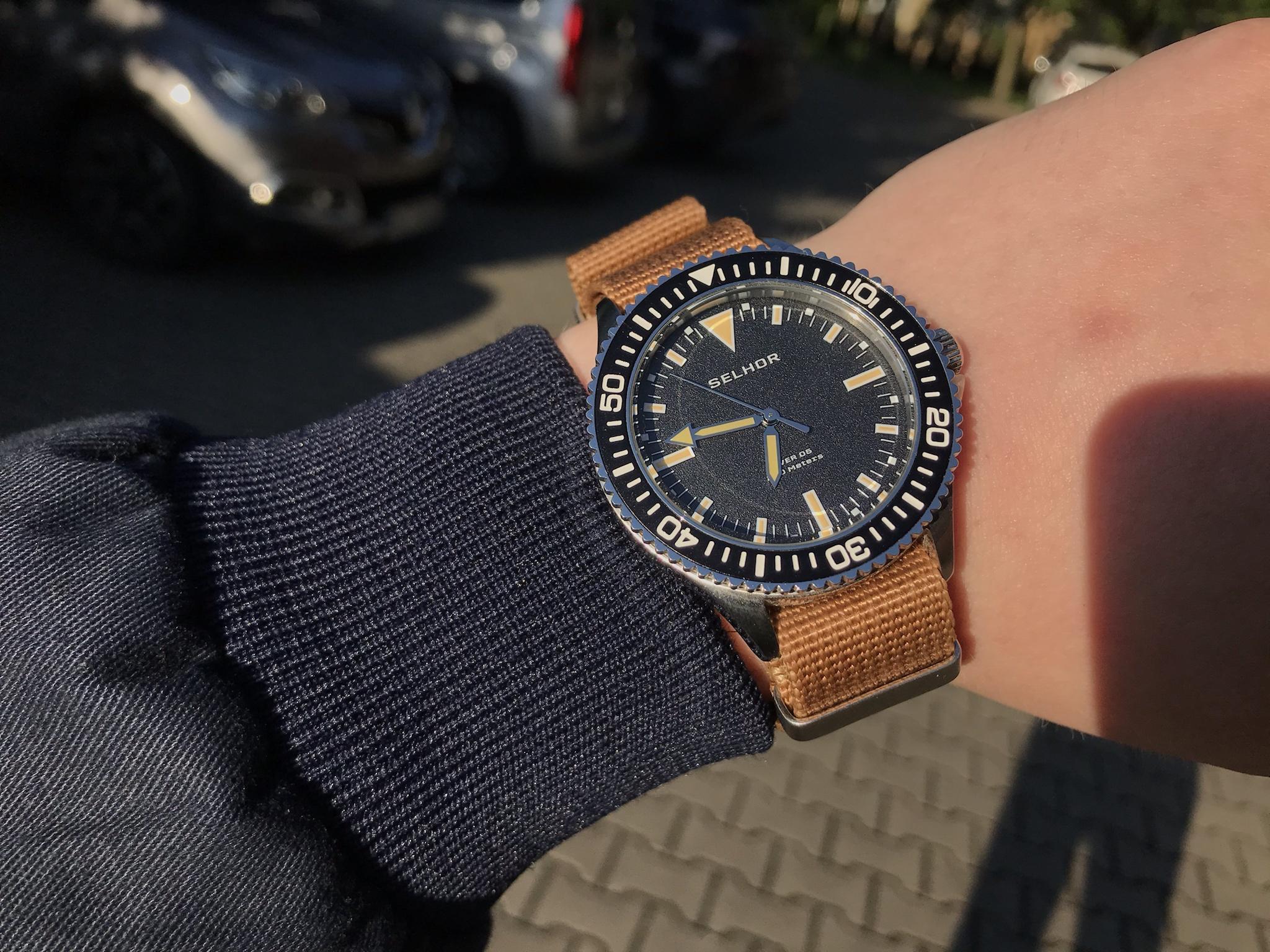 My horological companion on this trip

I would be surprised if you knew the place. Kampinos is a national park closest to Warsaw, a dense forest listed on the UNESCO world list of biosphere reserves, covering over 385 square kilometres.
It is also a place full of history. Just driving along its southern edge, you will find a few cemeteries from a few wars. The oldest monument is the Insurgents' Oak, where in 1863 the Imperial Russian army executed a number of participants of the January Uprising.

Kampinos is also a mecca of paranormal investigators. This has its roots in the scores of events that give this beautiful heartland an eerie vibe. Fighting between insurgent forces and the Russians in 1863. World War I clashes between Germans and Russians.
And then there's World War II. Kampinos was the perfect place for the Home Army partisans, the "Kampinos Division" to be precise. When my grandfather was a kid, he used to smuggle coded messages on his bicycle to Home Army liaison officers and scouts. When his father got word that the Wehrmacht is conducting a thorough search of the farms in search of Jews in hiding, he contacted the Home Army to secure the Jews he's been hiding in a crawlspace beneath the barn a safe passage to the relative safety of the partisan-controlled woods.
The Home Army in Kampinos often ambushed Wehrmacht and SS detachments, keeping the place ringing out with gunshots every day.
As it happens with forests, the Nazis liked this place too, as a place to execute political prisoners, POWs, and anyone who had the misfortune to get under their itchy trigger finger.

All in all, once you're off the beaten track, without a single man-made thing in sight, you're out of time so much so, that imagination can serve you the echo of jackboots and crackling noise of the partisans' Stens.

Passing through Leszno, I stopped by the cemetery where my cousin is buried. Not the worst place for a final rest, the breeze brings a fresh scent of the pines, because it's basically on the border of the vast woods.

Still having a few hours of daylight, I saw it fit to go exploring. Kampinos attracts with beautiful sights, but also...derelict villages. Yes, ghost villages in the middle of nowhere. Hey, that's some X-Files vibe right there!

I'm leaving the notorious Ghost Road for another expedition, and so I decided to go to a spot with stories to tell as well - the ruins of the village of Bromierzyk.

For what it's worth, I'm a skeptic about these matters. First and foremost, I've been doing some scouting before a larger expedition with a buddy of mine, who's an avid X-Files fan fascinated with the paranormal. I'm leaving debate about the composition of the universe we live in out of it.

Looking into "creepy tourism" blogs and press articles intended to generate publicity for the national park's tourist spots, I saw scores of absolutely silly claims. The wildest - yet not paranormal - one was that the area around the village is the Masovian Voivodeship's equivalent of Japan's Aokigahara Forest, and supposedly attracts a lot of people equipped with a stool and a rope. Can't blame them poor folks, it is a beautiful, yet eerie place. Sure enough, a hanging tree with nice sights around ain't the worst sort of hanging tree.
The paranormal claims could give a desperate screenwriter scores of ideas for a POS horror film. Full-bodied apparitions, including one of...a horse. Shadows, strange lights, disembodied voices and footsteps. Fuck, that sounds creepy. Spooky stuff or not, any reason is a reason good enough to attempt satisfying the need to go by the Starfleet ideas of exploration. 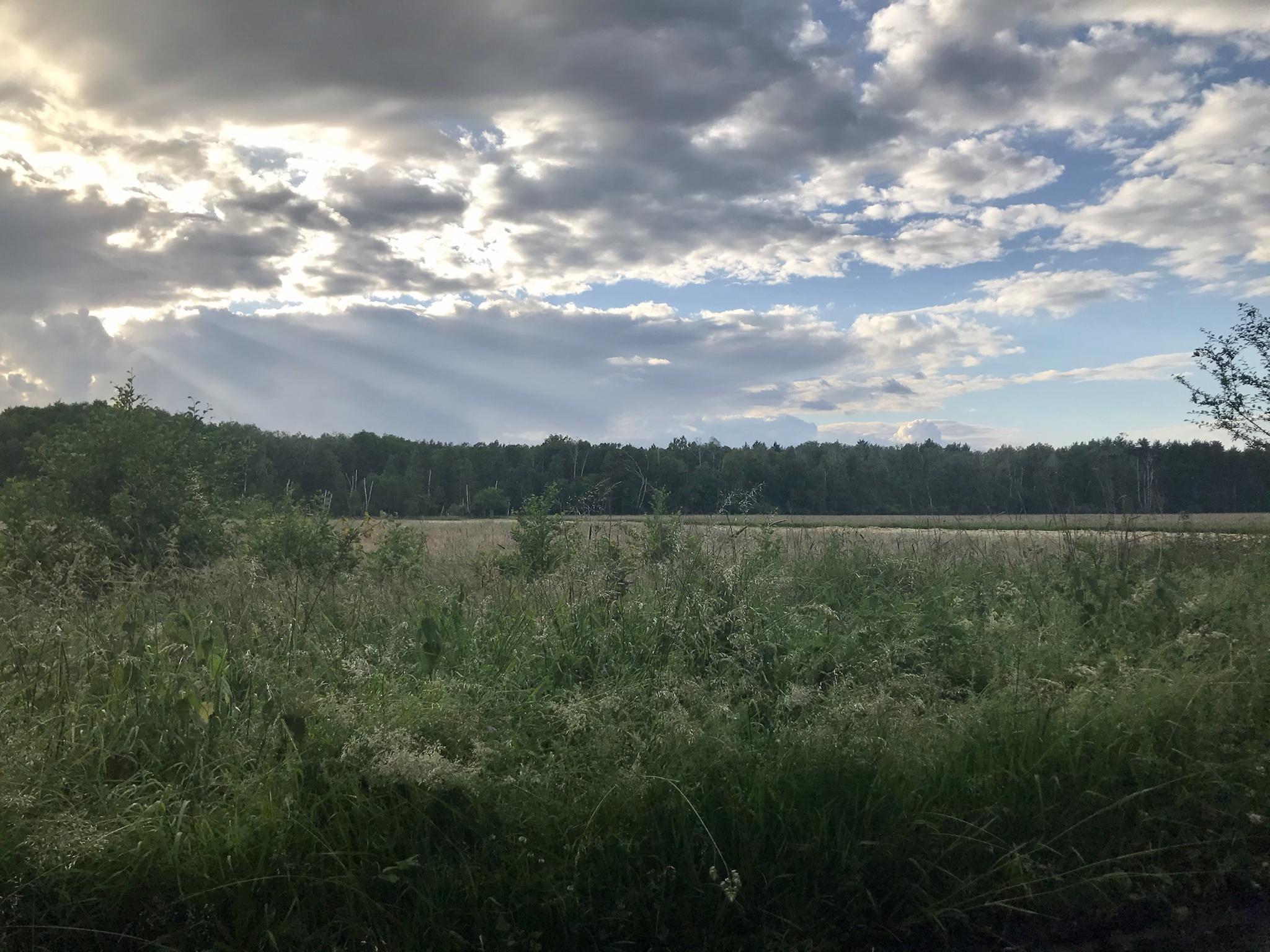 I'll be damned if this isn't a beautiful place to explore! 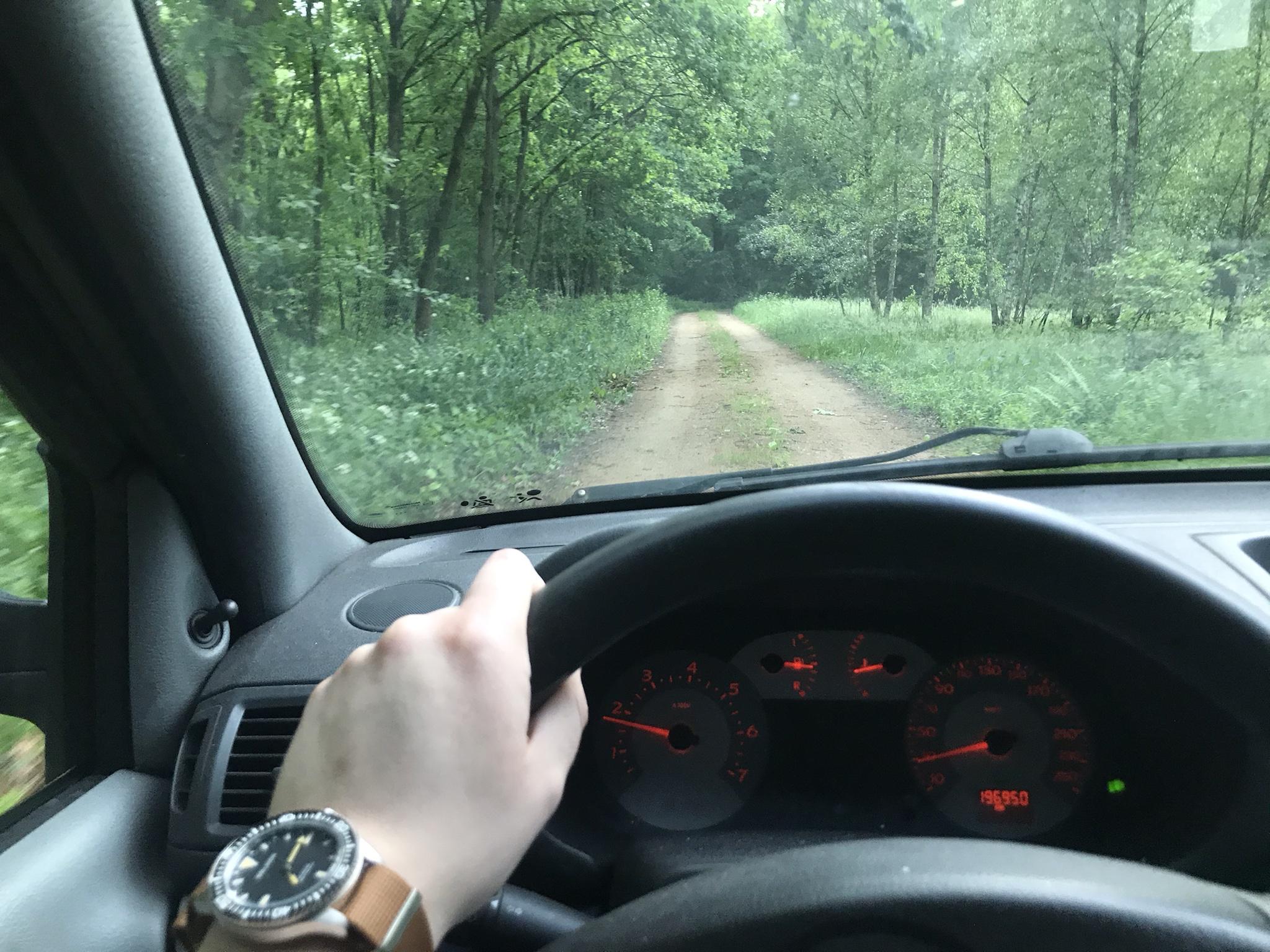 A scenic drive, no?

Alas, I have not made it to the ruins. I've been driving through where the sat-nav claimed the village was, but none of the landmarks were present. Whaaaaat? I made a right turn into the woods, no Bromierzyk. What the fuck? Another right turn. And...the car stopped. One of the wild claims was that if you turn off the engine, the phenomenon of battery drainage will prevent you from restarting the car.
That's debunked. The ignition worked perfectly. Only the car got stuck, the soft soil underneath the leaves and pine needles was too soft for the wheels to handle. The front wheels got buried.

What did I, ever the intrepid explorer (mostly of whisky bottles, but I can't allow myself to demean myself too much), do? Drenched in sweat and with mud all over me after attempts to get the potty Renault unstuck, I called a tow truck.

The sun has set, and I've been still waiting. Took a stroll around to find the ruins, but to no avail, and I preferred not to move away too far from the car. Let's not forget that this is also a wildlife reserve, and there are wild boars, and this is Poland, not Texas. I don't carry a hand cannon around, I don't even fucking have one. Upon hearing some rustling of deer, and possibly boars indeed, I decided to use vocals to chase the wildlife away. Poor wild boars, their ears were traumatized with my best take on Wanted Man by Johnny Cash.

Upon that verse, I had the proverbial shit scared out of me by a deer. Oh, fuck off, Bambi...

With hardly any light and dying battery in the phone, I focused on observing the area. Why not investigate, when presented with a chance? The "reports" covered a large radius around Bromierzyk. If not for the stories, it would be anything but eerie. Beautiful clearings in the woods, birds singing...
Ghosts - spectral light orbs, shadows, footsteps? None of that. Not a single one. This supposedly haunted area, however, does leave you at a risk of being eaten alive. That's because while there were no ghosts, there was indeed a shitload of mosquitoes. And I'd stand no chance of gracing each and every one of these beasts with the "KURWA TWOJA MAĆ" that these little shits so fucking deserve.

When the tow truck arrived, I have learned that I've been maybe 300m away from the actual ruins. The tow truck guy did some exploring there himself, also without spooky experiences. However, that was the first time that he had to tow out a car in the area.
The tow was necessary - the car was not only dug in, the chassis rested on the stump of a tree hidden underneath the shroud of leaves and pine needles. I doubt even a 4x4 could handle that. Once the chassis is blocked on something, without a winch you're fucked.

I have returned home richer by a better notion of the area, and poorer by Polish Shitcoin (PLN) equivalent of fifty bucks for the tow.

However, I don't intend to stop exploring. I hope to deliver more of these stories, with an account of my experiences in various points of interest and sharing some local folk tales. It may not be far from home, and no feat to not so boldly go where scores have been before. However, it doesn't cost tons of gold to go on an adventure. All it takes is to dig a little deeper into the area just at your doorstep. Like every man's home is his castle, every Bloke's car is his USS Enterprise NCC-1701-D. Get your motor running. And...engage!
My manner of thinking, so you say, cannot be approved. Do you suppose I care? A poor fool indeed is he who adopts a manner of thinking for others!
Donatien Alphonse François, Marquis de Sade

That was very fun and engaging to read, Mr. Bloke.

Absolutely fantastic tale. Was sorry it was so short.

You have a gift with writing, MK.

Look forward to more tales of exploration.
"Courage is knowing it might hurt, and doing it anyway. Stupidity is the same. And that's why life is hard."-Jeremy Goldberg